Aldi has definitely increased its outdoor purchases over the years, from garden tools to shepherd’s crooks. They’ve also rolled out more furniture; a person could probably outfit a lot of their front and backyard just from Aldi. All of the Gardenline products are Special Buys, and getting a hold of Gardenline furniture is a matter of timing, as they tend to arrive in the spring and early summer. 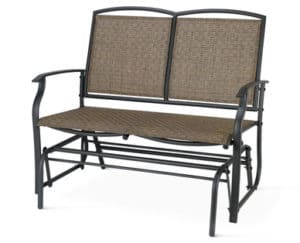 The Gardenline Double Glider pretty much is what you think: seating for two that glides back and forth. It’s not exactly a bench; think of it like a pair of sling chairs put together but with no middle armrest. Instead, the two slightly dipped seats are separated by a bar that sits flush with the seats and runs across the middle of the glider. The middle bar adds stability but also means that you’re going to be either sitting on one side of the chair or the other; straddling the middle is not comfortable.

Assembly was mostly okay. The instructions are easy to follow and Aldi has a number to call if you need help. A few of the steps are a little tricky just because they require both a delicate hand and a little bit of force, but if you’re patient, eventually it will come together.

Once assembled, it’s a nice chair to sit in. The seats are comfortable and the way the glider goes back and forth is pretty relaxing. The glider can start to squeak after a while, so spraying a little WD-40 in the joints from time to time is a good idea. Also, some of the screws can come loose after long periods of use, so it’s a good idea to tighten the bolts and caps from time to time.

Most of the pieces appear to be perhaps as thick as your finger. I didn’t see any weight limits on the box or in the instructions, although I’m not sure how the swing would hold up with, say, two very heavy occupants, so be aware of that. This reviewer has had a Double Glider for a few years now, so they do seem to be capable of a good life span. Of course, as inexpensive as the glider is, that may or may not matter to you.

UPDATE (March 2018): We originally purchased the swing in 2010, and we keep it under an awning that is mostly sheltered from rain and snow. It continues to hold up pretty well even all these years later. On the other hand, a relative of ours kept hers out in the open and the mesh seat tore apart after only a few seasons. Moral of the story: its longevity will probably depend on where you put it.

UPDATE (June 2020): Our glider is now ten years old, which makes this one of the longest-lasting Aldi products we’ve ever owned. Some of the screw caps still sometimes come out and we still have to oil it with WD-40 from time to time, but we’re nevertheless impressed that our glider has lasted so long. The key, for us, has been to keep it up under an awning, rather than in the open air, which has mostly kept it away from rain or snow.

It takes some work to assemble and you have to keep an eye on the parts, but for the price you probably won’t do much better.