After several fans on The Aldi Reviewer Discussion Group on Facebook mentioned how good Aldi’s paella meal kit was, I had to pick up a box for myself. I was not disappointed. 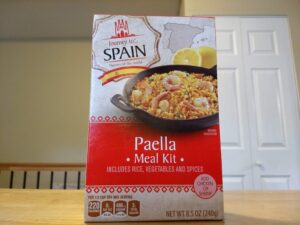 Aldi’s Journey to Spain Paella Meal Kit was one of several meal kits available as a limited-time ALDI Find (Special Buy), which means that once my store’s single shipment sold out, there would not be any more for a while.

One box serves four people, and my family of four (two adults and two kids) found this to be accurate. I served the meal alongside some Jiffy corn muffins and a bagged salad kit to round it out.

The directions indicate that you cook diced chicken to go with this meal kit, but I left out the chicken and instead added cooked shrimp at the end of the meal kit cooking process. I’m not sure how my alteration would affect nutrition information, but the box states that a prepared meal (containing added chicken, I assume) contains 390 calories per serving, along with 7 grams of total fat (9% of your daily value), 1 gram of saturated fat (5% DV), 85 mg of cholesterol (28% DV), 540 mg of sodium (23% DV), 49 grams of total carbohydrates (18% DV), 2 grams of total sugars, and 1 gram of added sugars (2% DV). One serving (prepared with chicken) has 31 grams of protein. 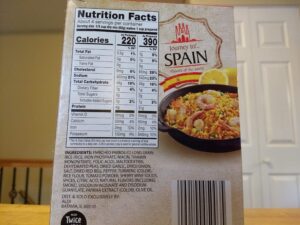 As you would expect with a boxed kit like this, there are some not-easily-recognized ingredients such as maltodextrin, disodium inosinate, disodium guanylate, and the cryptic “natural flavors,” including “smoke” flavor.

The meal is prepared on the stove top. In a medium skillet, cook 1 pound of cubed chicken in 1 tablespoon of olive oil. Saute for 10-15 minutes or until the chicken is fully cooked.

Stir in the seasoning pouch and the vegetables/rice pouch. Add 3 cups of water and stir to combine. Bring to a boil.

Reduce heat to medium and cook covered for 15-17 minutes, without stirring, until all liquid is absorbed and a crisp crust (socarrat) forms at the bottom.

Remove from heat and let stand five minutes before serving.

I had to cook the paella about 5-10 minutes longer than the instructions stated in order to get most of the liquid absorbed. I don’t know if my omitting the chicken had an effect on cooking time. I’m also not sure I exactly got the crisp crust (socarrat) on the bottom that is typical of a good paella; the rice stuck to the bottom of my pan and I wouldn’t have called it crispy, but it still tasted good. It was my first time making paella, so maybe that will improve with repeated attempts. 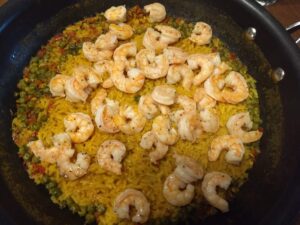 The finished product, with added shrimp.

The box mentions you can add chicken, shrimp, or tofu. As stated above, I added some shrimp sauted in butter, salt, and pepper to the paella after it had cooked.

My family heartily approved of this meal, and it quickly disappeared from the table. The rice was flavorful, with a bit of kick but not too spicy, and the cooked shrimp I added were a perfect complement. It made a good dinner without a lot of fussy preparation work on a weeknight, and I’ll probably pick up a few more boxes the next time this shows up on Aldi’s shelves.

Aldi’s Journey to Spain Paella Meal Kit cooks up easily in a skillet, and you can serve it meatless or customize it with chicken, shrimp, tofu, or any other meat of your choice. It’s not the healthiest food in terms of sodium, cholesterol, and some processed ingredients, but it does come together with a minimum of effort if you’re looking for a no-fuss dinner.