My family enjoys trying all the different kinds of seafood Aldi rotates into its stores during the late winter and early spring months, when many people are observing Lent. We especially like anything that includes shrimp or calamari, and the Specially Selected Seafood Paella Aldi recently sold included both. 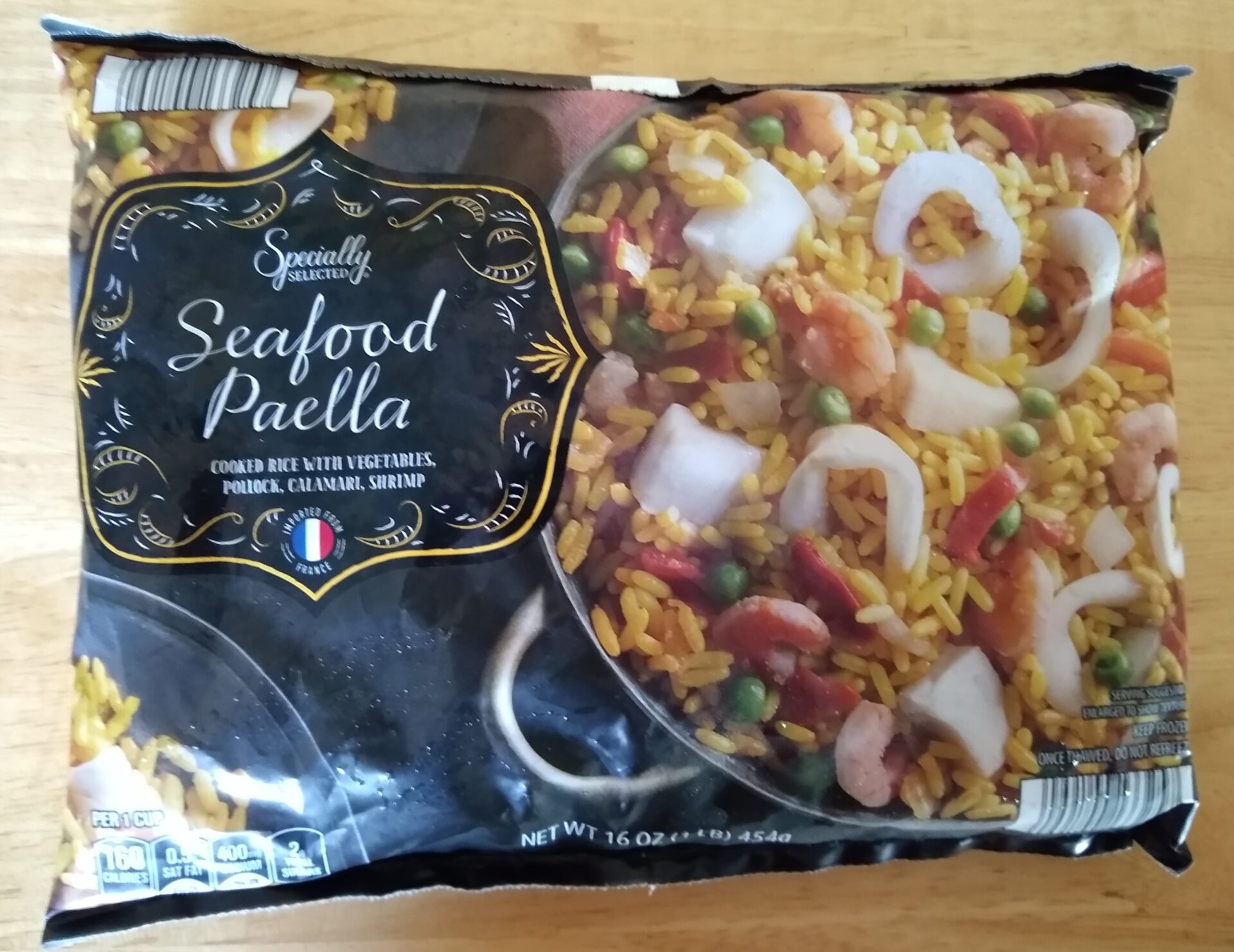 Specially Selected Seafood Paella cost $3.99 for a 16-oz. package at the time of publication. It’s an ALDI Find (Special Buy), which means it’s only in stores for a short time, and when it’s in stores it’s found in the freezer aisle. The package describes it as cooked rice with vegetables, pollock, calamari, and shrimp. It’s a product of France.

People with allergies should be aware this has (not surprisingly) fish and crustacean shellfish. 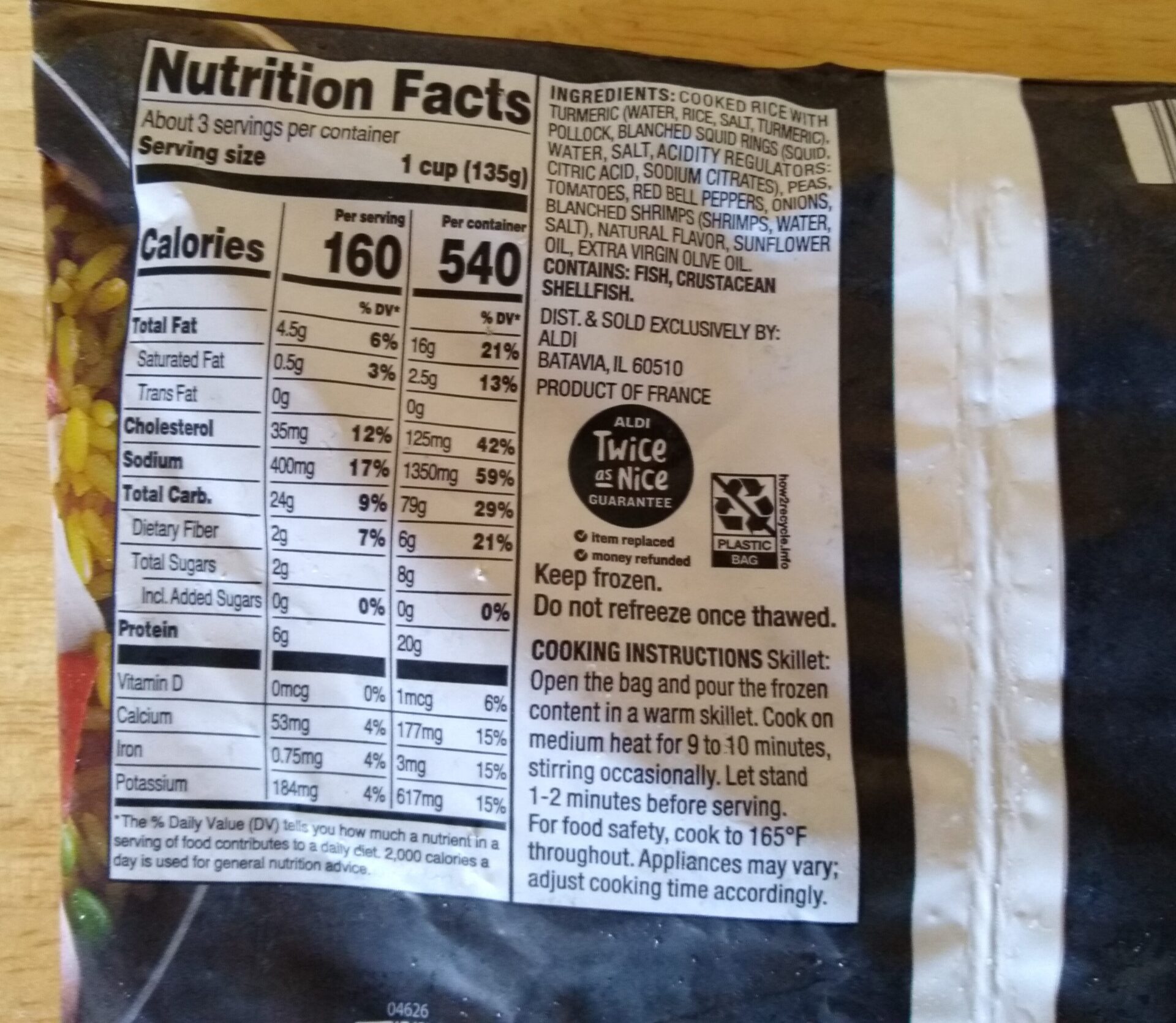 To prepare the paella, open the bag and pour the frozen contents into a warm skillet. Cook on medium heat for 9-10 minutes, stirring occasionally. Let stand 1-2 minutes before serving. For food safety, cook to 165 degrees throughout.

In a traditional paella, you are not supposed to stir the rice while cooking, in order for it to form a crusty, crispy bottom layer called a socarrat. I followed package directions and stirred, so I didn’t end up with the classic socarrat, but here’s a tutorial if you want to do it the proper way. Last fall, Aldi sold the Journey to Spain Paella Meal Kit that had instructions on how to make the socarrat. The Journey to Spain kit tasted fantastic, but it also was more processed with quite a few unrecognizable ingredients. In contrast, this Specially Selected Seafood Paella has more whole, easily identifiable ingredients. 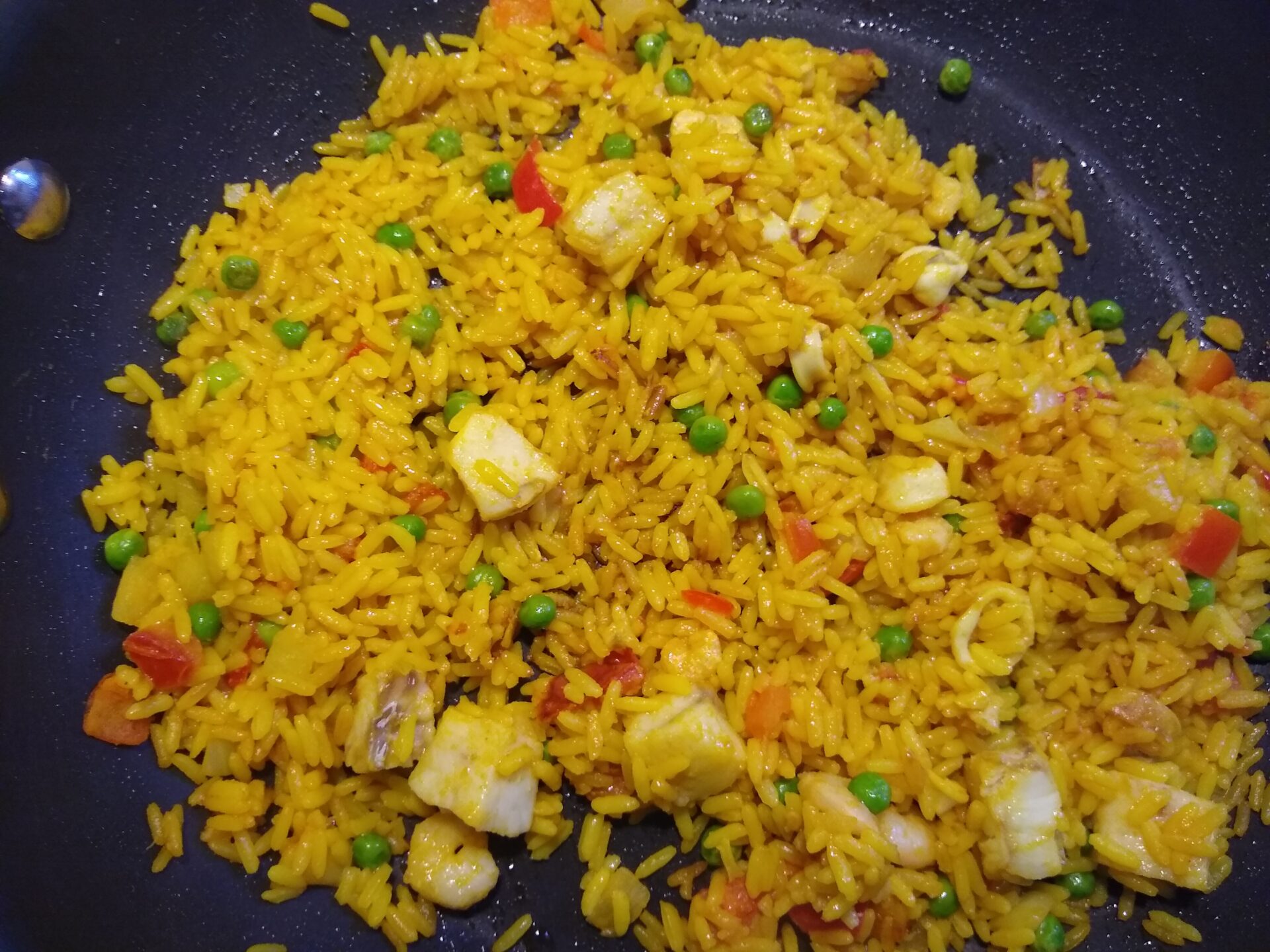 The cooked product. There is more seafood in there than it looks like. The pieces are just on the small side.

One package of this seafood paella does not make a lot of food, so if you’re feeding a family, you’ll want two bags or you’ll want to serve some other dishes and sides with it to make a complete meal. There is a decent amount of seafood in this mix, and it doesn’t taste fishy in a bad way. The pollock is cut into tidy little squares that are a good size, but the shrimp and calamari pieces are smaller than they appear in the photo on the package. You’ll also get a small serving of veggies with this meal, which includes some bell peppers and peas and few onions.

It’s not going to be as good as making paella from scratch, but overall this is not a bad option, and you can’t beat how easily it comes together, going from freezer to plate in about 10 minutes.

Aldi’s Specially Selected Seafood Paella is imported from France and contains rice, veggies, shrimp, pollock, and calamari. It’s good for a frozen meal, with mostly whole, healthier ingredients, and it cooks up quickly.