Celiac disease is a condition that causes an immune system response in the small intestine when the affected person eats gluten, a protein found in wheat, barley, and rye. Over time, this immune response can cause a host of complications. For those with celiac disease, the primary way of dealing with it is to eliminate gluten from the diet.

That’s not easy, as a lot of store-bought products contain gluten. Fortunately, there is a wealth of resources now to help people with celiac disease find and prepare gluten-free foods, and an increasing number of grocers have started stocking a limited number of gluten-free products.

Aldi has an entire line devoted to this idea under the liveGfree label. One such offering is a substitute for an American classic. 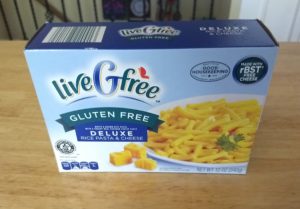 liveGfree Gluten Free Deluxe Rice Pasta and Cheese is an Aldi Regular Buy, which means it’s in stores all the time. Aldi also offers a liveGfree Deluxe Rice Shells and Cheese, which we did not test here, but we assume it is probably very similar to the pasta and cheese. Both the pasta and the shells cost $1.99 at the time of this post, and they come in 12-ounce boxes. That makes this a lot more than, say, Cheese Club Macaroni and Cheese or even Cheese Club Shells and Cheese, but given the fact that it’s gluten free, that might be more than worth the cost for someone who can’t digest gluten.

The box, by the way, notes that it is certified gluten-free by the National Foundation for Celiac Awareness.

The directions are similar to a standard mac and cheese. To cook, bring 6 cups of water to a boil, add the pasta, and cook for 10-12 minutes, stirring occasionally. (The box warns not to overcook.) Afterward, drain the water — don’t rinse the pasta — then return the pasta to the saucepan and add the cheese sauce, mixing well.

A couple of cooking observations. One, the cook time is slightly longer than traditional mac and cheese, owing probably to the fact that it’s rice based. Two, the water turns a little cloudy and the pasta tends to stick more than traditional pasta — again, probably owing to the fact that it’s rice based — so you’ll have to gently prod the pasta apart as it cooks.

One thing to keep in mind: just because it’s gluten free doesn’t mean it’s a health food. Like most macaroni and cheese, there’s a fair bit of fat and a lot of sodium, to say nothing of all the carbs. It’s probably best, then, as a food to eat in moderation. 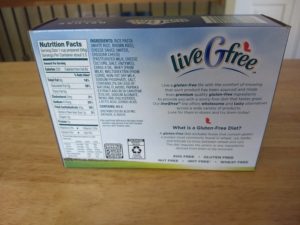 If you suffer from celiac disease and you’re looking for something that tastes close to traditional wheat-based macaroni and cheese, this is a pretty solid imitation. The texture and taste are similar, making for a quality mac and cheese experience. Just be aware that, like traditional mac and cheese, this also contains a fair amount of sodium, among other things. It’s also more expensive, although the trade-offs may be worth it if you just want to experience a traditional American food. Recommended.