Pizza is already a high-carb food, all due to that doughy crust. So it’s quite a daring thing to serve up something like Aldi’s Mama Cozzi’s Macaroni & Cheese Pizza with Bacon. It contains carbs in abundance in the form of crust and elbow noodles. Fortunately, Aldi caters to a variety of palates and diets, and if you prefer a lower-carb pizza, Aldi’s cauliflower crust pizza might be more of your thing. 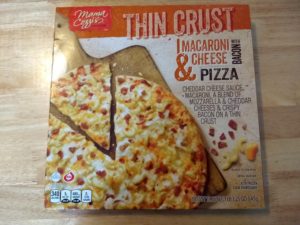 A 19.25-oz. pizza sold for $3.79 at the time of publication. Available as a limited-time ALDI Find (Special Buy), this mac and cheese pizza reminds me of novelty pizzas I’ve seen at buffets like Cicis Pizza. It’s also available in a plain cheese variety sans the bacon.

The box describes this pizza as “cheddar cheese sauce, macaroni, a blend of mozzarella & cheddar cheeses & crispy bacon on a thin crust.” 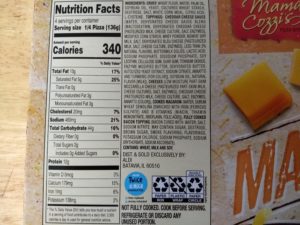 When you take this pizza out of the box, you’ll notice cooked elbow macaroni noodles are scattered on top of the cheese topping. Be careful not to let any noodles fall off the pizza during the unwrapping process and when placing it on a pizza pan. 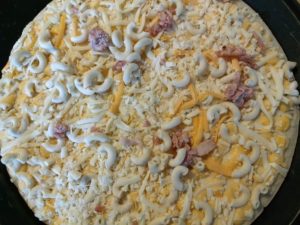 To prepare the pizza, preheat the oven to 400 degrees. Remove pizza from packaging and place directly on the center rack (I place my pizza on a pizza crisper pan). Bake for 15 to 18 minutes until cheese is melted and edges are golden brown. Allow to cool for 5 minutes before eating.

My pizza was done after about 15 minutes in my oven. The edges were nicely browned and the cheese was melty, and it smelled delicious. 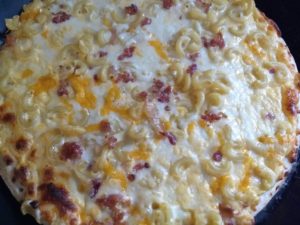 This pizza does not have traditional tomato-based sauce under all the toppings. Instead, it has a cheesy sauce that looks and tastes like the pouches of gooey cheese found in some boxed macaroni and cheese products. It tasted good, and the cheese factor is high because this sauce lies under a pile of shredded cheddar and mozzarella. It’s definitely not a health food.

I would have enjoyed more bacon on top of the pizza, and what bacon there was tended to be clumped together a bit. I broke up some of the clumps and spread them around a little before baking.

I also did not think this pizza was all that heavy on the macaroni noodles. It had just enough, but true mac and cheese fans might want to sprinkle some additional cooked noodles on top of this pizza.

The ALDI Find (Special Buy) Mama Cozzi’s Macaroni & Cheese Pizza with Bacon is a fun and utterly unhealthy novelty pizza similar to what you might find at some pizza buffet chain restaurants. It is generous with the cheese, although it could perhaps use more bacon and macaroni noodles. Just promise me you’ll eat a salad after indulging in this carb monster.