I bought a box of Aldi’s Millville Fiber Now 90 Calorie Lemon Bars on a whim one day. My 10-year-old, who loves all things lemon, scarfed the entire box in a matter of days. I thought the lemon bars were pretty good, too. Then several friends mentioned how much they like all the flavors in the Regular Buy Millville Fiber Now line. The next time I went to Aldi, I decided to try the rest of the flavors, which include Chocolate Fudge Bars and Cinnamon Coffee Cake Bars. Spoiler alert: they’re all good.

Millville’s Fiber Now 90 Calorie Bars offer 20% of your daily value of fiber in a .89-ounce bar. They come six to a box, and the bars are on the small side — smaller than many varieties of snack/granola bars. Yet at $1.69 for a box at my local Aldi stores, each bar costs less than 29 cents. The bars are pretty filling despite their small size, and the sugar content isn’t too bad, coming in at 7 to 8 grams per serving. My family wasn’t necessarily looking to up our fiber intake, but we’ve quickly gotten hooked on these bars because they all taste so good. They make a good grab-and-go breakfast or snack, and sometimes I tuck them in lunch boxes.

Let’s take a look at the various flavors: 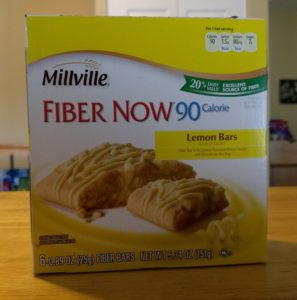 These were the first Fiber Now bars my family tried. They consist of a “fiber bar with lemon flavored pieces inside and drizzle on the top.” Those of us who like lemon-flavored foods enjoyed these bars, although I didn’t notice any of the promised lemon-flavored pieces inside. The whole bar itself simply has a lemon flavor, which tastes just right: not too strong and not too subtle. 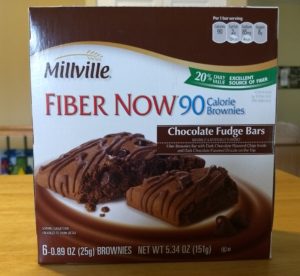 Next, my family tried the Chocolate Fudge Bars. They consist of a “fiber brownies bar with dark chocolate flavored chips inside and dark chocolate flavored drizzle on the top.” These are my favorite flavor. They taste like a soft, rich brownie, with little crunchy bits of chocolate mixed into the soft bar. If you like brownies, either homemade or of the Little Debbie variety, you’ll like these. 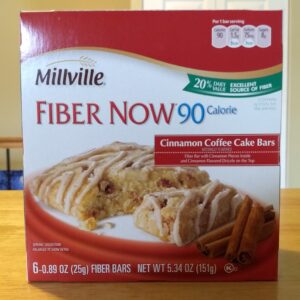 These consist of a “fiber bar with cinnamon pieces inside and cinnamon flavored drizzle on top.” I actually could see and taste the cinnamon pieces in this bar; they are little clumps of cinnamon, rather than cinnamon chips. It’s like a nice, soft piece of coffee cake, and it’s less crumbly than traditional coffee cake. My 10-year-old lemon-loving child even said she likes this flavor better than the lemon flavor, and that’s saying a lot.