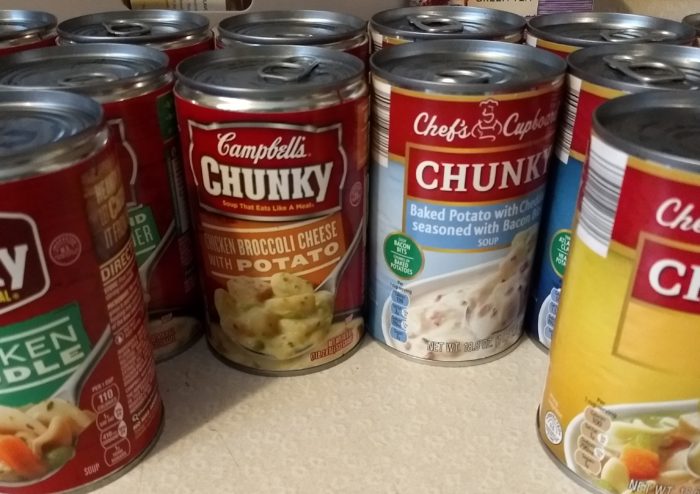 It’s a universal truth that our food tastes are connected to the weather. While the summer months are a time for cold food — ice cream, to be exact — the fall and winter months are when we pine for those hot “comfort foods.” In our view, nothing beats a quality homemade soup, but people don’t always have the time or resources to go that route, which is why canned soups are a big staple in any grocer.

Aldi, with its finger ever on the pulse of consumer demand, knows this well, because as the temperatures drop, the German grocer adds to its lineup of hot soups under the label of Chef’s Cupboard.

In keeping with the season, we decided to put Aldi soups — specifically, Chef’s Cupboard Chunky Soups — up against the name brand they are obviously meant to imitate — namely, Campbell’s Chunky Soups. (We didn’t do condensed soups or homestyle soups this time around.) To do this, we enlisted our crack team of professional foodies — specifically, two parents and their grade-school-aged daughters — to put each soup style to a side-by-side taste test. 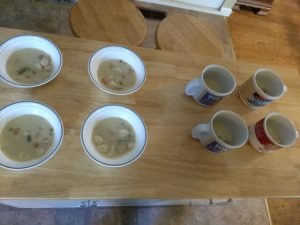 Chef’s Cupboard (left) vs. Campbell’s (right). This was the chicken and dumplings. (Click to enlarge.)

A few notes before we start.

One, the Campbell’s Chunky Soups retailed for $2.49 each the day we purchased them, although we got them on sale for $2.09. The Chef’s Cupboard soups, meanwhile, were $1.35 each, except for the Chicken Noodle, which was $1.49. While we picked winners irrespective of price, if Campbell’s won we did try to note whether we thought the taste difference was worth the price difference.

Two, it’s important to note that some of Aldi’s soups are Regular Buys while others are Seasonal Items (or Seasonal Favorites). Regular Buys are available year-round, while Seasonal Favorites are around for a few months out of the year (unlike Special Buys (ALDI Finds), which are only available for a week or so). We’ve tried to classify, based on our own information, which soups appear to be Regular Buys or Seasonal Items, but we could be wrong categorizing specific soups … so if you have reason to believe we are, shoot us an e-mail and we’ll update our post accordingly.

And finally, all of our scores are in Campbell’s-Chef’s Cupboard-tie format, with the winner listed next to the vote.

So, without further ado, let’s begin! 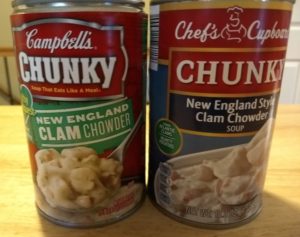 Taster Thoughts: This is probably not a fair comparison, as the only Campbell’s Chunky New England Clam Chowder we could find was the Healthy Request version, which has about half the sodium quantity of the Chef’s Cupboard. Still, it wasn’t even close. The four testers unanimously selected the Chef’s Cupboard, and not just for the lack of salt; even adding some salt, the taste of the Campbell’s broth — which was thicker than the Aldi broth — was just off. “It tastes like glue,” one of the children declared. Nutritionally, the Aldi soup is higher in calories, fat, and sodium. 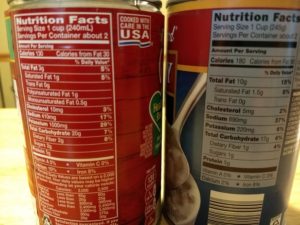 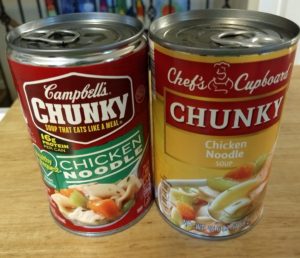 Taster Thoughts: As with the Clam Chowder, the Campbell’s version is a Healthy Request with about half the sodium. Once again, all four of our testers found the Aldi soup to be more flavorful, although the Campbell’s wasn’t bad, and with a little added salt or other seasoning tastes pretty good. (And if you’re looking to cut salt content the Campbell’s isn’t a bad option.) Also, the Chef’s Cupboard noodles are softer than the Campbell’s, which are more al dente. 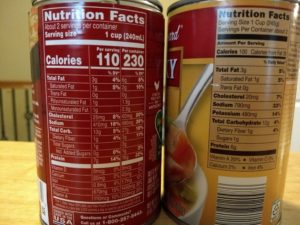 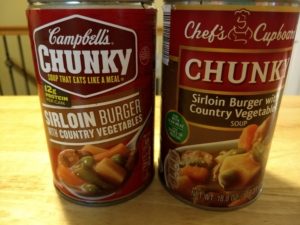 Taster Thoughts: Both soups look alike, with similar proportions of meat and vegetables. Three of our four voters preferred the taste of Campbell’s over the Chef’s Cupboard, although not enough that we were sure the cost difference was worth it. Both soups had decent flavors, but the majority found the flavors in the Campbell’s soup to be deeper and more complex, with a thicker broth, more flavorful beef, and sweeter carrots. There may be a good reason for this … namely, that the Campbell’s has monosodium glutamate (MSG), a controversial flavor enhancer. The Aldi soup does not, although it does have a higher calorie count (140 to 120) and fat count (5g to 3g) over the Campbell’s. One of our testers, by the way, strongly preferred the Aldi soup, primarily on vegetable taste. 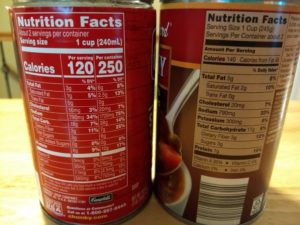 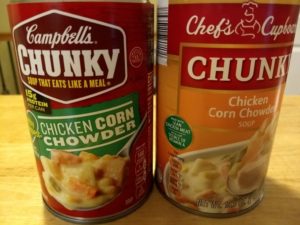 Taster Thoughts: Like the Clam Chowder and Chicken Noodle, the Campbell’s version of the corn chowder is a Healthy Request version. When it came to our testers, however, we were a house divided. The children of the family said they preferred the Campbell’s, both for the flavor and for the corn content. The adults, meanwhile, preferred the Aldi soup, citing the broth flavor in particular. (One of our adults said the Campbell’s was so bland they would never buy it again.) Nutritionally, the Aldi soup is much higher in calories, fat, and sodium. 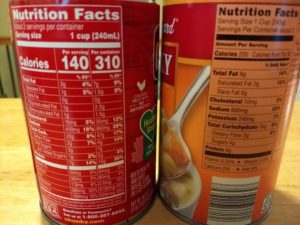 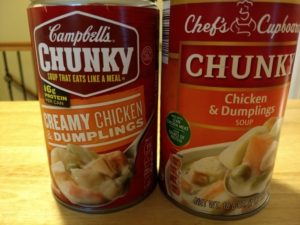 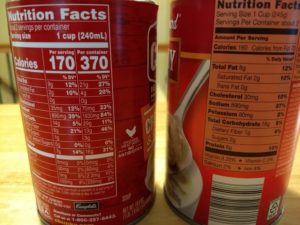 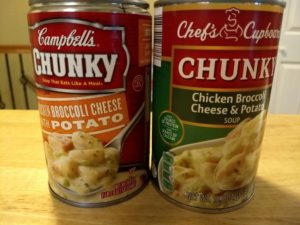 Chickens and broccolis and cheeses and potatoes. (Click to enlarge.)

Taster Thoughts: Like both the Campbell’s Sirloin Burger Soup and Campbell’s Chicken and Dumplings, the Campbell’s Chicken Broccoli has MSG. In this case, though, it didn’t matter — our tasters unanimously preferred the Chef’s Cupboard soup. The big difference-maker was the taste of the broth; the Aldi broth had a richer chicken flavor, while the Campbell’s, although a little thicker, was more plain. The Campbell’s did have a little more broccoli than the Chef’s Cupboard, but neither of them had much. Nutritionally, the soups were very similar, with identical calorie counts, fat totals, and sodium amounts. 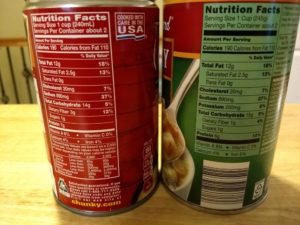 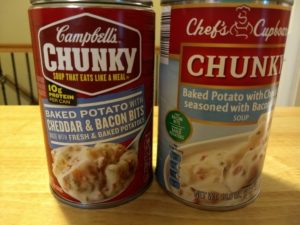 Taster Thoughts: This one was close. Two of our tasters thought Campbell’s was the winner, one thought Chef’s Cupboard was the winner, and one taster saw it as a tie. The Campbell’s, we thought, had an edge in the texture category — it’s creamier, and the potatoes are a little less slimy. The Chef’s Cupboard has a thinner broth, but two of our tasters thought it was superior in flavor, with a hint of smoke to it. Nutritionally, these two are just about identical, with the same calorie, fat, and sodium contents. 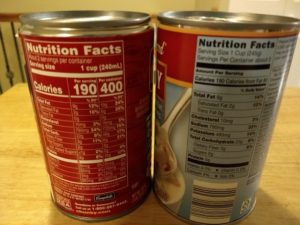 Comparing the Campbell’s and Chef’s Cupboard chunky soups turned out to be a lot more complicated than we anticipated. Some of the Campbell’s soups, for example, have MSG, while none of the Chef’s Cupboard soups do. On the other hand, some of Campbell’s soups are lower-sodium “Healthy Request” soups, while Aldi does not have any such chunky soups. (You can get lower-sodium Fit & Active branded soups from Aldi, but those are condensed soups, not chunky or homestyle.)

In fact, only one soup set we tested fit a true apples-to-apples comparison — where the nutrition was similar and MSG wasn’t a factor — was the loaded baked potato, which was very close, with a slight edge to Campbell’s soups.

Nevertheless, we did draw a few takeaways. One, most of the Campbell’s Healthy Request soups were inferior enough to the regular Aldi soups that we weren’t sure they were worth it. (An exception is Campbell’s Chicken Noodle, which is still not as good but .) Two, the addition of MSG to some’s Campbell’s soups was hit-or-miss as to whether it made the soup superior. Three, we found that, overall, while some Aldi soups were much better than Campbell’s, at no time did we find any Campbell’s soup to be better than the Aldi soup by a wide margin.

Finally, we found that, given the cost difference, that the Aldi Chef’s Cupboard soups are cheaper enough than the Campbell’s to be worth a hard look … although, as we said at the beginning, none of them were better than a true homemade soup.