Skip to content
Home Features Millville in the MCU: How Aldi Products are Showing Up in TV and Film

Millville in the MCU: How Aldi Products are Showing Up in TV and Film

Not long ago, fellow Aldi Reviewer contributor Elizabeth messaged me about something most unexpected that she’d caught during a recent movie session. She and her sons had sat down to watch the two recent films in the Venom series, Venom (2018) and Venom: Let There Be Carnage (2021). Like Spider-Man, Venom films are Marvel properties distributed by Sony … and, based on various post-credit scenes, are presumably part of the Marvel Cinematic Universe (MCU).

In any event, at around the 21-minute mark of the first Venom film, Elizabeth spotted this: 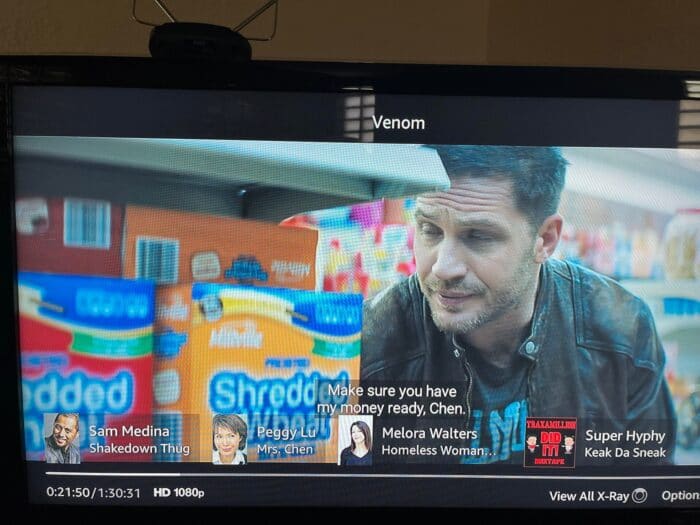 Protagonist Eddie Brock (played by actor Tom Hardy) is in a convenience store when the store’s owner, Mrs. Chen, is robbed by a thug. The scene itself ends up being significant much later on in the movie, but for our purposes, the important part is what Brock leans next to when he’s hiding from the robber. With Mrs. Chen being held at gunpoint and paying out to the robber, Brock finds himself hunched beside a couple of boxes of Millville Shredded Wheat. What’s more, in the seconds leading up to that moment, the camera pans by a shelf that appears to have more Aldi products, including, possibly, two kinds of Aldi peanut butter.

Is this deliberate product placement by Aldi, or the movie simply using these items as props? We don’t know. The store in the movie is not Aldi, but a simple mom-and-pop shop in San Francisco. What’s more, one of the products above the Millville cereal is Sunbelt Bakery, which is not an Aldi product. Because the focus of the scene is not on Aldi, only an eagle-eyed Aldi fan would be likely to notice.

As it turns out, Venom isn’t the only fictional place Aldi products have appeared. The German supermarket’s cereals have also made cameo appearances in a few different TV series, particularly in recent years. Millville products, for example, popped up in several episodes during the 11th season of Showtime’s Shameless, a show with a wide history of product placement. Aldi cereal also had a brief moment during one 2022 episode of NBC’s Chicago Fire, when Millville Corn Flakes showed up at a convenience store. As was the case with Venom, the Chicago Fire store was not an Aldi.

Does that mean we’re likely to see more Aldi products showing up in future movies and television shows? Hard to say. But the appearance of Millville cereals in fictional stores and around TV tables certainly has our attention.

Just as importantly, it would appear that Aldi products are officially canon within more than a few fictional universes, including the MCU. Whether Aldi stores will join them … well, we’ll have to wait and see.

Have you ever seen Aldi or Aldi products in TV or film? Let us know in the comments.