Depending on where you live, June heralds the onset of true heat. As I type this, my part of the United States is experiencing several straight days of around 90 degrees, the kind of temperature that usually has people thinking swimming pools and water rides.

Going to a water park is a great way to cope with the heat, but sometimes circumstances makes it hard to get out. In those cases, there are a few ways to bring some of that water park experience to you: kid pools or water slides, for instance. 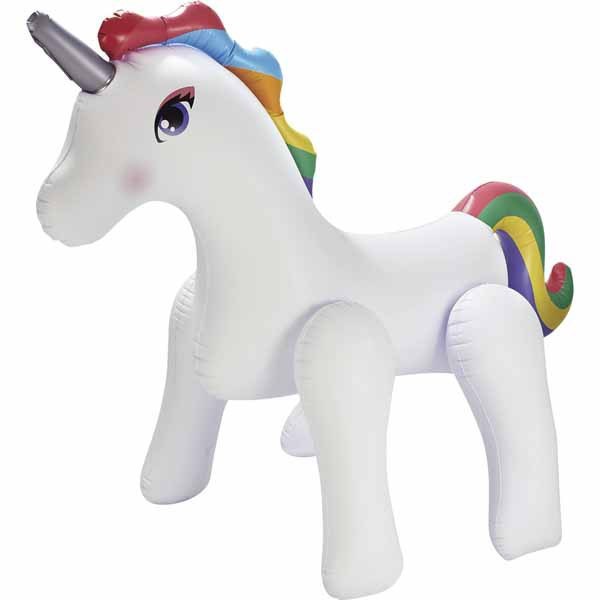 Summer Waves is a brand owned by Polygroup Holdings Limited, a Hong Kong-based multinational manufacturer of artificial Christmas trees, Christmas lights, inflatables, and pools. Summer Waves is probably the most familiar name in the Polygroup portfolio: the brand can be found just about everywhere, from big box stores to dollar stores to, occasionally, German grocers.

While Summer Waves products are sold in many places, I could not find any other outlets that sell this exact sprinkler. Target sells a Sun Squad Unicorn Sprinkler and Amazon sells a lot of unicorn sprinklers, but none of them are identical to the Aldi ones. I don’t know to what degree the Summer Waves Unicorn and Dino sprinklers are Aldi exclusives; it’s probably enough to say that they’re not in many other stores. Aldi’s price on this giant sprinkler is as low or lower than most other sprinklers of its type.

The Summer Waves sprinklers have the following features:

The sprinklers come with a repair patch. What they don’t come with is a warranty. If you break it, or if it tears through use, you won’t have many options. That’s an important consideration for a product that costs $40. 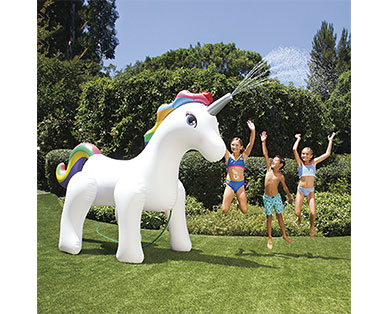 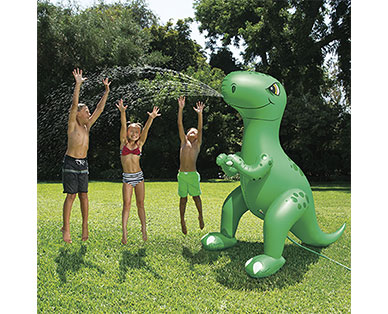 We fully planned on reviewing one of these ourselves … but we couldn’t find one. Our stores were completely sold out the morning the ad took effect. It appears that some stores put them out early, and shoppers gobbled them up right away. Because of that, we don’t know how well it sets up, or how well it works, or how it lasts.

Did you manage to get one of these? We’d love to know about your experiences in the comments.