Whenever I attend a family reunion or church potluck, I can count on certain things to be there. Rolls. Salad. Meats. A Crock Pot. (Or four.) Lemonade. Too many calories.

And potato salad, maybe homemade, but probably bought in a plastic container from the local mid-tier grocery store.

And deviled eggs, most likely homemade, with a sprinkle of paprika on top for good measure. 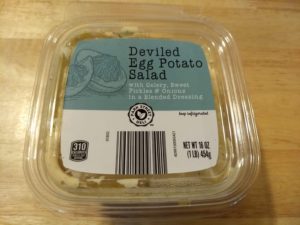 Park Street Deli Deviled Egg Potato Salad is a Seasonal Favorite, which means it’s around for longer than an ALDI Find, but not forever. It comes in that classic clear plastic snap-top tub that most potato salads come in. At the time we purchased it, the potato salad came in a 16-ounce container and retailed for $2.29. 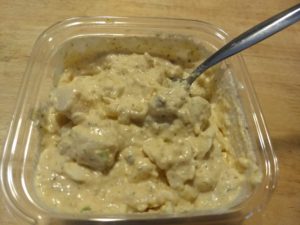 We thought it was a decent potato salad, although not great. The texture was okay if maybe a little high on the sauce-to-potato-and-egg ratio. The taste was flavorful enough, but we felt like it tasted closer to a regular potato salad with a little bit of deviled egg rather than a full-on deviled egg potato salad.

Nutritionally, it’s a potato salad, so expect it to be high in fat, sodium, and cholesterol, and it also contains soy and, not surprisingly, eggs. It does have a modest amount of vitamins and minerals, but this isn’t a health food. 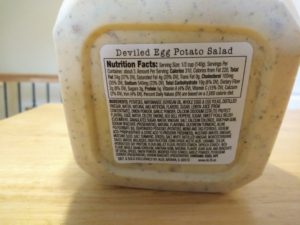 The Park Street Deli Deviled Egg Potato Salad is a decent — if not terribly inspired — option for a side item. As potato salads go it’s okay, but the deviled egg portion of the taste isn’t as pronounced as we would have hoped. If a full deviled egg experience is what you’re after, you might be better off looking at other brands … or, better still, making your own.