Potato salad is the quintessential American side item. Starting with the potato — a crop that originated in the Americas — potato salad adds a dressing and other ingredients to give it a rich, creamy flavor. It’s a staple at family picnics and church potlucks, often set next to some helping of meat.

There are many ways to make potato salad, including a range of homemade recipes, but for many people the convenience of getting it from the grocer (and not having to peel all those potatoes yourself) is well worth the extra cost. To that end, Aldi sells a couple of different potato salads as Seasonal Favorites, which are Aldi items that show up for specific seasons — in other words, longer than an ALDI Find. A Seasonal Favorite does get restocked, but not forever, so after a certain time it will fade away from stores until the next time it shows up.

One of the Seasonal Favorite potato salads is the Park Street Deli Deviled Egg Potato Salad. This potato salad is another. 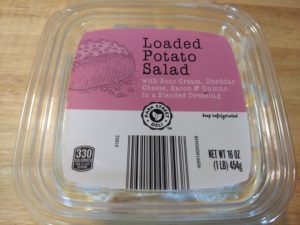 Park Street Deli Loaded Potato Salad comes in a 16-ounce plastic tub and retails for $2.29. It has the familiar snap-top lid that you often see on cold sides like this. 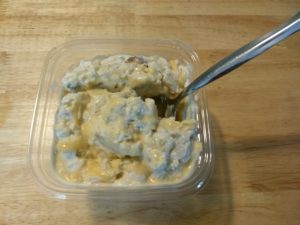 Overall, we liked this salad. It has decent flavor, including a nice cheese base, and the potatoes themselves are large. Our family seemed to prefer the Aldi deviled egg potato salad over this one, but this is perfectly competent.

Nutritionally, this is, like most potato salads, high in calories, sodium, and fat, so moderation is the best route here. 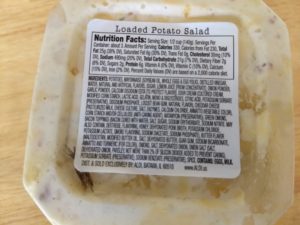 Park Street Deli Loaded Potato Salad is a decent variation on the time-tested potato salad theme. It has a nice lineup of ingredients and big potatoes to boot. Our family generally preferred its cousin, the Park Street Deli Deviled Egg Potato Salad, but this is a perfectly serviceable side in its own right, too.