EDITOR’S NOTE: These showed up at Aldi in 2019 and appeared to be Regular Buys that would be available year round. Then Aldi never restocked them. We don’t know if or when they will reappear.

When you think of quick, processed, disposable kid’s lunches, you probably think of Lunchables. They’re iconic little packages, with their cover film and their little cheese and cracker slices, to say nothing of the dessert (and, depending on the Lunchable, the Capri Sun) that goes with them.

Aldi sells Lunchables imitations of its own. One is the Never Any! Lunch Kits, which boast preservative-free meats, but if you’re looking for a more conventional experience, Aldi also sells a run-of-the-mill Lunchable knockoff. 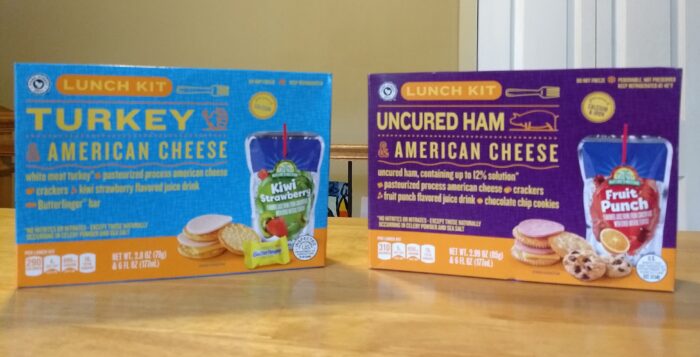 Park Street Deli Lunch Kits first appeared in stores as a Regular Buy, although Aldi subsequently removed them, so we’re not sure what the future holds. 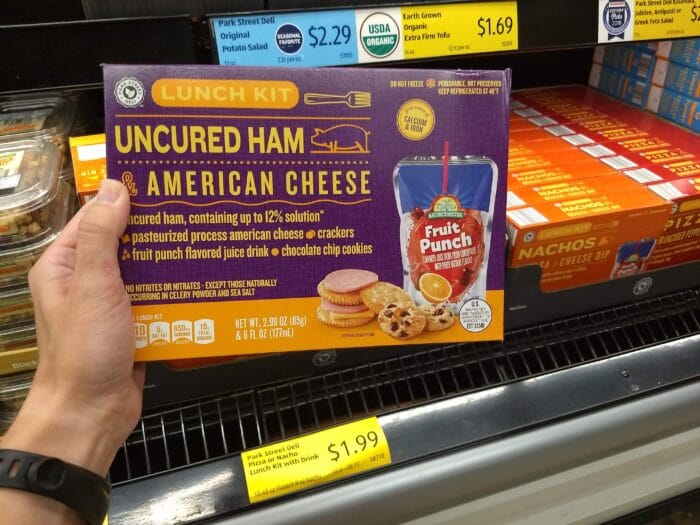 We thought these were here to stay. Apparently not.

They cost $1.99, which is around 40-80 cents less than what we pay for a Lunchable with a Capri Sun. (Fun fact: while a Lunchable without a drink is usually 3.2 ounces, the ones with a Capri Sun are 2.8 ounces of food … the same as the Park Street kit.) They are meant to be kept refrigerated — and can’t be frozen — so you’ll want to plan accordingly if you’re sending them off to school.

The lunch kits come in at least two varieties: Turkey and American Cheese and Uncured Ham and American Cheese. We also spotted a Pizza version and a Nacho version, although we did not test those, and when we returned to our stores later we couldn’t find those versions.

The box and plastic tray are recyclable. The film over the tray is not.

The meats in both boxes are, interestingly, preservative-free, meaning no added nitrates or nitrites.

The packages are relatively easy to open: you simply pull back the plastic film and eat what’s inside. The crackers, cheese, and meats are all there, and they’re relatively easy to get at. (The cheese perhaps takes a bit more effort to separate than Lunchables cheese, but it’s a small nit.) The quantities are such that you get an equal number of cheese, crackers, and meats, so you can either create stacks of the three or double them up into larger “sandwiches.”

It all tastes pretty good, and mostly like its brand-name counterparts. The crackers, cheeses, and meats all taste about right, and the fruit drinks are good imitations of Capri Sun. The cookies weren’t quite as tasty as I’d hoped, but they were adequate, and the Butterfinger in the turkey kit was its typical brilliant self. The portions aren’t large — not a surprise — but there are a decent number of calories in the kit, in no small part because of the fruit drinks. That makes these about right in terms of size for a kid meal.

The big debate with these kits will probably center around their processed nature. I’m not going to get into that issue too deeply, since most people reading this will probably know the ins and outs of that. In an ideal world, most people probably would say that homemade meals are best, but in reality sometimes parents need something quick, and these fit it. You can check out the nutrition for yourself. 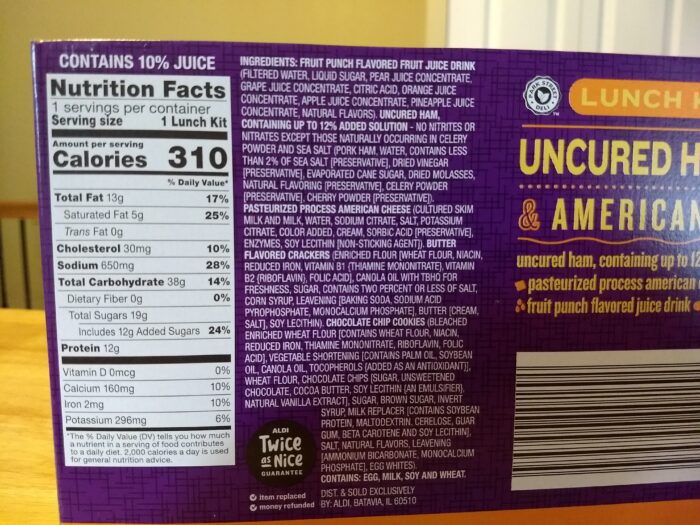 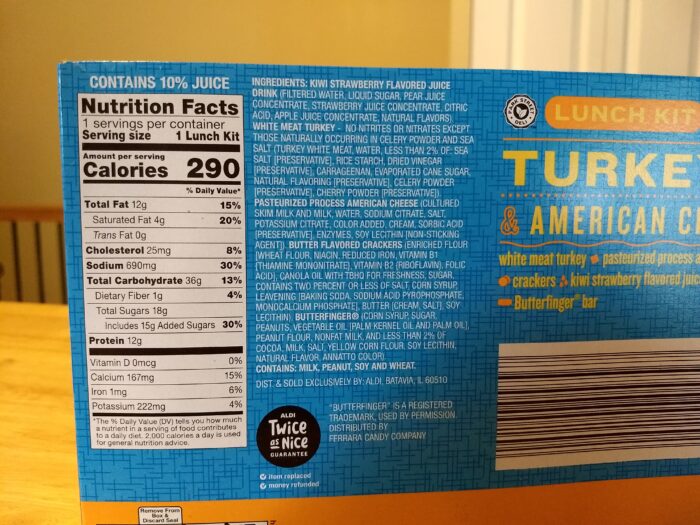 If you’re in the market for a Lunchable clone, these are exactly what Aldi likes to deliver: an imitation that does good on its promise to mimic the brand name. For less money, Park Street Lunch Kits do more or less what a Lunchable does. If you’re a parent who needs a meal in a hurry, this is an option.

* I should have kept better track of the count when I was eating them. I want to say 5-6 slices each of cheese, crackers, and meat.