My kids enjoy eating Lunchables when we travel. Aldi sells name-brand Lunchables, but it also sells its own version of the pre-packaged, ready-to-eat lunches. Aldi’s Never Any! Lunch Kits come in two varieties: uncured ham and cheese, and smoked turkey and cheese. 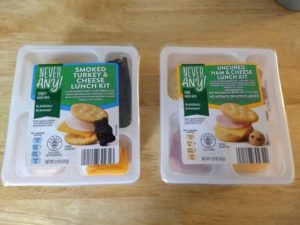 Both kits are products of Canada and contain fully cooked lunch meat, crackers, cheese, and a small dessert.

The kits cost $1.99 for a 2.9-oz. package at the time of publication, and the packaging states the meat was raised with no antibiotics and no hormones.

Sometimes I can get name-brand Lunchables or the similar Armour Lunchmakers kits on sale for $1 at my local regular grocery chains, so these are not necessarily a deal compared to other kits out there. However, Aldi’s Never Any! brand might be worth paying a little more for because the meat doesn’t have antibiotics. The Never Any! line is known for not having additives or other ingredients health-conscious customers don’t want.

The Washington Post states there are no antibiotics in any of the meat we eat, regardless of labeling, because “antibiotic residues in meat products are already regulated, and farmers who use antibiotics in their herds or flocks of animals need to conform to strict dosing schedules, including withdrawals of antibiotics at certain time points before the animals go off to slaughter. As such, you shouldn’t expect to consume antibiotic drugs in any meat product.”

So while you won’t ingest any antibiotics or antibiotic residue by eating ordinary grocery-store meat because enough time has passed that the antibiotics have worked their way out of the animal’s system, the reason it’s worth buying meat labeled “raised without antibiotics” has to do with how routine administration of antibiotics encourages the development of antibiotic-resistant “superbugs” or bacteria that evolve so that antibiotics are no longer effective.

When a food label states that an animal has been “raised without antibiotics,” that animal has not received any antibiotics in its lifetime, not as a preventative measure and not to treat any illness. (If an animal does receive antibiotics for an illness, it is supposed to be marked and can no longer be sold as “antibiotic free.”)

Moving on, Aldi’s Never Any! Lunch Kits also state the animals used in the products are raised with no hormones. In small print below that statement, the packaging adds that “federal regulations prohibit the use of artificial stimulants or growth hormones” in poultry and pork. Growth hormones are often used with cattle raised for beef, but not with chicken or pork. Customers may mistakenly believe they’re getting a healthier product when producers label chicken or pork “hormone free.”

With all that said, let’s look at the individual kits:

It contains milk, soy, and wheat, and it may contain coconut and eggs.

My daughter liked this kit and thought it tasted like name-brand Lunchables. She also enjoyed the chocolate bear cookies that are a bit like chocolate Teddy Grahams.

It contains 270 calories, 6 grams of saturated fat (30% DV), 540 mg of sodium (22% DV), and 6 grams of sugars. The package also states the ham has no nitrate or nitrite added except for naturally occurring nitrites in sea salt and cultured celery extract.

It contains milk, soy, and wheat, and it may contain coconut and eggs.

My husband ate this lunch kit and thought it was indistinguishable from name brands. He thought it was easy to open the packaging. The cheese and meat all peeled apart easily, while both my husband and daughter said they sometimes have trouble peeling cheese slices apart with name brands.

Aldi’s Regular Buy Never Any! Lunch Kits come in ham and turkey varieties and include meat, cheese, crackers, and a dessert. My family thought they were identical in taste to name brands such as Lunchables or Armour lunch kits. The price is okay but not as competitive, but the meat in these kits comes from animals raised without antibiotics, and that may be worth it.