EDITOR’S NOTE: A few years ago, Aldi removed its detailed recipe from this lasagna noodle box. We have shared the old recipe in this post, and it should work with current boxes of Aldi oven-ready lasagna. In addition, we tested the directions on the current box using our own family recipe and wrote about the results here.

We keep a running list of items we wish Aldi stocked and sold, and lasagna noodles are on that list. While Aldi sells a variety of noodles — spaghetti, fettucini, rotini, and penne — lasagna noodles have previously not been available. Then, the other week, I noticed Reggano Oven Ready Lasagna noodles on an end cap near the checkout lane. Aldi for the win! 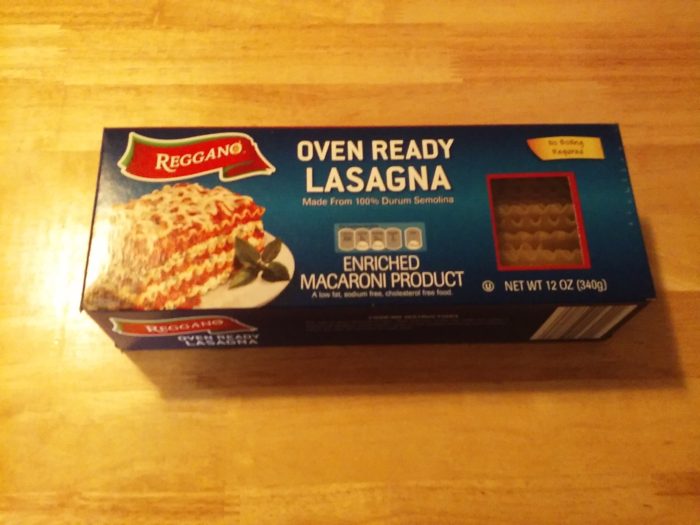 The box has simple cooking instructions: Use in your favorite recipe. Add 1/2 cup of water (or milk) for every 5 pieces of lasagna used. Cover with tin foil before cooking and remove cover for the last 10 minutes of cook time.

Or if you want an even easier option, there is a recipe on the back of the box. It. Is. Delicious. Like make-it-for-company delicious. 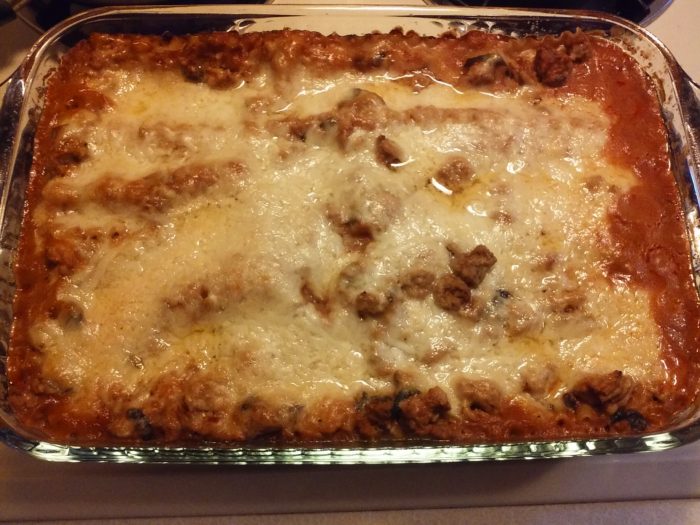 Preheat oven to 375 degrees. Combine cheeses in a bowl and set aside.

In a large skillet, heat olive oil over medium heat. Stir in the garlic and onion and cook until softened. Add ground turkey, sprinkle with salt and pepper, and cook 5 minutes or until cooked thoroughly, stirring to crumble. Add the mushrooms and cook 2 more minutes.

Spray a 9×13 baking pan with non-stick cooking spray; spread 2 tablespoons each of marinara sauce and Alfredo sauce across the pan. Add the remaining marinara and Alfredo, along with the spinach, to the turkey mixture and cook until heated through and spinach is wilted. Remove from heat.

Layer 3 or 4 lasagna noodles (Again, the ingredients list and the recipe directions call for different numbers of noodles here; I went with the higher number because I like noodles a lot!) over the sauce in the baking pan. Top with 1/3 of the meat mixture and 1/2 cup of the cheese mixture. Repeat layers 2 more times. Spread the remaining cheese mixture on top.

Cover the pan with foil and bake for 40 minutes. Uncover and bake 10 more minutes, until cheese is bubbly and golden brown. Let stand 10 minutes before serving.

My family loved this lasagna dish. The combination of marinara and Alfredo sauces was tasty, and it reminded me of an Italian restaurant near my home that serves some pasta entrees with that combination of sauces and calls it “coral sauce.” It makes a nice creamy Alfredo sauce.

I appreciate that this recipe calls for fresh mushrooms instead of (slimy) canned ones, and it uses fresh spinach instead of (also slimy) frozen spinach.

I also like how versatile this recipe is. If you have picky eaters who don’t like mushrooms or spinach, you can easily omit those ingredients or reduce the amount you use. I used half of the mushrooms and one third of the spinach the recipe called for. The spinach blended so well with the rest of the lasagna that my family hardly noticed it, so when I make this again I’ll add one more handful of spinach. You also could use diced bell peppers in place of or in addition to the mushrooms and spinach.

When you prepare this meal, be sure to use a large skillet when making the meat sauce mixture. By the time I finished adding all ingredients, it was nearly at the top edge of my skillet … and that was after I reduced the amount of mushrooms and spinach in my version.

The recipe has its quirks, such as some confusion over whether to use 9 or 12 noodles (I went with 12), and the fact that it calls for a 26-oz. jar of marinara sauce when Aldi only sells 24- or 25-oz. jars (I used a 25-oz. jar of sauce and it worked well). Regardless, the end result is perfection.

If you like lasagna and Italian food, you’ll like Aldi’s Oven Ready Lasagna noodles. That’s only half the story, though. The lasagna recipe on the back of the noodle box is a keeper. It’s so good you’ll want to make it for company and take it to friends who are sick or who have just had babies. It’s that good! Highly recommended.