For years, I’ve purchased Aldi’s refrigerated Bake House Creations Pie Crust whenever I wanted to make a pie, but I couldn’t find it the week before Thanksgiving at my local Aldi. Instead, I discovered another pie crust Aldi carries in the freezer section: the Belmont Deep Dish Pie Crusts. 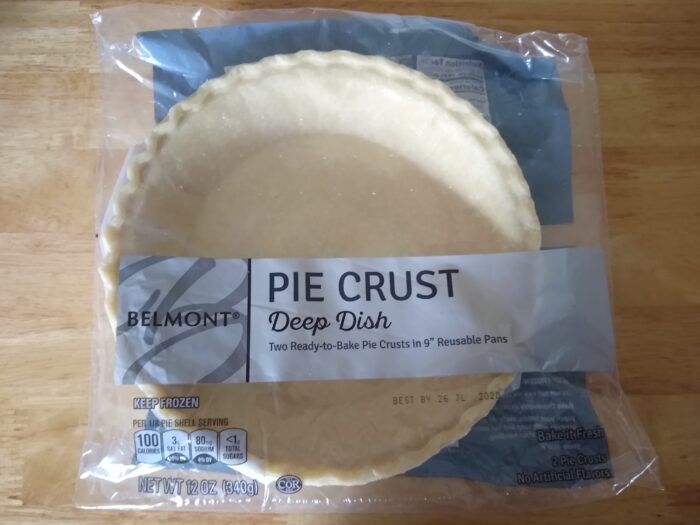 While my old Bake House Creations crusts were rolled up inside the package and had to be spread out to make a pie, the Belmont crusts come already placed in foil pans, ready to fill with pie ingredients of your choice.

Belmont Deep Dish Pie Crusts cost $1.49 at the time of publication for a 12-oz. package that contains two ready-to-bake crusts in 9-inch reusable pans. This is a Seasonal Favorite product, which means it’s in stores longer than an ALDI Find, but it’s not in stores year round.

The crusts are certified kosher and are a product of Canada. The main ingredient is wheat flour, and those with allergies should be aware they contain wheat. 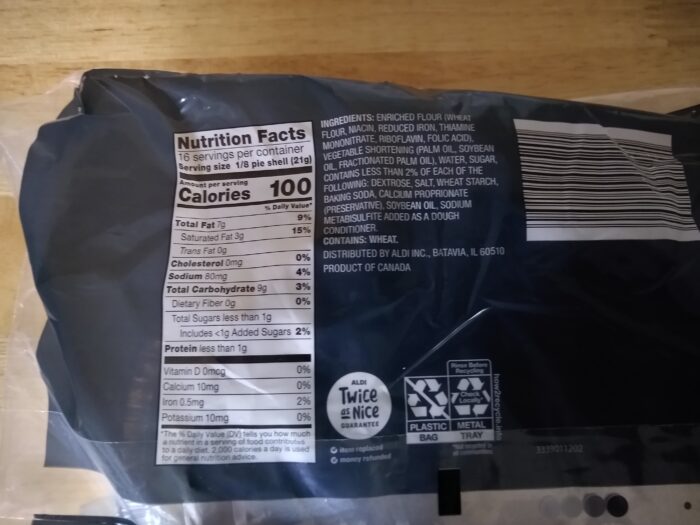 The crusts should be kept frozen, and the instructions state to remove parchment paper from the crusts before filling or baking. For easy mending of cracked pie crust, thaw it slightly, moisten the edges with water, and press together.

The package has directions for baked pie crust, one-crust pies, and two-crust pies.

To make a baked pie crust (for cream, pudding, lemon meringue, or chiffon pies), remove shells from freezer and allow to thaw for 10-20 minutes. Prick bottom and sides of pastry to the pan with a table fork to prevent puffing during baking. Place on cookie sheet on the middle rack of a preheated oven at 400 degrees. Bake until golden brown (approximately 11-14 minutes). Cool and fill as directed in your recipe.

To make a two-crust pie (for fruit or mince pies), remove crusts from package and pour filling into bottom crust. While second crust is still in the pan and frozen, remove crimp with a sharp knife. Remove the crust from the pan and center the frozen crust upside down on top of the filled pie. Let thaw 10-20 minutes, then crimp edges together. Cut 2 to 3 slits in the top crust. Bake on a cookie sheet as directed in your recipe. 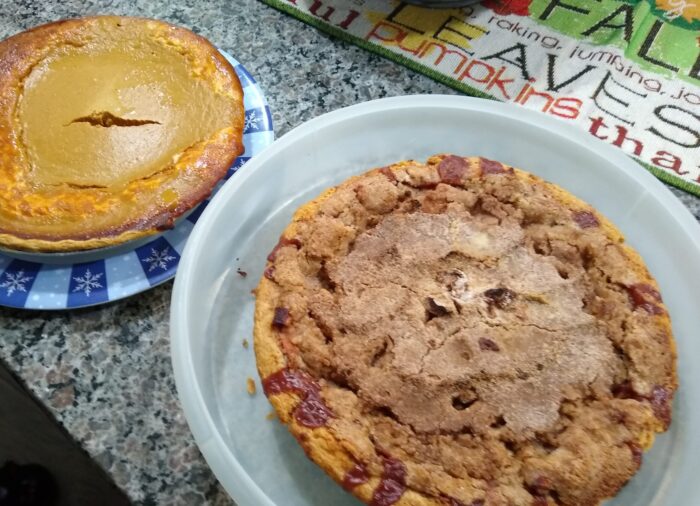 I made an apple crumb pie and a pumpkin cheesecake pie with the two crusts that came in the package. Both pies did not require a top crust, so I can’t speak to how a top crust would bake up and taste, and it seems like these crusts are better suited to single-crust pies anyway because they come already in foil pans and you have to deconstruct one of them to make a top crust. As for the pies I made, they tasted like typical pie crusts and made a good base for the desserts I made.

One potential criticism is that these crusts are advertised as deep dish and measure 1.5 inches deep. A deep dish pie is considered to be 1.5 to 2 inches deep, so these are on the shallower side for deep dish pies. My pumpkin cheesecake pie recipe called for a deep dish crust, but the filling did not all fit in the Aldi crust, so I ended up pouring the extra filling into ramekins and making some mini custards. The pie itself still tasted fine without that extra filling, but it’s good to be aware that the crusts may not be as deep as your recipe calls for.

Overall, these crusts are as good as any other store-bought crust I’ve tasted, and my pies were a hit at a family Thanksgiving gathering, so I’ll probably purchase these again.

Aldi’s Belmont Deep Dish Pie Crusts taste like most store-bought ready-made crusts and are perfectly fine for most dessert recipes. They measure 1.5 inches deep, which qualifies as deep dish, but some deep dish pie recipes call for a 2-inch-deep crust, so keep that in mind with any recipes you use.