When I was a kid, my parents had a wok, which we would use to make stir fry. I sometimes was put in charge of cooking said stir fry, and I quickly discovered there were certain components of the meal that I liked more than others. Baby corn, for example, was okay, but it wasn’t my favorite. On the other hand, the beef was.

As was broccoli. Among the green vegetables, broccoli has always been — and still is — one of my favorites. I like broccoli with cheese, but I also like steamed broccoli with a bit of salt. And, of course, I like stir fry broccoli.

So when Aldi recently sold a stir fry broccoli, I was interested. That interest evaporated with the first bite. 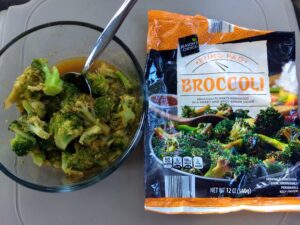 Season’s Choice Kung Pao Broccoli is an ALDI Find (Special Buy), which means it’s only available in stores for a short time. When it is in stores, it can be found in the ALDI Finds frozen section. Aldi also sold Season’s Choice Steakhouse Green Beans alongside the broccoli, but we did not try those.

Cooking the broccoli is simple, although it requires a microwave. You place the bag — unpunctured and unopened — in the microwave and cook on high for 4-5 minutes. As is the case with most steam bags like this one, the bag will slowly inflate during cooking. When the time is up, you let it stand for one minute before carefully cutting open the bag, watching out for steam. Finally, you pour everything into a bowl and mix thoroughly.

We did all of that and served it as a side dish with a Chinese-themed dinner in the way we typically do around our house: without any rice or other doctoring.

Our three testers quickly reached a unanimous conclusion: it was terrible. The texture of the broccoli was fine and was on par with other steamed bags I’ve had, but the taste was a complete failure. The bag advertises “broccoli florets marinated in a sweet and spicy ginger sauce,” but there was no sweetness or ginger flavor to be found, nor would we exactly call it spicy. Instead, it tasted like bland broccoli laced with enough pepper to send me straight to my water glass. It wasn’t a heat so much as a pepper kick. Even the tester in our group who loves spicy food quit after one bite.

What’s incredible is that this kung pao broccoli manages to achieve this lack of taste despite having a load of ingredients, including, allegedly, kung pao sauce. In addition, this product contains both soy and wheat. 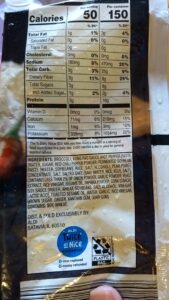 We’ve had kung pao sauce before and this product bears no resemblance to anything with that name that we’ve had. Instead, this broccoli is a bland, peppery disappointment. None of our testers made it past a single bite. Consider us highly disappointed.