When I was a kid, lowfat milk was all the rage. At school, it was 2%; at home, it was skim. The belief at the time was that lowfat milk was better for you, since it had less fat.

In recent years, science has started to come around on whole milk, which I think is fabulous, as whole milk 1) tastes better and 2) is more filling. I think the taste difference is certainly true of whole white milk, but I think it’s especially true of chocolate milk, which to me just doesn’t quite have it in a lowfat form. Unfortunately, our local Aldi doesn’t typically carry chocolate whole milk, so when it does, I tend to get excited. 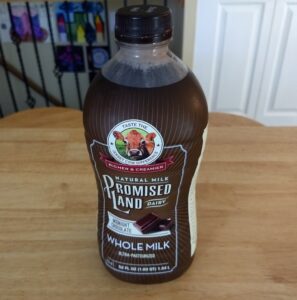 Promised Land Dairy Midnight Chocolate Whole Milk is an ALDI Find, which means it’s only in stores for a limited time. It’s $3.79 for a 52-ounce bottle, which comes out to 7.2 cents an ounce. That’s a lot more per ounce than Aldi’s 1% chocolate milk, and it is also a lot more than the whole chocolate milk available at our local larger grocers. On the other hand, Aldi’s price on Promised Land Dairy is less than the same milk at other stores.

Promised Land Dairy, as best as I can tell, is a company based out of San Antonio, Texas. Promised Land is a subsidiary of Grupo Lala, the only nationwide dairy company in Mexico. Lala purchased Promised Land in 2009 as part of a large expansion into U.S. markets. Promised Land Milk is not an Aldi exclusive, and the company sells a number of other flavors at other stores.

Promised Land claims to produce its milk on “family farms” using only local Jersey cows, but after searching online I can’t figure out where those farms are, and the company’s website doesn’t offer any insight, other than to point out that they no longer offer tours. When I searched for a location for the dairy, the only address I could find was an office complex in suburban San Antonio. (The bottle claims it’s manufactured for a Promised Land Dairy in Floresville, Texas, but that site is listed by Google Maps as closed.) In theory, I could use a code on the bottle to figure out where your milk comes from — and in doing so I think the milk was processed at Sinton Dairy in Colorado, although I’m not entirely positive on that point.

The milk is ultra-pasteurized, which according to Cornell University involves heating it hotter for a shorter period of time, which Cornell claims kills more bacteria and gives milk a longer shelf life. In terms of ingredients, the milk contains cocoa, salt, guar gum and carrageenan, a controversial additive used to thicken the milk.

Also, because it’s chocolate milk, it’s got a lot of sugar. 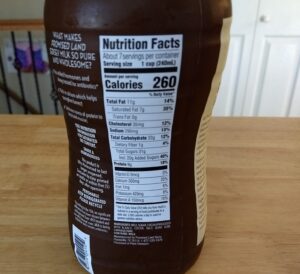 What about the taste?

It’s really good. It’s thick, it’s creamy, and it’s got a whole-bodied chocolate flavor that is just shy of a milkshake. It’s incredibly tasty without being too sweet. And because it’s filling, it’s also something that you’re not as likely to overindulge in.

Strictly on the merits of taste, Promised Land Dairy Midnight Chocolate Whole Milk is a knockout. It has a rich, creamy taste and is about as close to dessert in a cup as you’ll find without being overly rich. On the other hand, I’m not sure what to make about the sourcing of this milk, especially since Promised Land Dairy appears to be part of a large corporate milk empire, and it’s not clear where the milk comes from. It’s also on the pricey side, so keep that in mind, too.