At any given time, you’re likely to spot multiple types of frozen pizzas in the Aldi Find freezers at Aldi. It’s an indication of how popular pizza is among Americans that the German grocer keeps a constant supply of various specialty pizzas rotating through it’s freezer aisle. Our favorite limited-time frozen pizzas include pan pizza, artisan style pizza, cauliflower pizza, broccoli cheddar pizza, and macaroni and cheese pizza. 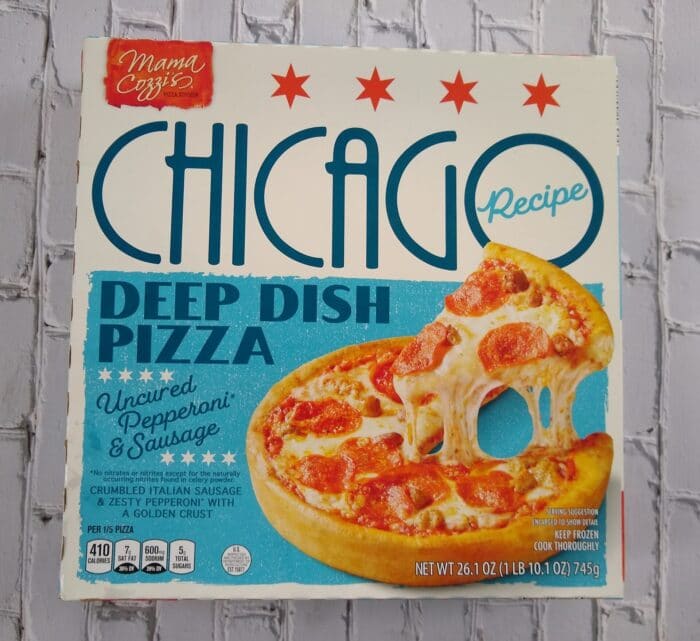 Mama Cozzi’s Chicago Recipe Deep Dish Pizza cost $4.99 at the time of publication. The cheese pizza is 26.3 ounces, while the uncured pepperoni and sausage pizza is 26.1 ounces. While they’re in stock, they can be found in the chest freezers where Aldi keeps its specials.

The deep dish pizza is an Aldi Find, which means it’s only in stores for a short time. Aldi won’t ship specials to you after they sell out at your local store.

Deep dish pizzas take a classic pie to a whole new level. They’re baked in a pan that has high sides, and they’re filled with tomato sauce, cheese, and other toppings, making them almost like a savory single-crust pie. Ingredients are usually added in reverse order to a deep dish pizza, with cheese on the bottom and sauce on top, because these pizzas bake for a longer time and you want to avoid burning the cheese.

The uncured pepperoni and sausage deep dish pizza I bought is advertised as “crumbled Italian sausage & zesty pepperoni with a golden crust.” It contains no nitrates or nitrites except for the naturally occurring nitrites found in celery powder. 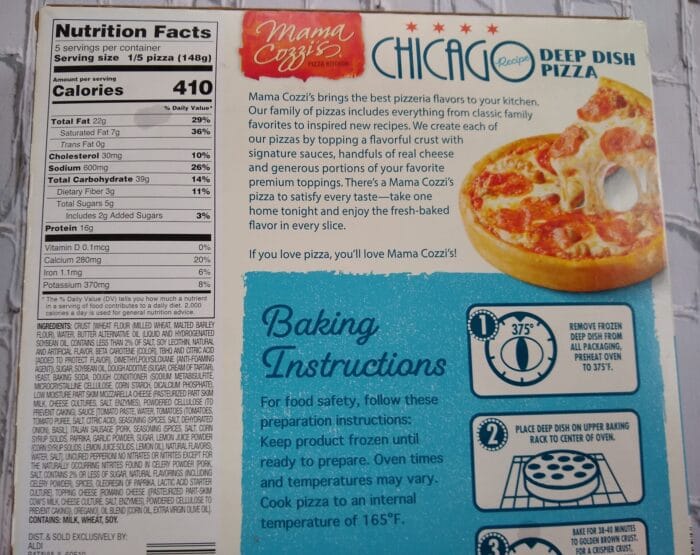 If you’re watching out for allergens, this contains milk, wheat, and soy.

To bake the pizza, preheat the oven to 375 degrees and remove the frozen pizza from all packaging. Place the pizza on the upper baking rack in the center of the oven. (I baked mine on a pizza pan with holes.) Bake for 38-40 minutes until the crust is golden brown. Bake an additional 5 minutes for a crispier crust. Remove from the oven and let it sit for 5 minutes before cutting. 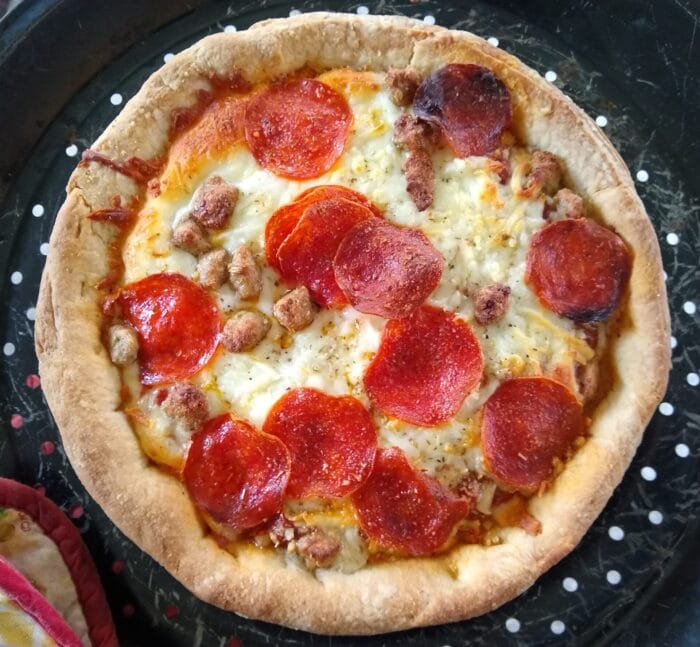 Our pizza after baking.

This deep dish pizza baked in about 35 minutes in my oven, which is slightly less than the directions indicate, so you’ll want to keep an eye on your pizza to avoid overbaking. We had to unstack and rearrange some of the pepperoni prior to baking so they were more evenly spread around the pizza. One of the pepperoni pieces got a little overcooked, but it wasn’t bad. Otherwise, baking this was a cinch.

Unlike traditional deep dish pizzas, this one actually has the cheese on top and sauce underneath. The sauce was less chunky than some other deep dish pizzas I’ve had; it was smoother and more like regular pizza sauce. Still, this is a good pizza overall. If you want a classic deep dish pizza, I’d probably still recommend the name brand Gino’s East, but this one is good on its own merits.

Mama Cozzi’s Chicago Recipe Deep Dish Pizza comes in cheese or uncured pepperoni and sausage varieties. My family tried the pepperoni and sausage one. It has plenty of cheese, a good amount of toppings, and a crisp crust. It’s not made in reverse order (with cheese on the bottom and tomato sauce on top) like traditional deep dish pizzas, and the sauce is less chunky than some other deep pizza sauces I’ve had. It’s still a good pizza, though.