I’ve seen a lot of variations on traditional crackers and crunchy snacks at Aldi, ranging from cauliflower crackers to green pea crisps, and most recently butternut squash crackers. 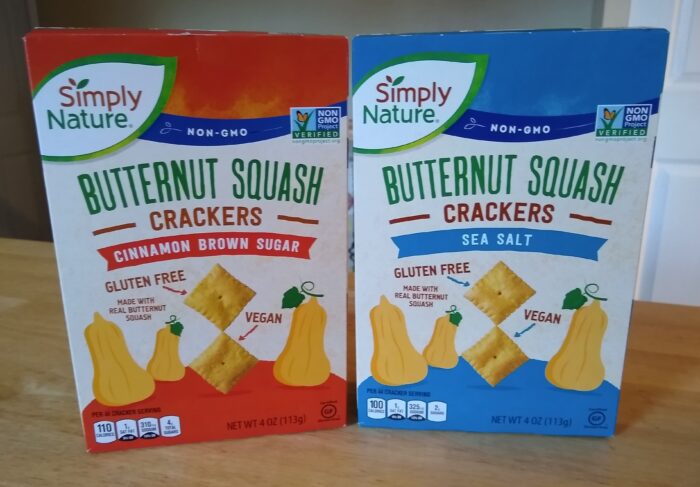 Simply Nature Butternut Squash Crackers cost $2.99 for a 4-oz. box at the time of publication. They come in two varieties: Sea Salt or Cinnamon Brown Sugar. The crackers are gluten free, made with real butternut squash, certified non GMO, and are a product of Greece. They’re an ALDI Find (Special Buy), which means they’re only in stores for a short time.

Despite coming in two different flavors, the ingredients are nearly identical for both of these cracker varieties, with the only real difference being that the Cinnamon Brown Sugar flavor has brown sugar. (Yes, the Sea Salt flavor contains cinnamon, although I can’t taste it.) Primary ingredients for both crackers include butternut squash, cassava, whole grain rice flour, potato starch, rice flour, and potato flakes. The ingredient list states they contain responsibly sourced palm oil. I also appreciate that these crackers don’t contain natural flavors like their cousins, the Simply Nature Cauliflower Crackers, do.

While a person might think these crackers are healthier because they contain butternut squash rather than flour as a primary ingredient, these are not necessarily a low-carb food. They come in at 20 to 22 grams of total carbohydrates per 28-gram serving, and just 1 gram of dietary fiber. It depends on your diet, but some of my friends who eat low-carb diets would not consider these crackers to be low carb. For comparison, Aldi’s Savoritz Reduced Fat Cheese Crackers (Aldi’s version of Cheez-Its) have 130 calories and 20 grams of carbs, making the Savoritz crackers just slightly higher in calories and identical in carbs to the butternut squash crackers. That does not mean these squash crackers are bad, but just be aware they’re not as low-guilt as you might hope.

My family does not care for squash, no matter how I serve it, and most of them instinctively turned up their noses at these crackers when they saw they contained squash. I don’t think they would have guessed they have squash if they had not seen the packaging, though. So if you’re trying to trick your family into eating squash, don’t show them the package!

I don’t think these butternut squash crackers taste all that different from Aldi’s Regular Buy cauliflower crackers, although they do have different seasonings that affect the taste; the cauliflower crackers come in a cheesy variety while these squash crackers come in Cinnamon Brown Sugar, for example, but the base flavor and texture seem very similar to me.

Here are some details specific to each cracker flavor: 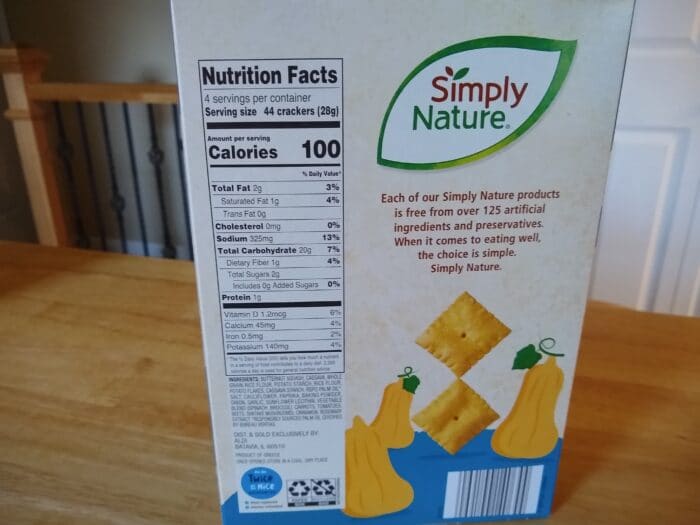 I thought these crackers had a mild taste and didn’t seem overly salty. They’re fine for snacking, dipping, or possibly tossed into soup or chili instead of regular Saltines. 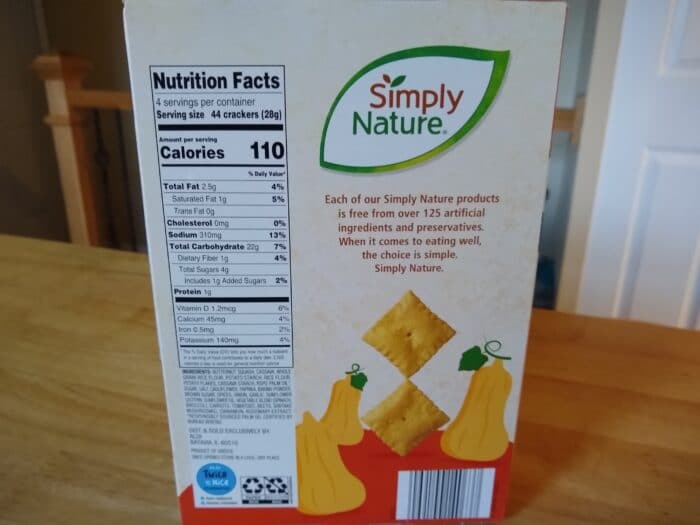 These were my favorite of the two cracker varieties. They have a nice but not overpowering brown sugar flavor while retaining a hint of savory flavor, good for people who like salty and sweet together.

Simply Nature Butternut Squash Crackers have squash as their primary ingredient, and they come in Sea Salt and Cinnamon Brown Sugar flavors. They have a nice crisp texture and taste similar to Aldi’s Regular Buy Cauliflower Crackers, although they come in some different flavors. If you’re hoping to find a low-carb snack, these might disappoint you, depending on your diet. They do taste pretty good, though, and I would not guess they contained squash if I hadn’t seen the packaging.