Snappers Milk Chocolate Peanut Butter Pretzels are not among Aldi’s Regular Buy offerings. They show up from time to time as a Special Buy or ALDI Find. They look a bit like Turtles candy or like those homemade candies that are popular during the holidays that consist of Rollos slightly melted on top of pretzels. They are not quite the same, but they are just as tasty. My family of four devoured the four-serving bag in minutes. 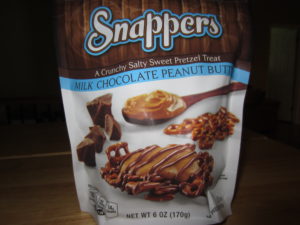 Snappers are “a crunchy salty sweet pretzel treat.” Each Snapper is a cluster of tiny pretzels topped with peanut butter and drizzled with milk chocolate. They are sold at other stores such as Costco, Walgreens, CVS, Dollar General, and an upscale grocery chain in my neighborhood. Other flavors that were not available at my Aldi include Dark Chocolate Sea Salt with Caramel Snappers and Original Milk Chocolate Snappers.

The Snappers website states that the family company has been making chocolates since 1914. The Snappers blog contains information about sustainable cocoa and mentions that the business is specifically interested in supporting women cocoa farmers because Snappers itself is a Certified Women Owned Business. The blog also features a large number of recipes for treats you can make using Snappers such as Snappers Caramel Apple Bars and Peanut Butter Snappers Rice Krispie Treats.

In random trivia, from the looks of a photo on the back of the Snappers packaging and on the Snappers website, Snappers was featured in an episode of the television show Mr. Rogers’ Neighborhood. The company gives no explanation of the photo; it’s simply there.

From a nutrition standpoint, one 3-piece serving of Snappers will net you 190 calories, 5 grams of saturated fat, 135 mg of sodium, and 14 grams of sugar. They’re not terribly great for you, but they do taste good.

Aldi sells Snappers as an occasional Special Buy or Aldi Find item, but these snacks can be found regularly at places such as Costco, drugstores, and dollar stores. The Milk Chocolate Peanut Butter Snappers consist of tiny clusters of pretzels topped with peanut butter and chocolate. They taste and look a bit like Turtles or like the Rollo-and-pretzel homemade candies that are popular during the holidays. Snappers aren’t good for your diet, but if you share the bag with a few friends, your diet won’t suffer too much. Recommended.