I was excited when Aldi’s ad recently showed that a metal rolling cart, similar to a popular cart sold at IKEA, was coming to stores. I checked my local Aldi store on the day the carts were supposed to be available and found nothing. I didn’t see any carts until about three weeks later. Two of them — one white and one teal — sat boxed up near an endcap, with no signage indicating the price. I picked up the teal one. Initially, these carts were $24.99, but mine rang up discounted at $12.50.

I thought I was getting a good deal. I was wrong. 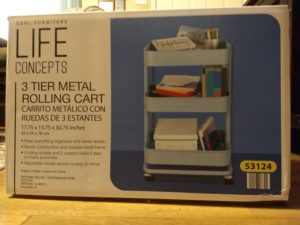 The SOHL Furniture Life Concepts 3 Tier Metal Rolling Cart, an ALDI Find (Special Buy), measures 17.75 inches by 13.75 inches by 30.75 inches tall. It has three shelves or bins and four wheels for portability. The box claims the “adjustable middle section is easy to move,” but given that it is bolted on just like the bottom and top sections, I’m not sure how that would work.

The box also states this cart is “perfect extra storage in your kitchen, bathroom, laundry room, home office, or bedroom to adapt to different storage needs.”

The box my cart came in had one flap already opened, but all the pieces were there, so I bought it. I’m not sure if someone else had already purchased and then returned my rolling cart. Knowing what I know now, after my own experience assembling the cart, it’s quite possible someone returned it before me. 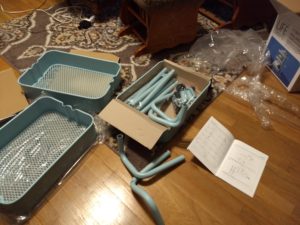 All the pieces, plus the manual, before assembly.

You’ll need a screwdriver with a Phillips head to assemble the cart. It came with a wrench to help with assembly. A manual was included with instructions and illustrations for assembly. In general, the manual was easy to follow, but the middle and top pipes (the pieces on each side that the bins bolt onto) on my cart did not go on quite like the manual illustrated. I also thought some of the bolts were on the short side, and it took some work and some jiggling to fasten some of the corresponding nuts onto the shorter bolts.

What killed it for me was that when I put the four wheels on the bottom of my cart, they were not straight. I double checked to make sure I had screwed the wheels on correctly. It was clear that the holes where the wheels screw on were not set straight on the bottom of the cart’s frame. As a result, all four wheels didn’t touch the floor at the same time, and my cart was not level. It rocked up and down when I pushed on it. When I showed it to my husband, he remarked that the way the holes were drilled was “shoddy workmanship.” 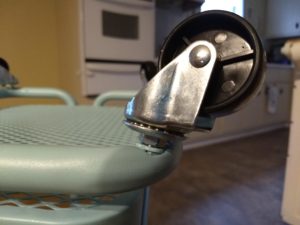 One of the wheels, screwed into a crooked hole. Three of the four holes were like that, and at different angles. (Click to enlarge.) 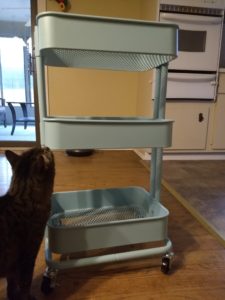 It was only okay if you didn’t touch it or look at it too closely.

Often, in these situations, I’ll contact the manufacturer for help. I couldn’t this time, because there was no phone number or email for after-sales support for this product, and it did not come with a warranty.

Even though I bought the cart half price, I was unhappy enough with it that my husband and I took it apart and packed it back in the box, and I am going to return it to Aldi. I’m not sure if all of the carts are like mine or if I just got a bad one. Even if I were able to find another cart in an Aldi store, I don’t think I would take a chance on it. I was looking forward to having a cheaper IKEA look-alike cart, but that clearly did not happen.

Aldi’s Special Buy (ALDI Find) SOHL Furniture Life Concepts 3 Tier Metal Rolling Cart looks like a popular IKEA cart and costs less money, but the cart I purchased was a bust. The holes where the cart’s wheels screw in were not drilled straight and, as a result, my cart did not stand level and the wheels did not all make contact with the floor. It’s also notable that there is no warranty and no phone number or email for after-sales support on this cart.

So back to the store it goes.