Aldi is beginning to roll out its gardening products, which is a sure sign that spring is coming. The Gardenline 4-Tier Greenhouse sells for $19.99 at my local Aldi. I thought it would be a nice way to get an early start growing some of my tomato, herb, and flower plants this year. At the time of this post, Amazon.com sells what appears to be the same greenhouse for $35 under a brand known as Ohuhu. 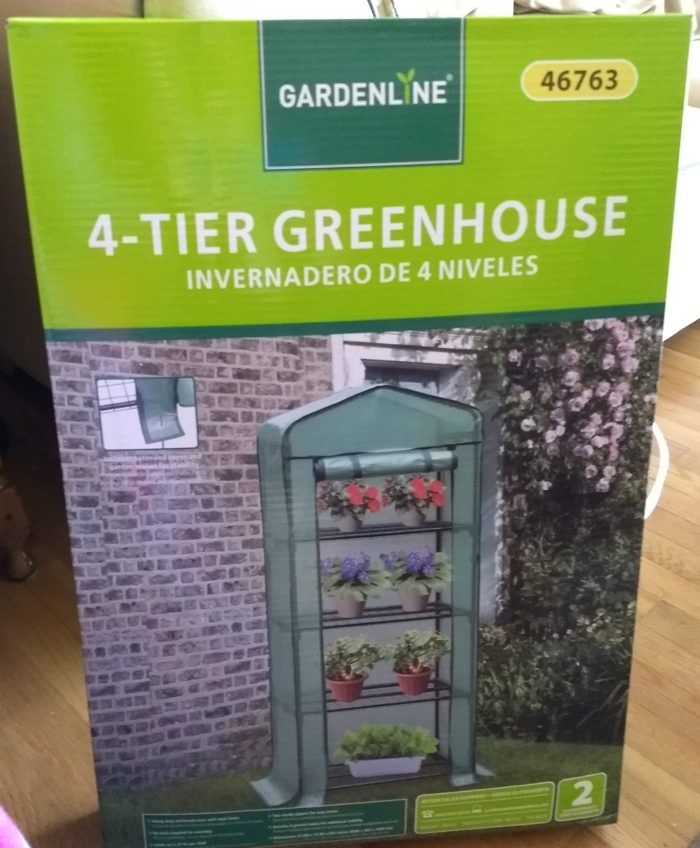 The greenhouse is utilitarian and purely functional. It doesn’t have much in the way of good looks or stylishness, but it should be fine out in the backyard, next to my raised garden beds and up against our wood fence. No surprise: I have to buy pots and plants to put inside the greenhouse separately, but that was easy because Aldi was selling seed packets, seed starting potting mix, and decomposable starter pots at the same time. I’ve also had good experiences in the past with Aldi’s mini greenhouse kit for starting seedlings indoors.

This greenhouse is fairly simple. It’s a steel frame shelf set measuring 63 inches tall, 27.2 inches wide, and 19.3 inches deep. It comes with a heavy duty reinforced cover — a plastic tarp — with two zippers for easy access to the shelving inside. Each shelf holds up to 22 pounds. No tools are required for assembly, and the kit includes four ground stakes for additional stability.

Assembly is straightforward. It consists of fastening poles vertically and horizontally into plastic supports. The support poles were a little loose and popping out in places when I assembled the greenhouse, but they seemed better after I turned the frame on its side and applied firm pressure. The stability also improved as I continued to build upward. 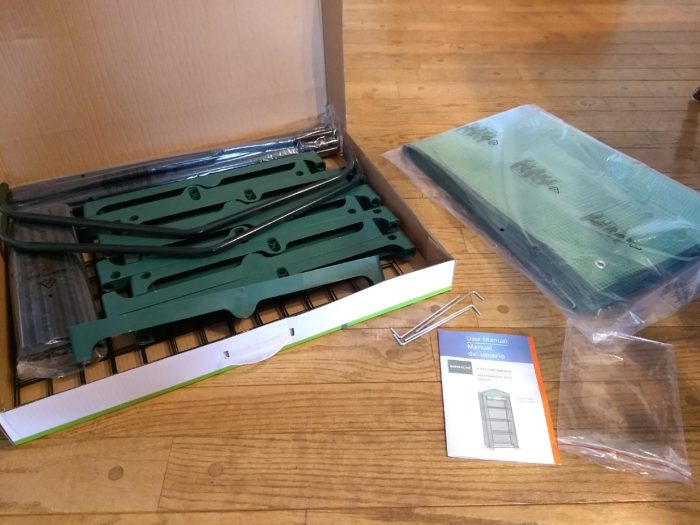 What it looked like when I opened the box: there are metal poles and plastic supports resting on top of wire shelves, and also the plastic cover and a manual. (Click to enlarge.) 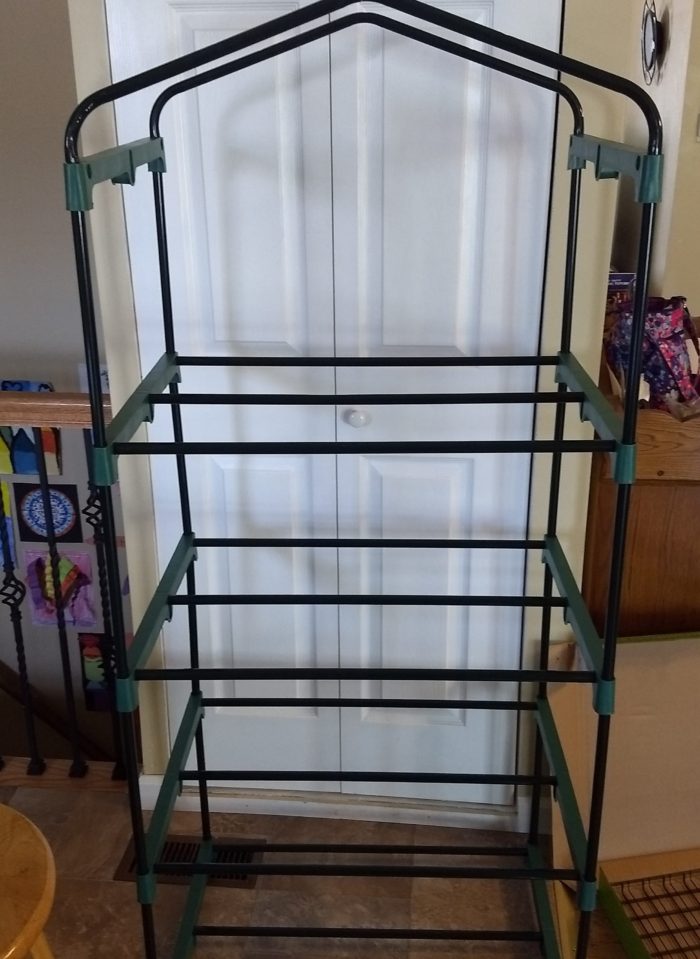 What the frame looks like before the cover and the shelves go on. I assembled this inside my house because … well, it’s cold outside. (Click to enlarge.)

The cover fits snugly and I had to gradually tug it on, working my way around all sides, to get it in place. The last thing to do is set the wire shelves on the horizontal support poles. There is nothing special about the wire shelves that hold your potted plants and seedlings. They simply rest on top of support poles; they move easily when bumped and they don’t snap into place. Once I get the shelves filled with plants, they should stay put. 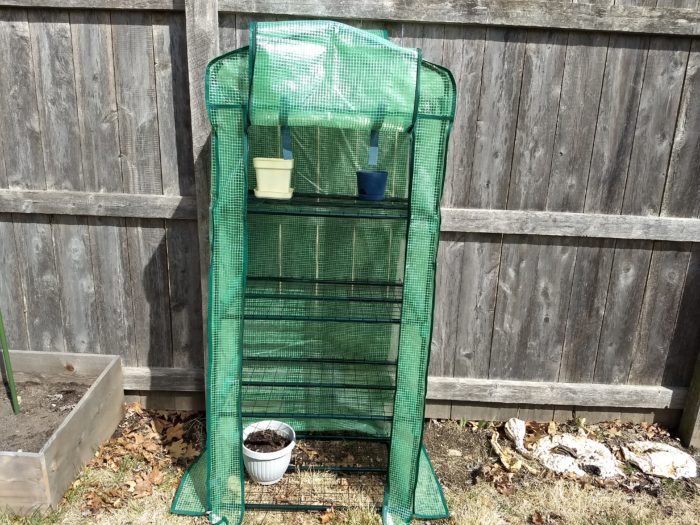 The greenhouse outside in my garden, ready for some new occupants. (Click to enlarge.)

I placed my greenhouse in my backyard against our wood fence and near my raised garden beds. It’s in a spot that gets a good amount of sunlight and is near the garden hose for easy watering. The greenhouse’s small size means it can go in a number of places. I read a review of the (same) greenhouse on Amazon where the customer placed it on their apartment balcony; it would be great in a small space like that both for starting new plants and also for maximizing growing space because the cover can be removed completely once outdoor temperatures warm up.

The greenhouse came with four basic stakes that can be inserted into grommets on each corner of the cover and pushed down into the ground to add stability, especially during windy days and nights. If the greenhouse is placed on a patio or balcony, you won’t be able to use the stakes, so be sure the lower shelves are loaded with some heavier (but not too heavy) pots to add some weight in case of wind.

The greenhouse is suitable for small pots and for biodegradable seedling starter pots placed in trays, but some of my medium-sized garden pots are too heavy for the shelves, which have a 22-pound weight limit. That will be something to keep in mind throughout the growing season.

The greenhouse does a great job of holding warm air inside when the sun is shining. After leaving it zipped closed in the sun on a 50-degree day for a few minutes, it felt noticeably warmer than the outdoor temperature when I stuck my hand inside, perhaps by about 5-10 degrees, but that is a rough estimate and it might have been warmer than that. Later when the day grew cloudy, there was less of a difference between the temperature inside the greenhouse and the outdoor temperature, roughly 5 degrees or less.

It’s important to note that the manual says to remove the cover when outside temperatures reach 60 degrees or more, and it warns that extreme heat and sun will melt the plastic cover.

On days when I’m not ready to completely remove the cover but want to expose my plants to the breeze to help harden them off, the front of the cover rolls up and Velcros into place so the greenhouse is open on one side.

Overall I’m happy with my purchase and ready to start growing things. The only thing that remains to be seen is how well the greenhouse withstands my local weather and the regular thunderstorms and breezy days that are part of life in the Midwest. Check back later for updates on how things are going.

UPDATE (April 2020): I’ve had this greenhouse for two years now, and it’s a useful tool to help get seedlings started a few weeks early. 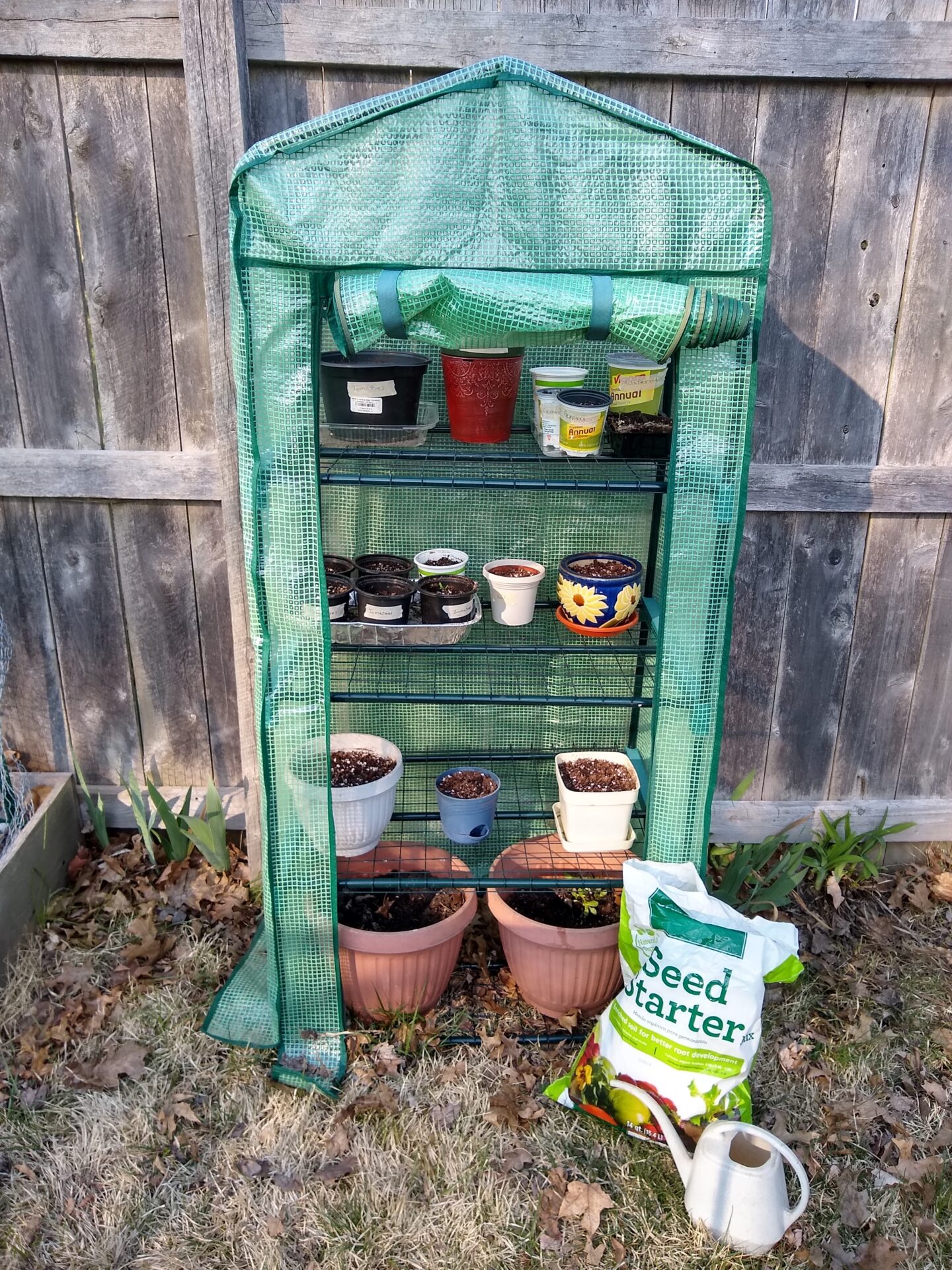 The greenhouse after two years of use.

During the first season I had it, the plastic tarp tore away from one of the metal grommets where stakes are placed to add stability. Another one of the metal grommets came off completely, and to work around that I used the stake to poke a new hole nearby in the tarp to secure it to the ground. I probably could have requested a new tarp because the greenhouse has a two-year warranty, but the tarp is still perfectly usable, so it wasn’t a big deal.

The greenhouse is small enough that I sometimes move it around my yard, keeping it near my garage when it’s not in use and setting it out near the garden each spring. The shelf framework often pops out of place in multiple spots when I move the greenhouse, so once I have it where I want it, it’s a good idea to push everything back together again before loading the shelves with potted plants.

Those minor issues aside, this is a good greenhouse for the price and I’m happy with the purchase.

Aldi’s Gardenline 4-Tier Greenhouse looks identical to a greenhouse sold on Amazon.com, but the Aldi greenhouse costs much less. It doesn’t seem to have the sturdiest construction, but it appears to be adequate and comes with a two-year warranty. It assembled easily, takes up little space in a yard or on a patio or balcony, and warms up quickly inside the cover on sunny days to protect plants from colder outdoor temperatures. Recommended.