Peanuts are one of my very favorite snack foods. I’ve been a fan of them since I was a kid. My favorite peanuts are the ones you crack out of a shell, but when those aren’t available or practical, I have no problem going for the dry roasted salted peanuts in the familiar tall plastic container.

As a connoisseur of peanuts, I’ve learned a hard life lesson about them: I usually find brand peanuts to be superior to store label ones.

This point has been something I wish wasn’t true, but it is. Planters Peanuts, for example, are some of my favorite peanut brands. They’re good, crunchy peanuts with a great blend of seasoning to give them a really good snack taste. By contrast, the vast majority of grocery store brand peanuts use seasonings that are not as good, and some of the worst offenders have a bland, forgettable taste. This hurts in the pocketbook because Planter’s Peanuts are usually more expensive than other options. 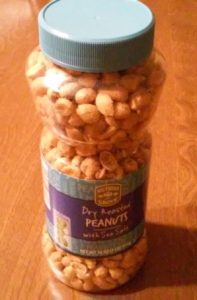 When I first started shopping at Aldi, one thing I generally avoided was Aldi peanuts, instead picking up the snack from the higher-inventory grocer I would patronize to get the things I couldn’t find at Aldi. It wasn’t that I didn’t like Aldi peanuts — I hadn’t actually tried them. I mean, why bother, after all the failed grocery store peanuts?

One day, though, I decided to take a risk on them. I’d already taken a chance on Aldi cashews and found them to be pretty good, so I figured, why not?

I was pleasantly surprised. In my opinion, they’re better than just about any store brand peanut I’ve ever bought. (And, again, trust me — I’ve tried them all.) The crucial difference is in the seasonings, which Aldi’s peanut gets more of — and a better blend of — than its counterparts in other stores.

Does that make it better than Planters? That’s debatable, and my answer is probably not. But they’re a lot closer to the Planter’s benchmark for less money, and that at least makes them competitive. 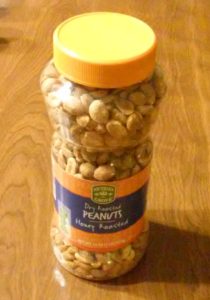 They’re not quite a flavorful as Planters, either — they don’t seem to have quite as much honey coating — but they’re not bad as an inexpensive substitute.