One difference between us and most other sites that talk about Aldi is focus. Most sites, not being fully devoted to covering Aldi products, see the German grocer as just another topic in their portfolio, focusing only on the splashy, more exotic fare, usually in the limited-buy category. In practice, that means that they’re more likely to explode with glee over Chocolate Red Wine and less likely to care about, say, butter.

We, naturally, like to talk about both the exotic and the mundane, because 1) we talk about Aldi and 2) shoppers visit our site looking for information about both. What we have here is one of those more unusual products that a number of general-purpose foodie sites got pretty hyped over. 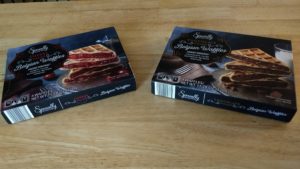 Specially Selected Belgian Waffles are an ALDI Find, which means they’re only stocked once for a limited time, and when they’re gone, they’re gone, probably for a long time. The waffles come in both cherry-filled and chocolate-filled flavors. Each frozen box costs $3.99 and comes with four waffles. (The box boasts that the waffles won a National Restaurant Association’s Food & Beverage Award.) 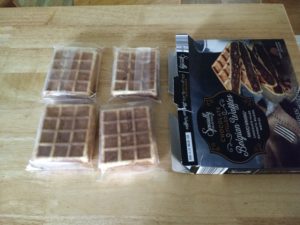 Our first observation pulling them out of the box is that they’re decent-sized but not huge, something worth noting since they are essentially a dollar a waffle. A single waffle (even two) wasn’t really enough for a full meal for any of us. Given that we had to supplement the waffles with other things, these are among the more expensive breakfast options we’ve purchased from Aldi.

Both versions have the same cooking instructions, and they give you several options, with variations on both frozen and thawed, and with a few different cooking methods. The package warns not to refreeze after thawing, though, so if you choose to thaw before heating, be aware.

If you want to cook the waffles from frozen, it’s pretty straightforward. Preheat the oven or toaster oven to 400 degrees, remove the wrapper from the waffles, place the waffles on a baking sheet, and cook for 12-14 minutes before letting cool.

To thaw the waffles, the instructions give you no fewer than three different ways to thaw them: 1) leave them in the wrapper, thawing them at room temperature for up to two hours, 2) leave them in the wrapper, thawing them in the refrigerator for up to 12 hours, or 3) remove them from the wrapper and heat them in the microwave for about 25 seconds or until “slightly soft.” The instructions warn to eat room temperature thawed waffles within eight hours for best flavor, and they warn to eat refrigerated waffles within three days for best flavor.

To cook the thawed waffles, you can either bake or toast them. To bake, you preheat the oven to 400 degrees, then bake for 4-5 minutes. To toast them, you can toast them on medium heat for 2 minutes, then let cool before eating.

We opted for the frozen baking method, because it was, honestly, the easiest. 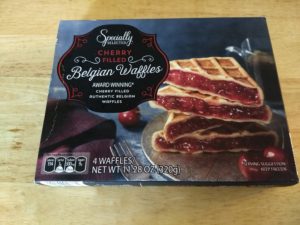 The cherry-filled waffles were interesting. The exterior is a crisp waffle, while the interior is a tart cherry filling not unlike what you’d find in a pastry. In a vague way it reminds me a little of a cherry turnover, although the crust here is less flaky, being that it’s a waffle.

Most everyone liked the cherry interior, but our testers were divided on the exterior. Some of us liked the waffle crust, while others found it a little bit bland. 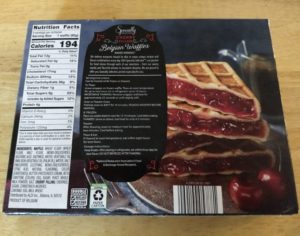 Ingredients, nutrition, and cooking instructions for the cherry-filled waffles. (Click to enlarge.) 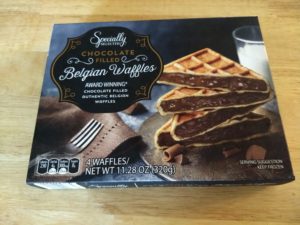 The waffle exterior on the chocolate-filled was the same as the cherry-filled, so once again our testers were divided on that front. Some people liked the taste and some did not.

The difference here is that the interior was also polarizing. I think that, going into it, I was expecting maybe a fudge interior, or maybe something like a really soft s’more. Instead, I got an interior with a texture and taste like chocolate pudding. I thought it was okay, but I can’t say it was all that I hoped for. Other testers liked it more. Ultimately this one will come down to whether or not you like a pudding-like filling in your waffle.

Ingredients, nutrition, and cooking instructions for the chocolate-filled. (Click to enlarge.)

Aldi certainly serves up something different with these stuffed Belgian waffles, but despite the fact that they’re labeled as award-winning, our testers had mixed opinions of them. While both varieties were crisp on the outside, we were divided on the taste of the waffle; I liked the exterior taste, but not everyone else did.

Ultimately, I think these aren’t bad to try, although at a dollar per waffle they are on the expensive side, especially for what you get.