When it comes to seafood, Aldi keeps a fair stock of Regular Buys — shrimp, for example — but also occasionally rotates out Special Buys (ALDI Finds) that range from the simple to the more exotic. This being Aldi, you expect competitive prices, but you also sort of expect that, when it comes to things like crab or lobster, you’re going to pay more per ounce simply because that’s what the market is. 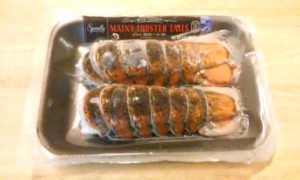 Sure enough, Specially Selected Wild Caught Maine Lobster Tails, a Special Buy (ALDI Find), aren’t cheap. Eight total ounces of lobster tail, split between two four-ounce tails, ran $12.99 at the time of this post. We think that’s fairly competitive for our area, but paying about $13 for half a pound of any food isn’t sustainable unless you’ve got a lot of money, so this is definitely a rare luxury food, at least for us.

According to the packaging, the lobster tails are “certified sustainable” seafood by the Marine Stewardship Council. The product “comes from a fishery that has been independently certified to the MSC’s standard for a well-managed and sustainable fishery.” The packaging also declares that the lobster was pot-caught in the North Atlantic, and that lobster is its only ingredient.

The cooking instructions come in a few methods, but all of them recommend either with thawing the tails in the refrigerator or submerging them in cold water to quickly thaw before cooking. Once you’ve done that, you can either grill, broil, steam, or boil the tails.

Grilling and broiling both involve preheating to medium heat (about 375 degrees F / 190 degrees C), then butterflying the tails by using scissors to cut lengthwise through the top, or curved side, of the shell. After that, you spread on butter, olive oil, or another marinade, then cook with the meat side up for 4-5 minutes, followed by cooking with the meat side down for 3-4 minutes.

Steaming is simple. You steam the thawed tails with water or a little white wine for 6-7 minutes.

Boiling involves a quart of water plus a teaspoon of salt, then submerging the tails in boiling water. After the water returns to a boil, you cook the tails for 5-6 minutes if thawed or 8-9 minutes if frozen. As we’ve done with lobster tails in the past, we thawed the tails first, then boiled them.

We thought they tasted … okay. They didn’t have as much flavor as we’ve had with lobster tails in the past, despite the fact that we used the same preparation method we’ve used in the past. Seafood can be a fickle thing, so a different set of tails might turn out different, but it didn’t quite pan out for us. When you’re consuming something that already has 22% of your daily allowance of sodium, and dipping it in salted butter to boot, you hope for more taste.

Specially Selected Wild Caught Maine Lobster Tails are reasonably competitive in price to lobster tails we’ve purchased elsewhere, but our batch, at least, seemed a little bland on taste compared to similarly prepared lobster tails we’ve made before. They didn’t taste bad, but if you’re hoping to get more flavor out of them you might consider the grill / broil method over boiling.