Ice cream is a marvelous dessert. If it wasn’t, it wouldn’t sell so well. It’s sweet, filling, and hits the spot on a hot summer afternoon. Whether it’s a vanilla sundae or mint chip in a sugar cone, ice cream lights up faces in ways few other food products can.

Ice cream is also not very good for you. It’s high in sugar, has plenty of fat, and is pretty much guaranteed to go straight to your waistline. We mostly avoid the stuff in our household aside from special holidays or birthday celebrations because it’s too big a temptation to eat in large quantities.

There is, then, some appeal to ice cream that finds ways to reduce the sugar count, and so much the better if it can still taste decent. In recent years, “high protein” ice cream has become increasingly popular for that reason, offering a more keto-style approach to the dessert.

Aldi sells a high protein ice cream, and it’s currently available in the store all the time. 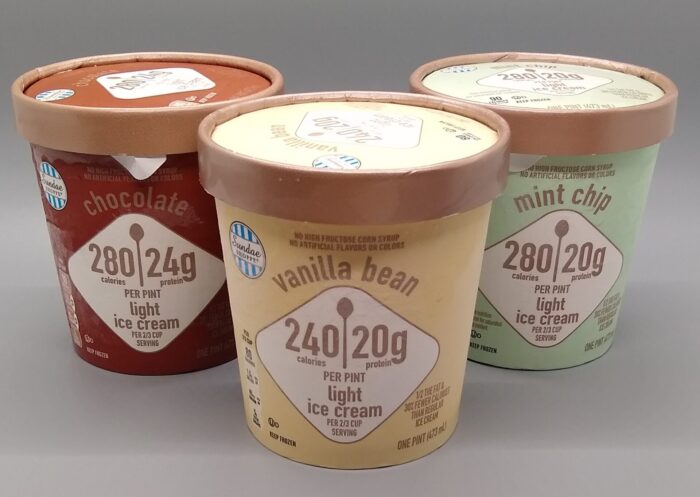 Sundae Shoppe High Protein Light Ice Cream (Product Code: 58376) is an Aldi Regular Buy, which means it’s part of the everyday core range. Aldi sells it all times of the year, including in the winter. The package calls it “Light Ice Cream” but both the price tag and the Aldi website refer to it as “High Protein Ice Cream.” It comes in single pints, or 16 ounces.

At the time of this post, the pints each cost $3.39, or about 21 cents an ounce. Walmart currently sells high protein ice cream for $4.98 a pint, which makes the Aldi version a pretty stellar deal.

Of note: all three flavors contain erythritol, a sugar alcohol that acts as a sugar substitute. That’s how the ice cream manages to be lower in sugar. Studies also indicate that, because it is passed through your body, that erythritol doesn’t spike blood sugar levels, which can benefit diabetics. 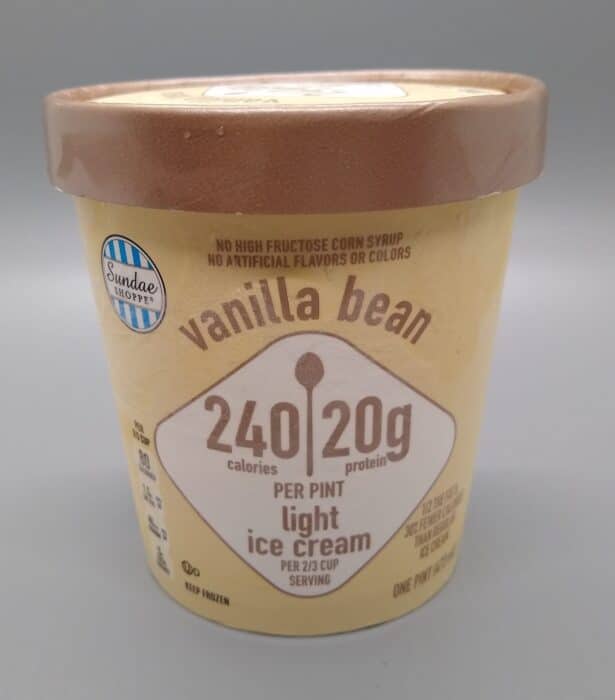 We’ve had keto-friendly ice cream before, so we know a little bit about what we’re getting with erythritol. It tends to produce ice cream that freezes harder, is more crumbly, and has an almost drier taste. 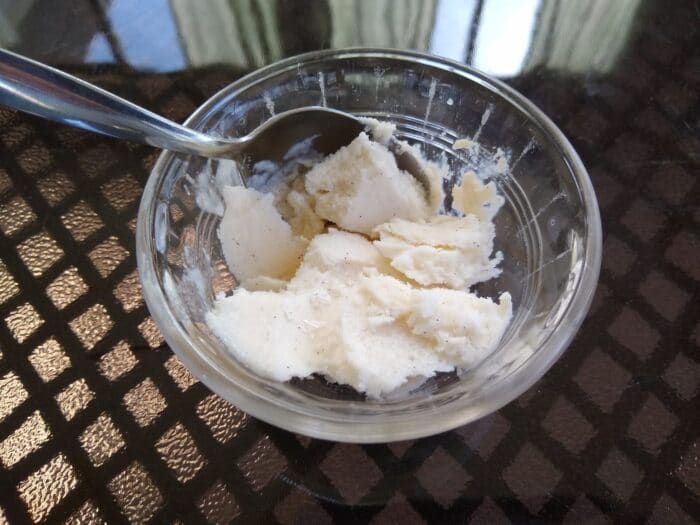 Sure enough, that’s what we got with the vanilla bean. We had to set it out of the freezer for a few minutes to be able to scoop it out, and it came out in flaky chunks.

Taste-wise, it tastes a little bit like vanilla ice cream and has visible specks of vanilla beans, but it’s also different. It has a flatter taste, and also a bit of an aftertaste. We thought it was in the middle of the pack with regard to taste.

If you’re looking out for allergens, the ice cream contains eggs and milk. 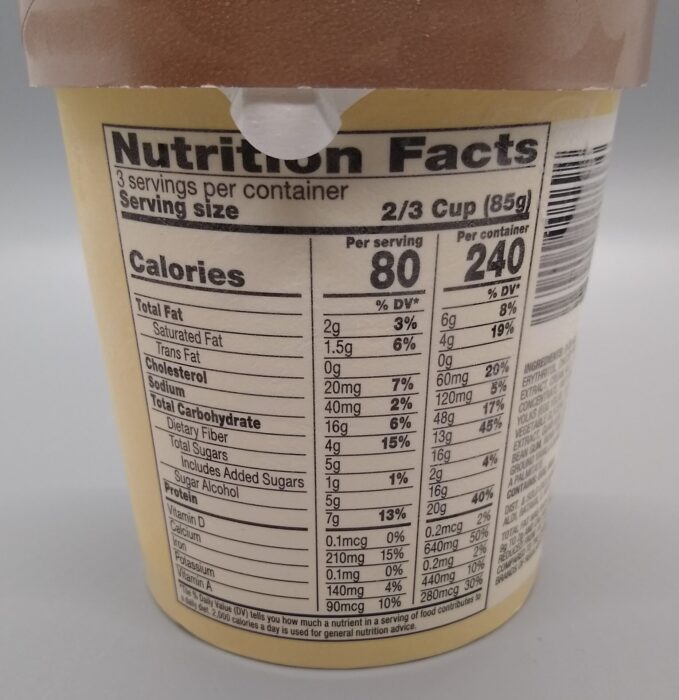 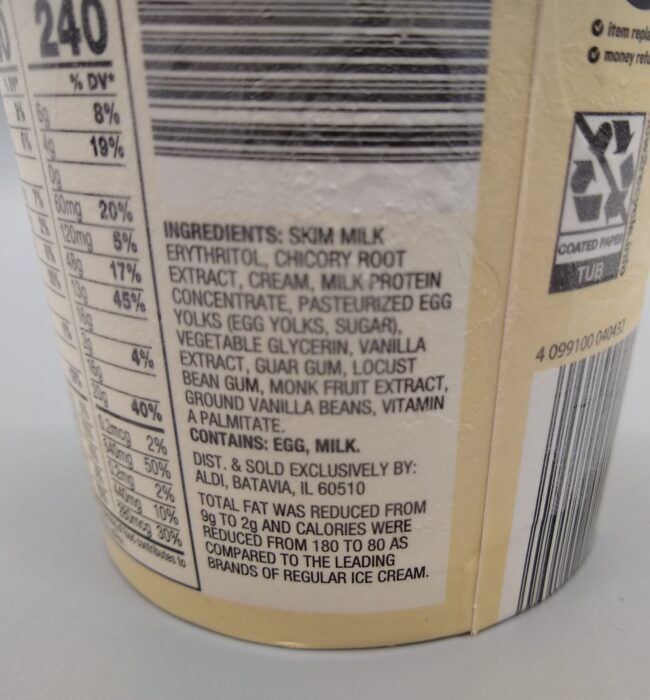 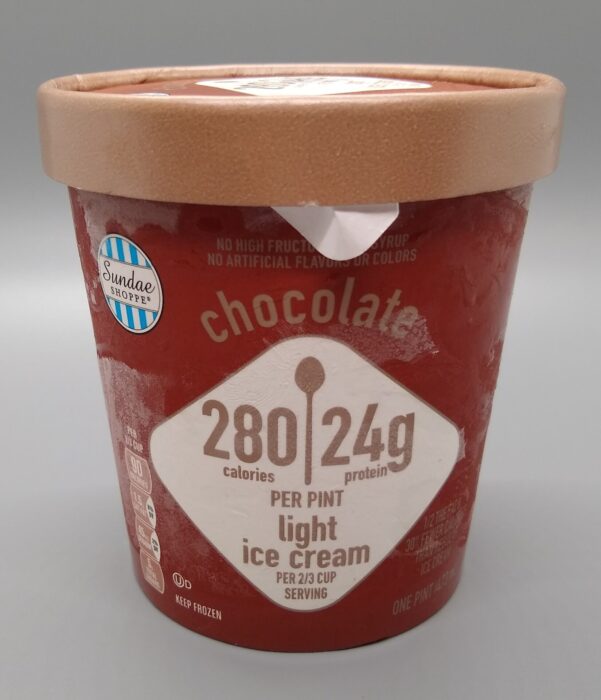 The chocolate was a little creamier than the vanilla. It scooped more easily, although we still had to let it sit out for a bit and it still came off in flakes. 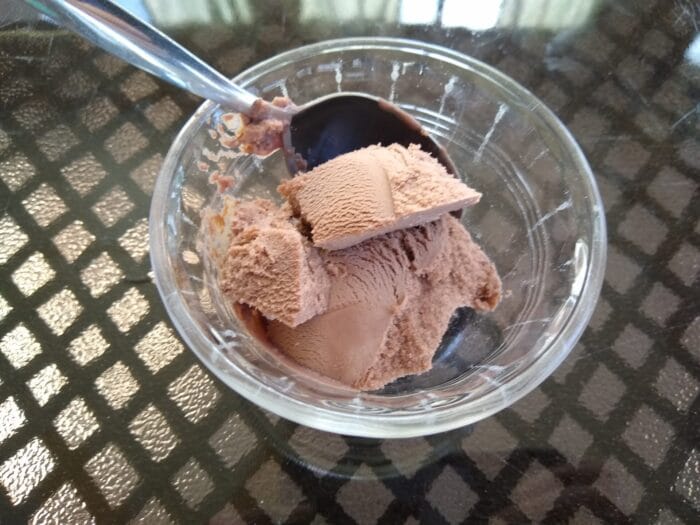 It was our favorite of the three. The chocolate flavor is more muted than a typical chocolate ice cream, but it wasn’t bad. It also helped that the texture was a little smoother than the vanilla bean. 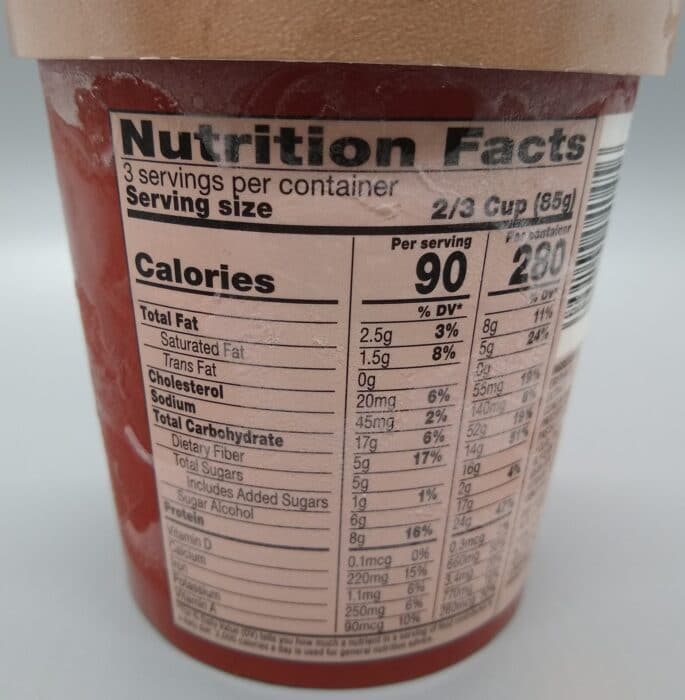 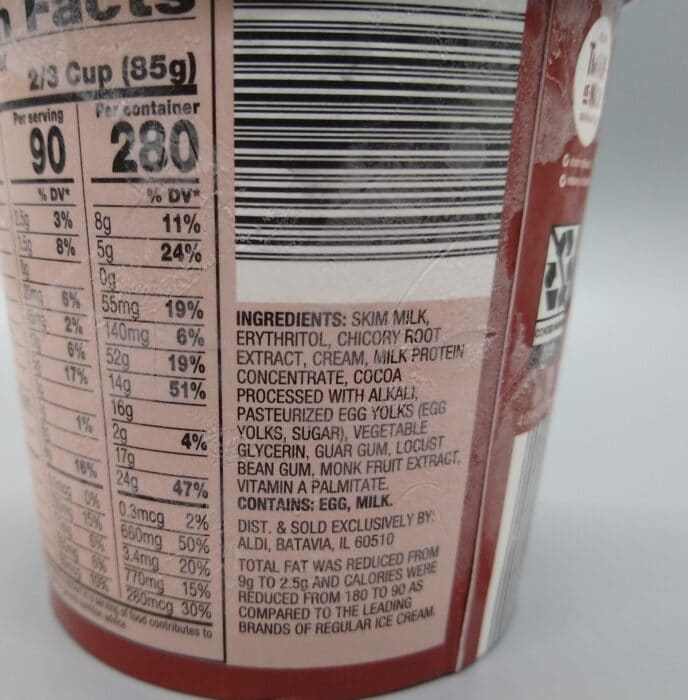 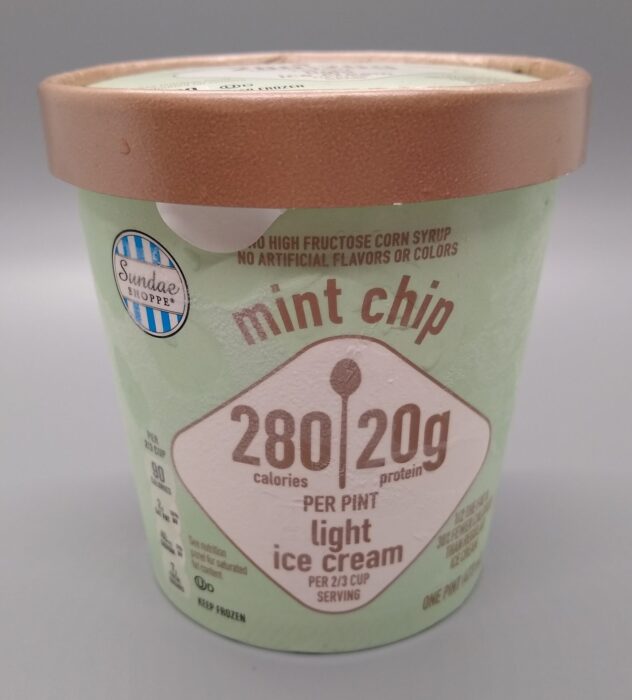 The mint chip had a very similar texture to the vanilla bean. Like the others, it came out of the freezer hard so we had to let it sit for a little while. Also like the others, it flaked off in chunks and it was dry and crumbly. 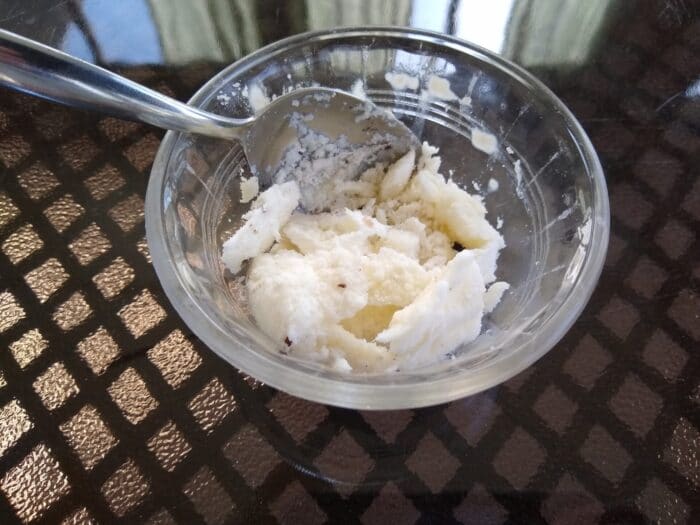 This was, hands-down, our least favorite flavor. It had only a distant mint taste, and the aftertaste lingered for a long time after trying it. We have mint lovers in our family who quit after one bite. They thought this had almost a gritty or sludgy texture. 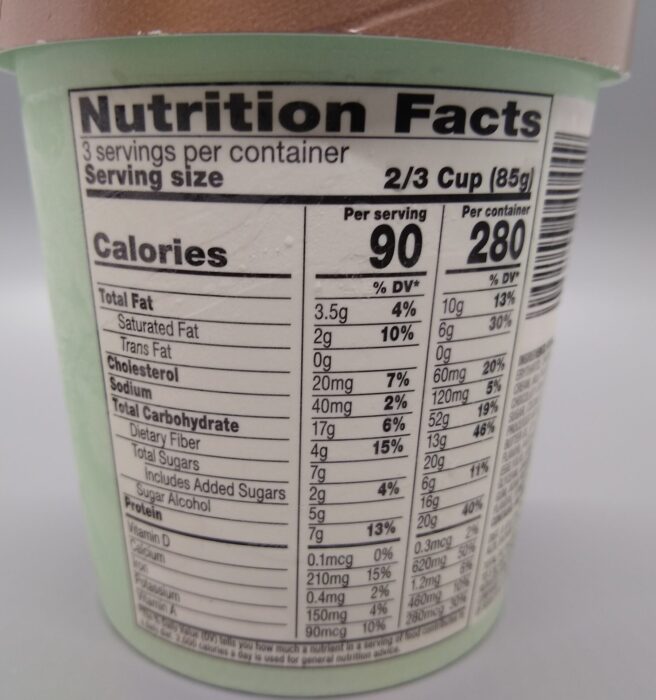 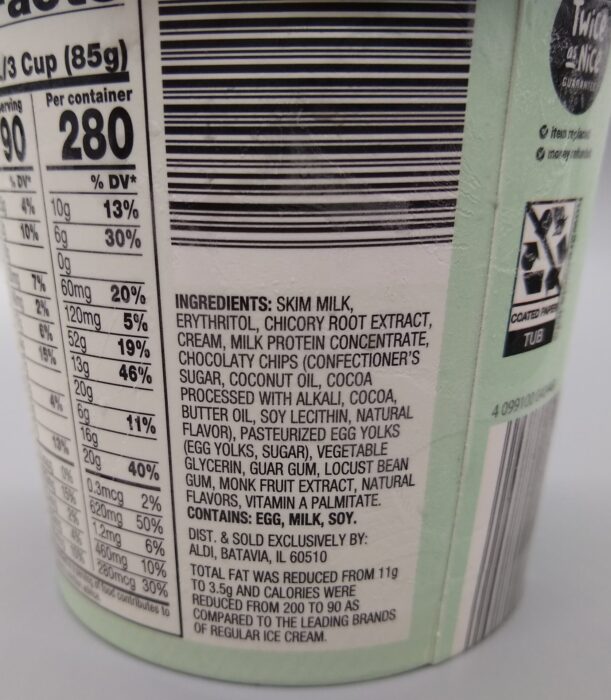 Sundae Shoppe High Protein Ice Cream — or Light Ice Cream, if you prefer — is a different experience than a traditional ice cream. If you haven’t had it before, be aware: it’s crumblier and drier than a regular ice cream. It also has a different flavor than regular ice cream and can also have an aftertaste, thanks to the sugar substitute used. In our view, it’s inferior to the real thing.

But not everyone can have or wants the real thing. What then?

Well, if you’re comfortable with erythritol-flavored ice cream that is lower in carbs, this ice cream has some things going for it. The Aldi version is one of the cheaper “light” options out there, for one. For another, you do have some flavor options. In that case, we recommend the chocolate, which we think has the best taste and texture of the three.