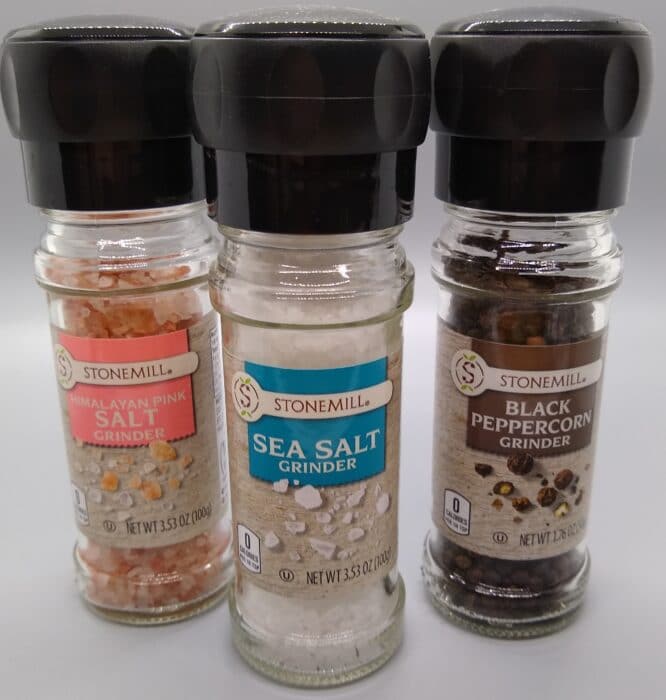 Stonemill is the Aldi house brand devoted to seasonings and spices. From the essential to the pure fun, Stonemill-branded products have a prominent place in my pantry’s spice rack. Sometimes I need something with real pizzaz to season what I’m eating, while other times I just need something straightforward.

Here I’m going to look at the most straightforward spices of them all: salt and pepper. These are not only a given at any table, but they’re my go-to combination — alongside oil — for marinating a good cut of meat. Now, Aldi sells salt and pepper in pourable containers if you want those. If you’re looking for something more upscale, though, Aldi has grinders. All three of these are Regular Buys, meaning you can find them in stores all the time.

A few years ago, we tried out Aldi grinders. We had mixed success with them, with some of them breaking before we’d used up the spices. We tried them here again … and once again we had a problem. More on that in a moment. 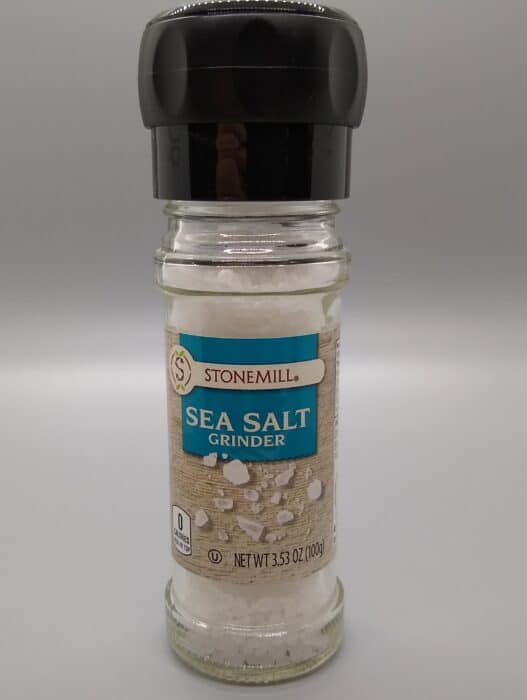 Sea salt has become something of a trend in recent years. The reason: it’s produced in a way that requires a little less processing than table salt. There’s no evidence that it’s better for you than table salt, though, and it contains comparable amounts of sodium, so use in moderation.

The grinder does what it’s supposed to — it turns out salt. And yes, it tastes like salt. 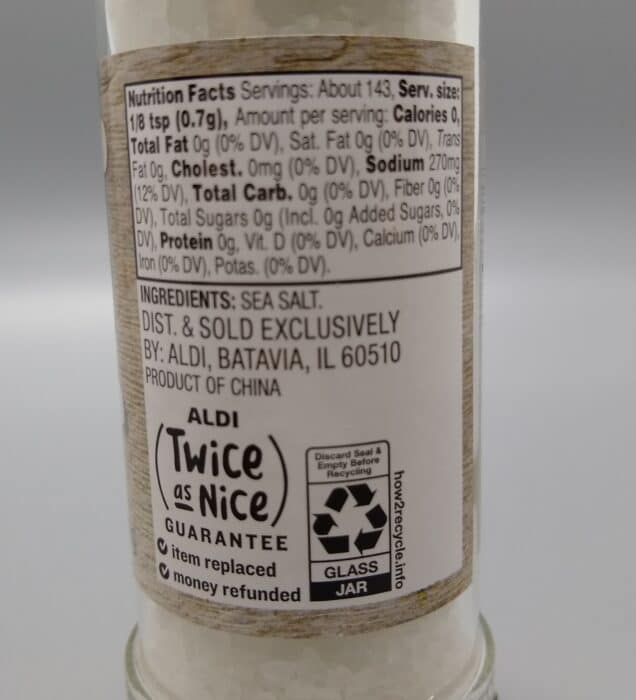 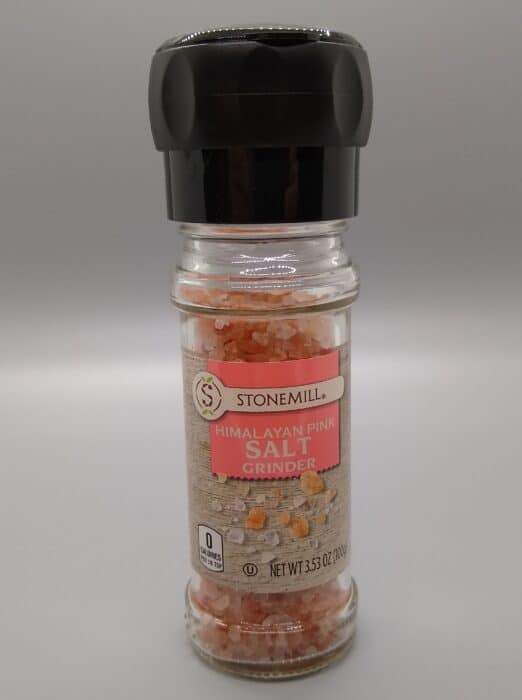 This grinder cost $1.89 for a 3.53-ounce container, just a fraction less than the sea salt.

Himalayan pink salt comes from salt mines in the Himalayas in Pakistan. It has become a fad in its own right in recent years, due to the fact that it contains trace minerals. Despite some claims, there isn’t any available evidence that it is any better for you than any other kind of salt. Like sea salt, or any kind of salt, it’s best in moderation, as it has the same amount of sodium as other salts.

The grinder seems to work just like the one with sea salt, and I couldn’t taste any difference between sea salt and Himalayan salt. 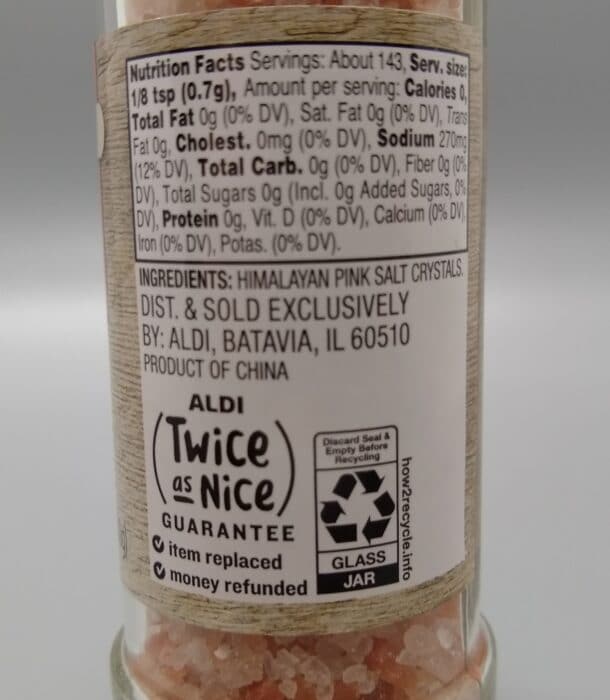 Peppercorn is a fruit that is ground up to make what we call black pepper. The difference is that with a grinder you do the grinding, while with ground pepper the work is already done for you. The argument is that peppercorns hold their flavor longer than ground pepper, since the flavor is still locked inside the peppercorn. Sure enough, when I compared the pepper from this grinder to the ground pepper in my pantry, there was a definite difference. Not only is the pepper from this grinder larger and coarser, but it has a much more distinctive pepper kick. 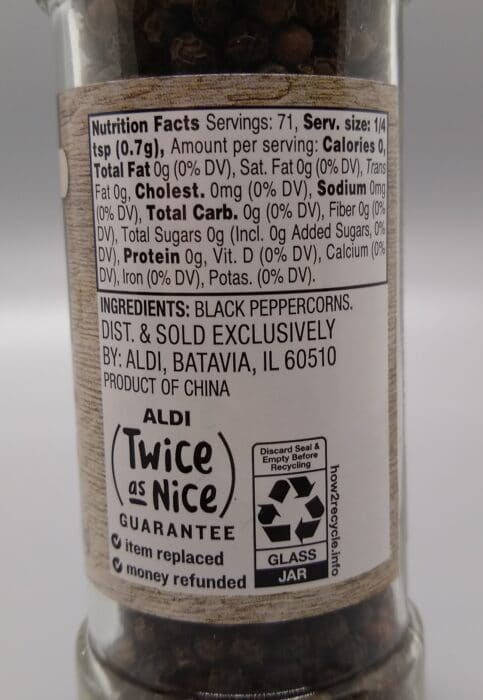 We really wanted to like these grinders. Unfortunately, a few weeks into use this happened to the pepper grinder: 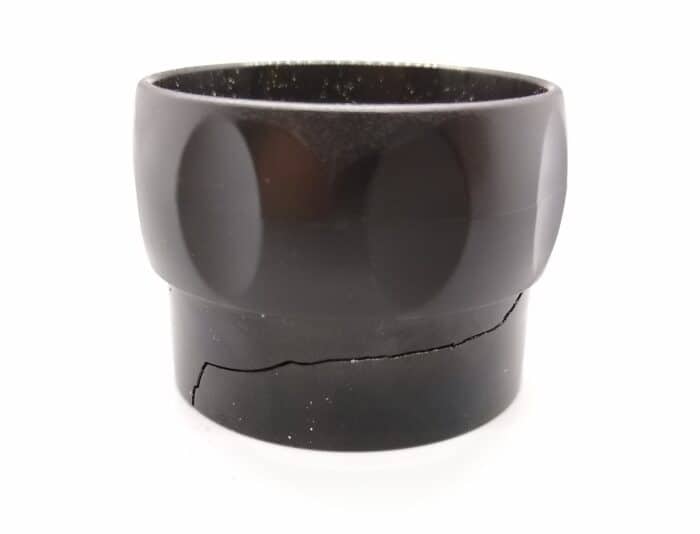 Our pepper grinder cap wasn’t up to the challenge.  (Click to enlarge.)

As you can see, our pepper grinder unceremoniously cracked while using it, and if I hadn’t reacted right away the entire container of pellets would have wound up in my dinner. It was disappointing, especially because a broken grinder cap means I have no easy way to grind out the rest of the pepper — probably 80-85% — still in the bottle.

Even more disappointing, a week later nearly the exact thing happened to one of the salt grinders. It cracked just like the pepper grinder did, rendering the jar useless. Two out of three broken in a few weeks is a pretty serious fail.

On paper, the Stonemill salt and pepper grinders from Aldi appear to be a nice option if you want to grind your own. The salts are both good as salts go, and the pepper is superior to pre-ground pepper. Unfortunately, we didn’t make it very far before the pepper cap and one of the salt caps cracked under normal use. The salt and pepper themselves are good, but until Aldi can sell more reliable grinders, we can’t recommend them. For now, stay away.