Cranberry in a can.

For some of you, this makes no sense at all. What is this cranberry in a can you’re talking about?

But for others, this is a staple of the holiday experience, one of the many anticipated delights of the Thanksgiving feast. It is that tart-but-sweet circular thing that is not quite gelatin, not quite sauce, but all parts excellence.

And Aldi carries it. Sometimes. 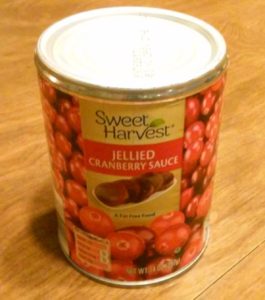 Sweet Harvest Jellied Cranberry Sauce is your typical “jellied cranberry sauce,” although anyone familiar with this stuff knows that “jellied cranberry sauce” is a misnomer. It’s more of gelatin, a kind of Jell-O, albeit one made out of cranberries. It’s firm enough that when you open the can, you can slide a knife around its perimeter and it will come out as a hilarious mold of the can it arrived in. It’s also firm enough to be sliced into circular medallions with a knife and further cut and eaten with a fork.

It’s equally hard to try and peg where cranberry sauce fits in the dinner spectrum. Although it’s sweet, it’s not quite dessert, as most families will serve, say, pie as their primary dessert. It’s not quite the typical dinner side, either, as it’s a sweet, not a starch or salad or any of the other things that typically round out a typical dinner plate. It might be best to say that it’s a sort of “pre-dessert,” a sweet compliment to the turkey and potatoes and green beans and other things that holidays are made of.

Aldi’s version of the sauce is like what you’d get anywhere else. The texture, the sweet-with-some-tart flavor, the glorious stuff that is processed and yet tastes so good … it’s all here.

Sweet Harvest Jellied Cranberry Sauce is exactly what fans of cranberry in a can would want: that sweet, tart jelly that cuts smoothly and rounds out any holiday (or non-holiday) dinner plate. Highly recommended.