If you hang out on social media fan pages for Trader Joe’s long enough, you’re likely to see some conversations about kringle. Kringle is a Northern European type of pastry. In Denmark, kringle features puff pastry or yeast dough with a filling, and it’s topped with sugar or icing.

This flaky, flavorful pastry is a hot seller at Aldi’s cousin. According to Trader Joe’s fans online, stores get limited supplies each day, and the kringle sometimes flies off the shelves so quickly that it may not always be in stock. I spotted some during a recent Trader Joe’s run and decided to see what all the hype was about. 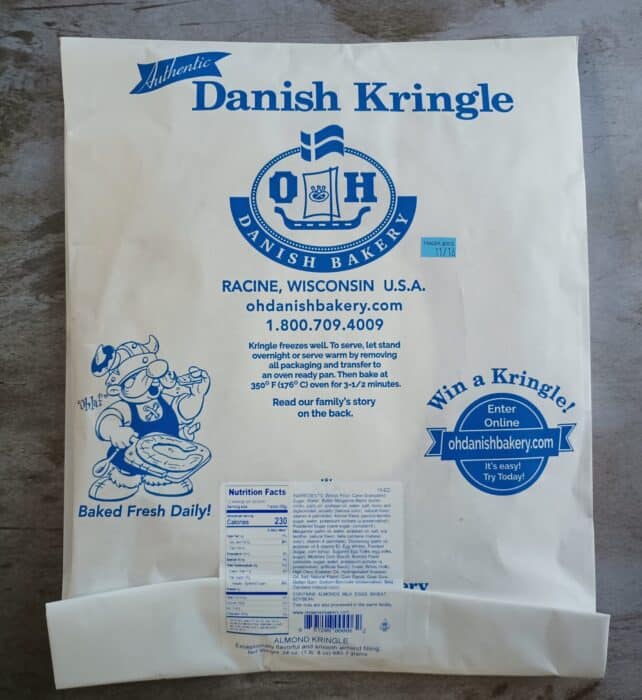 While Trader Joe’s primarily sells private label products under its own Trader Joe’s brand, this kringle is not actually sold under the Trader Joe’s name. Instead, it’s produced by the O & H Danish Bakery in Racine, Wisconsin.

O & H Danish Bakery is a four-generation family bakery that was established in 1949 by Christian Olesen. The family’s baking traditions originated in Denmark. Their Danish kringle appears to be their biggest claim to fame, but their website indicates they also make various cakes, pies, brownies, bread puddings, Scandinavian breads, and more. O & H Danish Bakery states their kringle takes three full days to make in order to get just the right flavor and light, flaky consistency. If you’re feeling lucky, you can enter to win a kringle on the bakery’s website, with winners picked weekly.

O& H Danish Bakery’s kringle comes in a couple dozen flavors, including almond, apple, cherry, birthday, cream cheesecake, pecan, raspberry, and many more. However, Trader Joe’s appears to stock one flavor at a time, and flavor availability at Trader Joe’s seems to be seasonal. According to TJ’s fans online, pecan kringle is stocked in January and February, raspberry in April and May, cheesecake from May through August, pumpkin in September and October, and almond in November and December.

The kringle I picked up in November, then, was almond.

This kringle costs $8.99 for a 24-ounce package at Trader Joe’s at the time of publication. Kringle ordered directly from O & H Danish Bakery costs at least $24 each plus shipping (more on that in a bit), so you’re definitely getting a deal at Trader Joe’s. 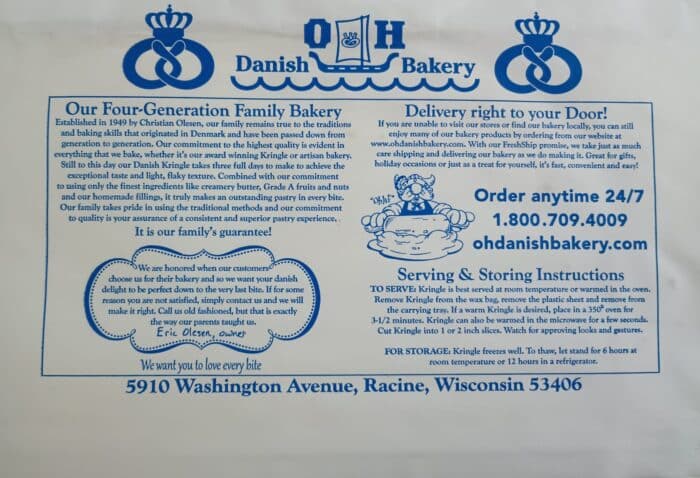 This kringle is sold inside a large sealed paper envelope. It’s a large circular pastry with icing on top, and it can be cut into smaller slices to serve.

The front of the package states that kringle freezes well if you don’t intend to eat it right away. If you freeze it, just let it stand overnight to thaw, or serve warm by removing all packaging and transferring the kringle to an oven-ready pan. Then bake at 350 degrees for 3.5 minutes. 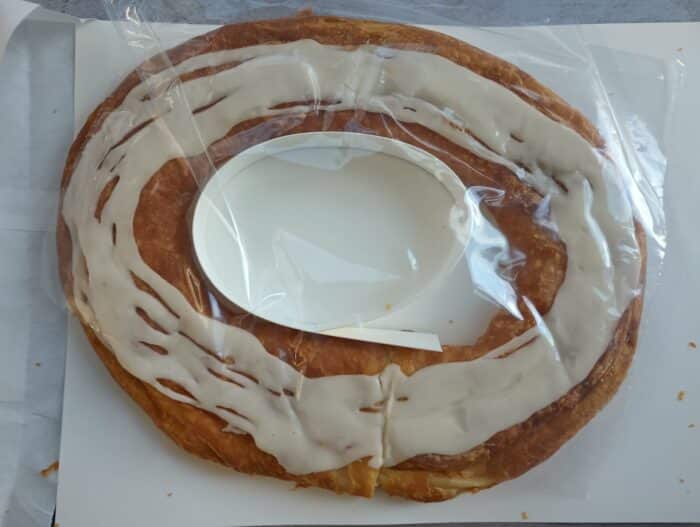 What the kringle looks like when you pull it out of the paper envelope. It’s sitting on a cardboard try and has a plastic cover.

The back of the envelope has additional information on storing, heating, and serving. It states kringle is best served at room temperature or warmed in the oven, following the instructions above (being sure to remove the wax bag, plastic sheet, and carrying tray before placing the kringle in the oven). Kringle can also be warmed in the microwave for a few seconds. To serve, cut the kringle into 1- or 2-inch slices and “watch for approving looks and gestures.” The back of the envelope also has more detailed instructions for thawing a frozen kringle, noting that it can be thawed at room temperature for 6 hours or in the refrigerator for 12 hours. 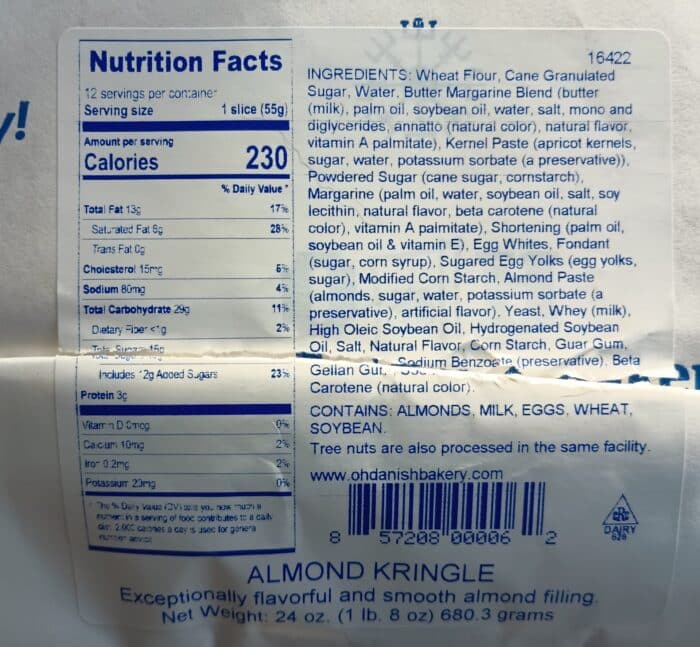 If you’re watching out for allergens, the almond kringle contains almonds, milk, eggs, wheat, and soybean. Tree nuts are also processed in the same facility. 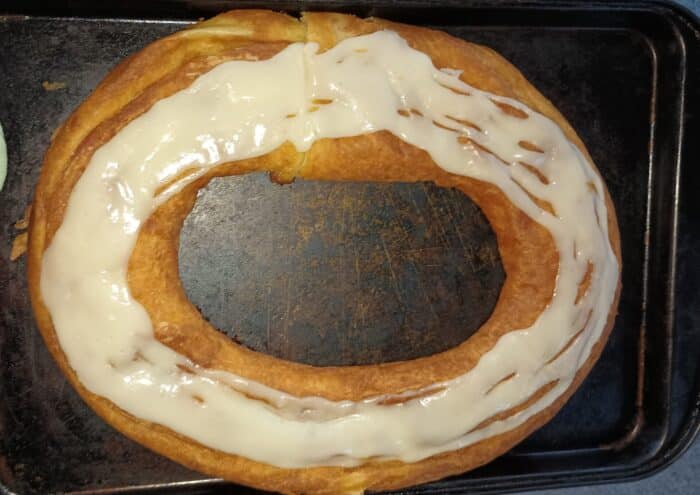 After heating in the oven.

I placed our kringle on a baking sheet and heated it in the oven for a few minutes, then served it alongside some mugs of hot tea. This made a nice treat on a chilly fall afternoon. 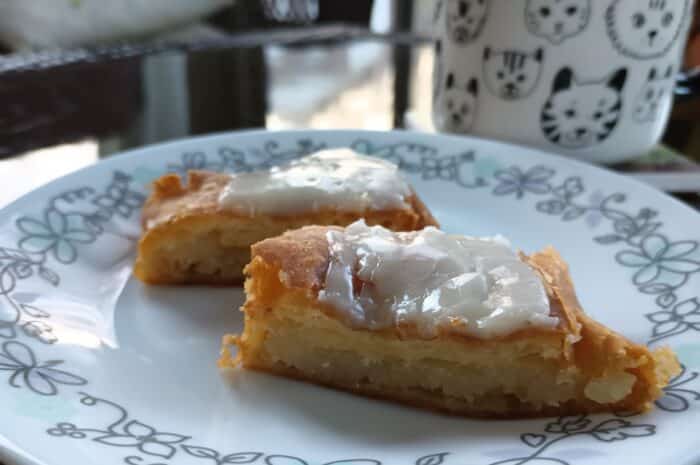 The almond paste filling is smooth and rich, and this is overall a very sweet dessert. Some family members didn’t care for the almond filling, so I might have to look for other filling flavors later at Trader Joe’s. 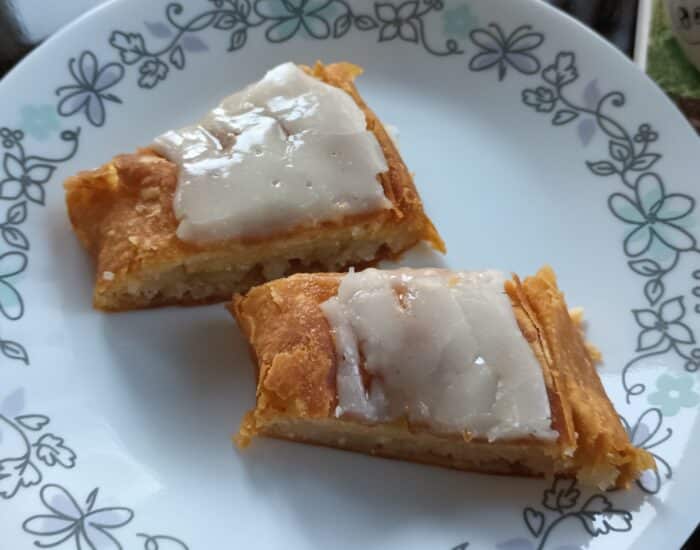 I found myself cutting off small slivers every time I passed through the kitchen. Some Trader Joe’s customers suggest cutting the entire kringle into individual servings and placing them all in a freezer bag or freezer-safe container, and then taking out and thawing servings as desired. I ended up doing that so we can enjoy the rest of our kringle later. 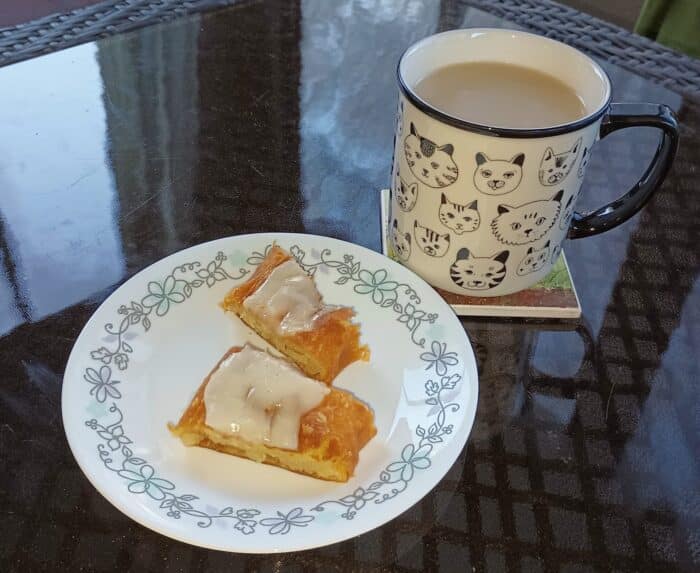 One final note: if you can’t find this kringle at Trader Joe’s, or if you want a specific flavor, the package has information on how you can order online directly from O & H Danish Bakery, or you can order by calling the bakery at 1-800-709-4009. Shipping in most of the U.S. costs a flat rate of $9.99. (It costs more to ship to Alaska and Hawaii.) Kringles ordered online directly from O & H Danish Bakery cost $24 each for everyday flavors (with a slight discount if you order two) and $26 each for seasonal flavors. So you’re certainly getting a better deal buying them from Trader Joe’s, and if they’re quick sellers at TJ’s, I’m not sure you’re losing much in terms of freshness.

Authentic Danish Kringle at Trader Joe’s is made by O & H Danish Bakery in Racine, Wisconsin. This traditional Northern European dessert features flaky pastry with a rich filling. The kringle we tried had almond filling, but other kringles that Trader Joe’s stocks at different times of year have flavors such as cream cheesecake, pecan, pumpkin, and raspberry. If you enjoy quality baked goods, keep an eye out for this the next time you’re at Trader Joe’s. Just keep in mind that they are popular and sometimes TJ’s sells out.