One member of my family, who I will not name, is a burrito fanatic. This person would devour an entire bag of Aldi frozen burritos if we let them. This person loves heaping cheese, sour cream, and copious amounts of salsa on those burritos, cutting them up and eating the whole glorious mess at lunch.

As a result, we limit the amount of frozen burritos in our home.

A while back, we were at the distant cousin of Aldi, Trader Joe’s, when we spotted … frozen burritos. And of a different kind. So we grabbed them to bring them home and try them. 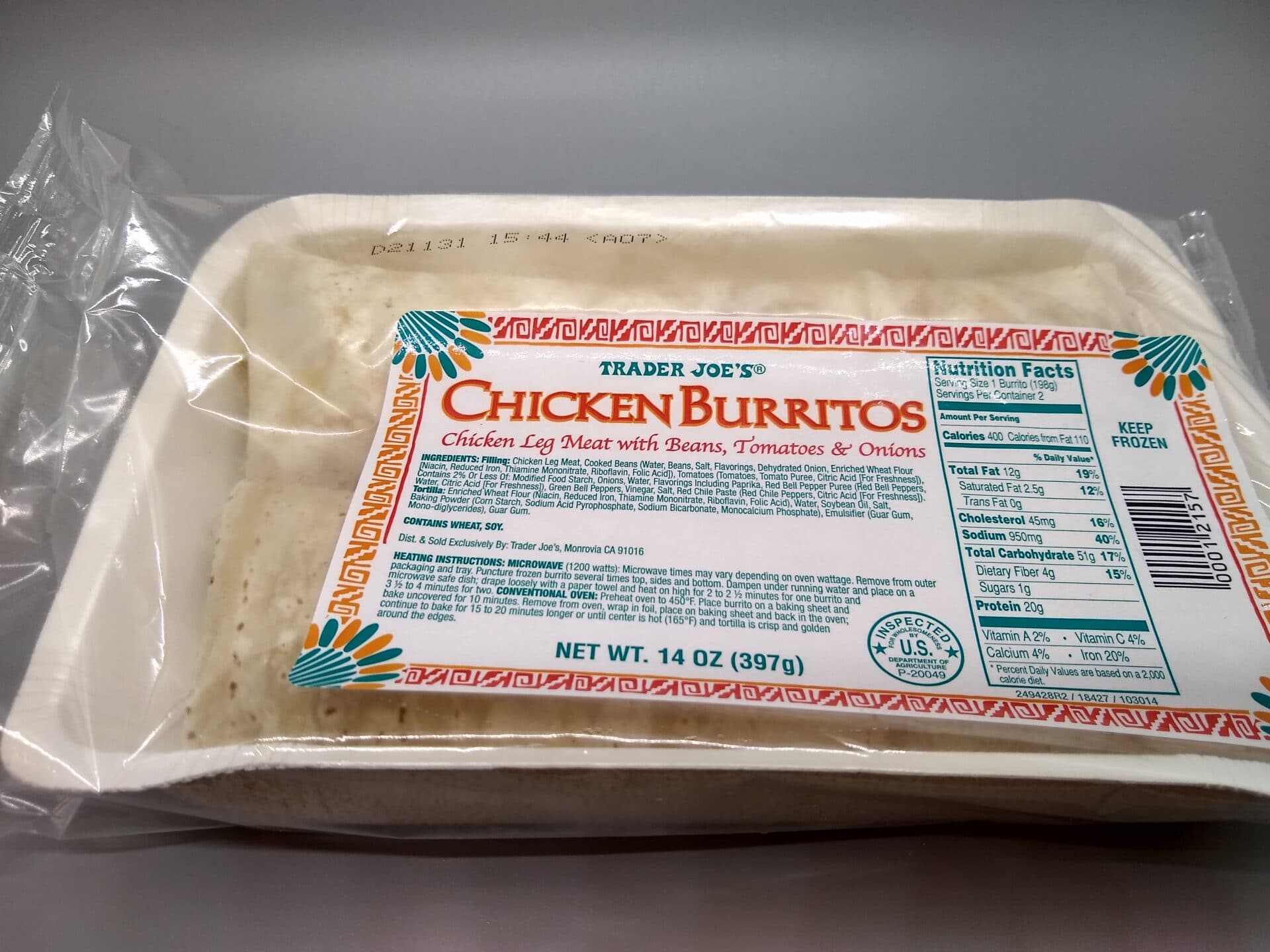 Trader Joe’s Chicken Burritos can be found in the store’s frozen section for $3.29. The package contains two burritos for a total of 14 ounces. That comes out to about $1.65 a burrito or 24 cents an ounce. According to the package, it contains “chicken leg meat with beans, tomatoes & onions.”

The cooking instructions are among the more unusual I’ve ever seen for a frozen product. To heat in a microwave, you first remove one or both of the burritos from the packaging. Next, you puncture the frozen burrito(s) several times on the top, side, and bottom. After that, you dampen them under running water and place on a microwave safe dish, draping loosely with a paper towel. Finally, you heat them on high for 2 to 2 1/2 minutes for one burrito or 3 1/2 to 4 minutes for two burritos.

To heat in an oven, you preheat the oven to 450 degrees. Next, place the burrito on a baking sheet and heat uncovered for 10 minutes. Then, remove the burrito from the oven, wrap in foil, place on the baking sheet, and put it back in the oven, baking for 15 to 20 minutes longer or until the center is hot (165 degrees) and the tortilla is crisp and golden around the edges.

I went for speed, so I microwaved it.

It came out … fine. Microwaving can make flour tortillas tough, but I was able to cut and chew it without trouble. The more meh part was the insides. There are plenty of spices and such in the burrito, but because it’s frozen, it’s mostly a mush with some meat chunks in it. There isn’t a lot of texture to the beans, tomatoes, or onions that are reported to be in this product. To be fair, the taste was decent.

As a frozen product, it’s processed, with a handful of unintelligible ingredients, and each burrito has its share of fat, carbs, and a lot of sodium. Each burrito also has 400 calories. 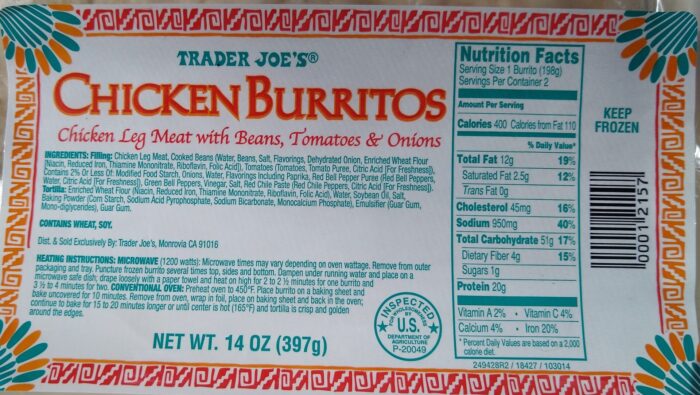 Trader Joe’s Chicken Burritos are a mixed entrant in the frozen burrito category. Making one of these is more of a chore than your average frozen burrito, and the payoff is a meal that has decent taste but pretty typical frozen-food texture. Add in the fact that they’re not cheap — about $1.65 a burrito — and each contains 40% of your daily allowance for sodium, and this isn’t a real compelling purchase. If you love chicken burritos or burritos in general, this might be worth a flyer, but I don’t plan on making it a routine purchase.