A few years ago, our family had the opportunity to visit the Keenland Track Kitchen, a dining establishment nestled in a sprawling complex in Lexington, Kentucky. Keenland is a home to a popular horse racing course, and the Track Kitchen often serves horse workers and owners coming through for breakfast or lunch. It’s open to the public, too, which is how my family found ourselves sitting at a booth among the horse racing crowd.

The food was fabulous, but a personal favorite was a substantial breakfast burrito, which was stuffed with meat, potatoes, eggs, and other assorted goodies. It was no little McDonald’s burrito. I’d long been experimenting with my own homemade breakfast burritos, but this visit encouraged me to up my game. I’ve since added more things to my made-at-home version, but I’m also always on the lookout for store-bought takes on the breakfast favorite. I’ve sampled a chicken burrito from Trader Joe’s, for instance. And I recently spotted a limited buy breakfast burrito version on Aldi shelves. 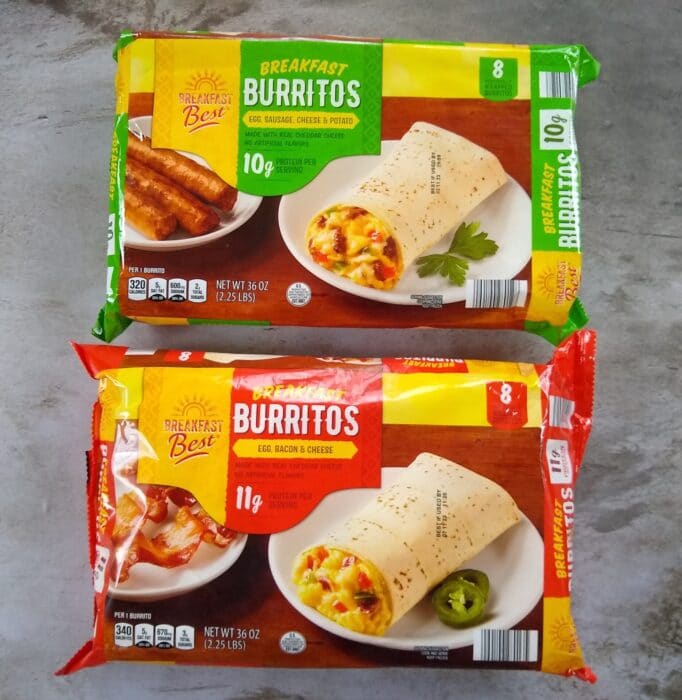 Breakfast Best Breakfast Burritos are an Aldi Find, which means they’re only in stores for a short time. Once they’re gone, they’re gone, and won’t return unless Aldi decides to bring them back. We found them in the store’s Aldi Find frozen section. At the time of purchase, we paid $6.99 for a package of 8 burritos, or about 88 cents a burrito. I don’t think that’s excessive for a premade heat-and-eat product, but you can definitely do cheaper if you’re willing to make them yourself.

While I can’t prove it, these almost feel like a backdoor pilot for a possible future Regular Buy, something Aldi is known to do from time to time. Time will tell.

When we saw the burritos, they came in two varieties: 1) egg, sausage, cheese, and potato and 2) egg, bacon, and cheese. We tried out both of them.

Both heat the same way and can be cooked either in the microwave or the oven.

To cook in the microwave, you remove the burrito from the plastic wrap, wrap it loosely in a paper towel, and then cook it on a microwave-safe plate. The instructions call to cook one burrito for one minute, and two burritos for one minute and 30 seconds.

To bake them in the oven, you first preheat the oven to 350 degrees. Next, remove the burritos from the plastic wrap and place them on a baking sheet, with at least one inch between each burrito. You can bake up to eight at a time, which is the entire package. They cook for 30 minutes, and then you remove them and let them sit for two minutes before serving.

We figure most people will microwave them, so that’s what we did.

We cooked two and discovered that the listed one and a half minutes for that number of burritos wasn’t enough. If we had it to do over again we’d probably microwave them longer. Just be aware that your cooking time may vary. 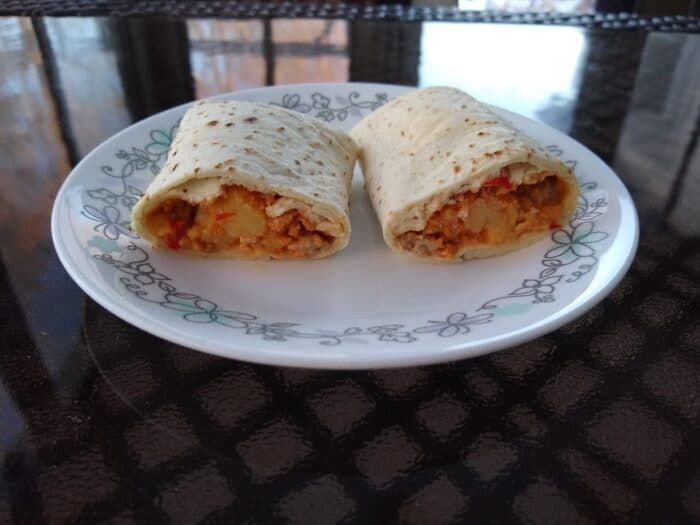 This burrito was pretty good. One of our tasters didn’t think the sausage was very visible but the taste was there, while another taster found an adequate number of small pieces of sausage in their burrito. The sausage flavor was complimented nicely by the other ingredients. I thought the potatoes — a component I like putting in my own breakfast burritos — were a nice accent. It was definitely a processed burrito, not a fresh one, but as processed burritos go it was solid.

Nutritionally, I would expect a lot of fat, sodium, carbs, and a lengthy ingredients list, and that’s exactly what I got. On the allergen front, these contain egg, milk, soy, and wheat. 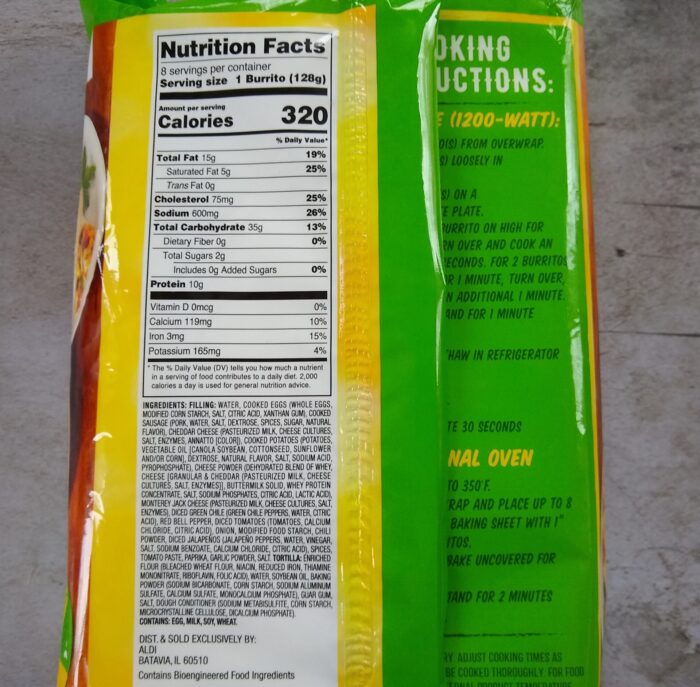 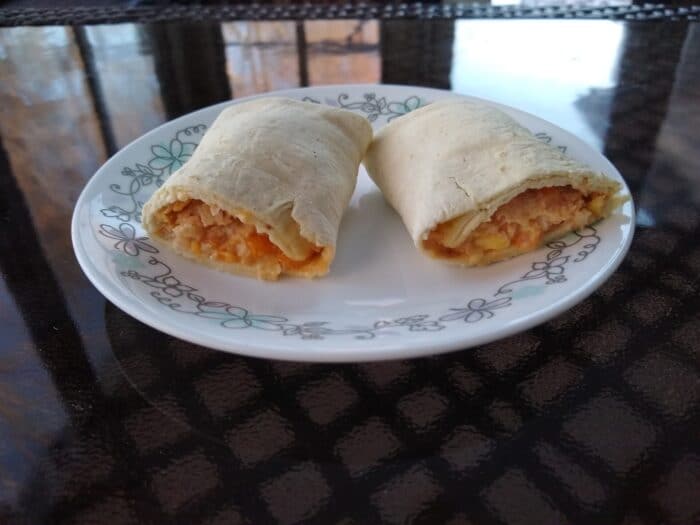 We did not like this burrito quite as much. It was fine, but it doesn’t have the same substantial filling, probably because of the absence of potatoes. The eggs are a bit of a mush and the bacon can be tasted but is otherwise invisible. One of our tasters said these had a noticeable smoky flavor, and smoke flavoring is listed as one of the ingredients. This isn’t a bad burrito, but if we had to choose, this would be our second choice of the two types of burritos. 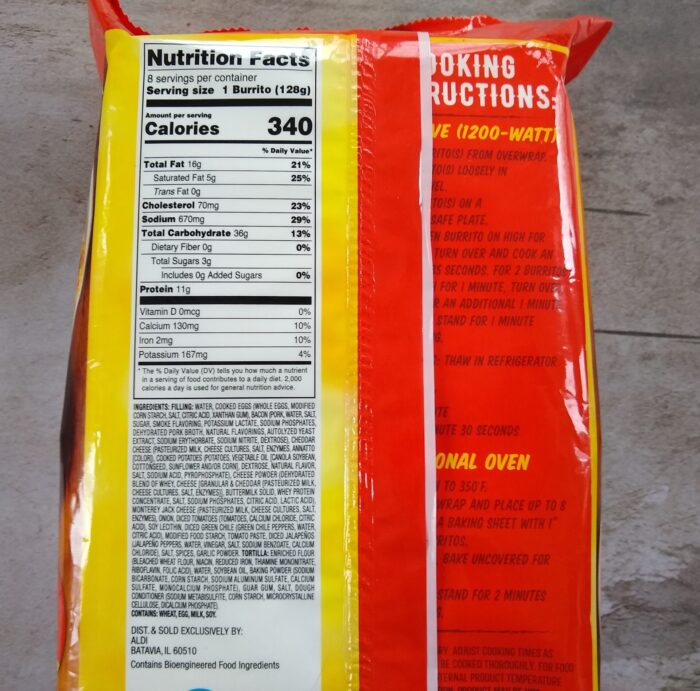 Breakfast Best Breakfast Burritos are a solid, if unspectacular, way to get a breakfast burrito. They are easy to make, although we needed more time in the microwave than was advertised. The Egg, Sausage, Cheese, and Potato version was our favorite of the two. Both are processed and you can do better on your own, but for a quick fix these work. I’ll be interested to see if these come back and if they — like the regular frozen burritos — become a frozen food staple at Aldi. We’ll see.