If you want me to impulsively buy food not on my shopping list, just make it almond-flavored. Sweet or savory, I love almonds and any food made with almonds. So even though I wasn’t planning on buying cereal on a recent trip to Trader Joe’s, I couldn’t resist picking up a box of Trader Joe’s Crunchy Almond Butter Puffs Cereal. 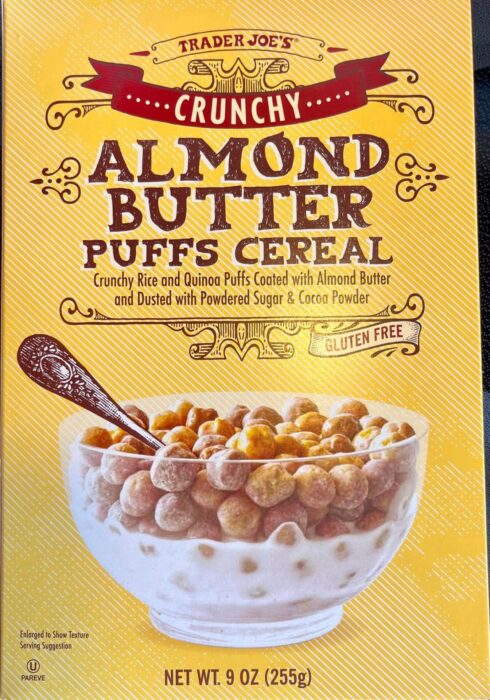 I did pause long enough to check the nutrition label, because I try to avoid cereals that are high in sugar. One cup of Trader Joe’s Crunchy Almond Butter Puffs Cereal contains 200 calories, 10 grams of fat (1 gram saturated), 0 mg of cholesterol, 20 grams of carbohydrates (2 grams of fiber and 6 grams of sugar), 6 grams of protein, and small amounts of calcium, iron, and potassium.

The first ingredient is almond butter, which explains why it’s high in calories and fat. The rest of the ingredients are (in order), rice flour, quinoa, brown sugar, powdered sugar (sugar, calcium phosphate), sunflower oil, cocoa processed with alkali, salt, cassava starch, and mixed tocopherols (preservatives.) It’s gluten free but contains nuts (almonds). The package does not note any other allergens.

Although it’s pretty calorie-heavy for cereal, I thought the high protein and relatively low sugar quantity made it an okay choice for breakfast or a snack. I bought one 9-ounce package for $3.49, which is about 38 cents per ounce. That’s higher than most of Trader Joe’s house-brand cereals but not unreasonable for a better-quality cereal.

The box is about the same size as a small box of Cheerios. However, when we opened the box, we noticed that the bag inside was at least a third smaller than its box.

Cereal often settles during shipping, so it’s normal to open a box of cereal and find the top of the bag empty after settling. But finding a bag much smaller than its outside box feels like deceptive packaging. My kids opened the cereal and immediately expressed disappointment over the quantity. 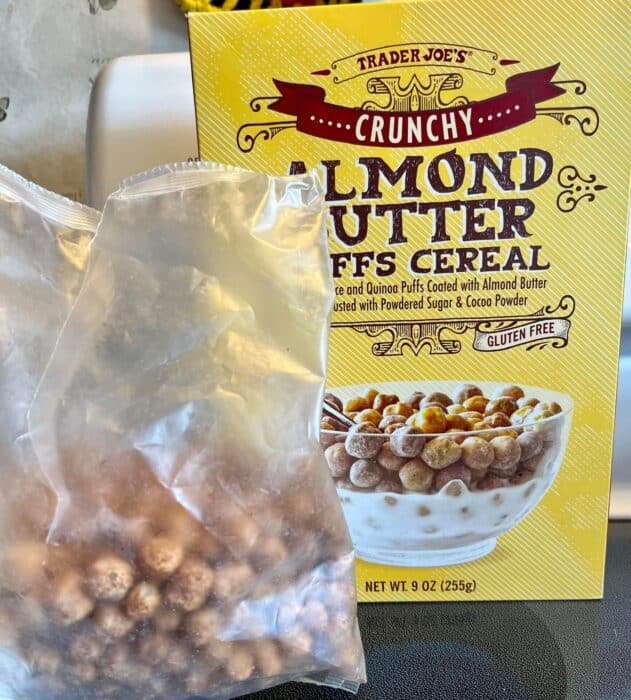 Note how the bag is smaller than the box.

We quickly got over our disappointment about the quantity when we tasted the cereal: it tastes like lightly sweetened cardboard.

The cereal advertises “Crunchy rice and quinoa puffs coated with almond butter and dusted with powdered sugar and cocoa powder.” Technically, that’s correct, according to the ingredients anyway. But you’d never know it from the taste alone.

Despite almond butter being listed as the first ingredient, you can barely taste it. It’s as if they wanted to make an almond butter cereal but were afraid no one would like the taste, so they kept it as bland as possible.

I’ve had quinoa many times, and it’s mild, chewy, and slightly nutty, like brown rice, but with a characteristic earthiness. I couldn’t taste anything distinctively “quinoa” in this cereal, though. To be fair, there is a slight toasty flavor, but it’s very slight. Mostly the flavor is “generic, bland carbohydrate,” so it’s closer in taste to a paper product than food.

None of us detected any cocoa flavor either. It is mildly sweet, but that’s really the only distinct flavor coming through.

The puffs are very, very crunchy and feel more like they have a solid sugar coating than a “dusting of powdered sugar.” The surface is coated so thickly that milk doesn’t soak into the cereal at all. I like my cereal to absorb at least some of the milk, but this stayed as crunchy and unsettlingly dry as a bowl of Captain Crunch.

My kids like crunchier cereal than I do, but even they thought it was weird that the cereal and milk stayed entirely separate. If the puffs could absorb milk, it would add a little needed flavor, but no.

Food preference is very individual, and I’m sure there are people out there who love small quantities of very bland, disturbingly non-porous cereal. My kids and I are not among them. I don’t recommend this cereal to anyone who likes flavor, almonds, cocoa, quinoa, or cereal that absorbs even a small amount of milk. Or anyone who expects food packaging to accurately reflect the amount of food in the box.