Trader Joe’s, Aldi’s distant cousin, sells a small but decent selection of meat. I often cook with ground turkey as a substitute for ground beef and decided to give the Trader’s Joe’s ground turkey a try. 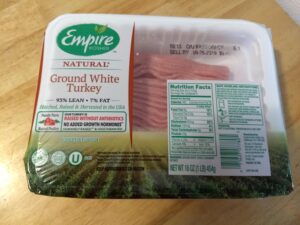 It’s advertised as minimally processed with no artificial ingredients and is 93% lean with 7% fat. The package states the turkeys are hatched, raised, and harvested in the U.S. on family farms. It says they were manufactured by Empire Kosher Poultry, Inc., in Mifflintown, Pennsylvania, and it provides a phone number to call for recipes or information: 800-367-4734.

The ground turkey is certified kosher, and the package states the turkeys were raised without antibiotics and were given vegetarian feed (although turkeys are actually omnivores and appreciate some meat such as insects or worms).

The package also states — as do many other poultry processors — that the turkeys were raised without growth hormones, although federal regulations prohibit the use of added growth hormones in poultry, so that statement is not necessary and is a bit misleading.

The package also says the turkeys are “humanely raised” and that they meet “Empire Kosher’s humane policy for raising turkeys on family farms in a stress-free environment.”

Where Does Trader Joe’s Ground Turkey Come From?

Trader Joe’s ground turkey is from Empire Kosher, which, according to Wikipedia, is the largest producer of kosher poultry, beef, lamb, chevon (goat meat), and venison in the world. Their headquarters, hatchery, and processing facility are in Mifflintown, Pennsylvania. The company was founded in the 1930s in New York and relocated to Pennsylvania in the 1960s.

Wikipedia also states Empire processes 240,000 chickens and 27,000 turkeys each week, with an annual revenue of more than $100 million, which makes it the biggest kosher poultry producer in the U.S. Its workers are unionized and are members of the United Food and Commercial Workers Local 1776.

According to Wikipedia, Empire Kosher’s products are sold at chain grocers across the U.S., including Trader Joe’s, Safeway, and Giant, as well as many Costco stores. Its Kosher Valley product line is sold exclusively at Whole Foods.

Empire Kosher’s website states, “Our turkeys are humanely raised on family farms, and cared for by experienced farmers who follow our strict standards for animal welfare. Our turkeys have a stress-free environment in well-ventilated barns.” Their website also states that all of their poultry are raised within a 100-mile radius of their facility in Mifflintown, Pennsylvania.

Their website’s FAQ page states their poultry are “free roaming.” This does not mean free range, in which animals are allowed to roam outdoors. Instead, Empire Kosher’s free roaming poultry “are allowed to walk and roam freely inside houses.”

In other words, they are allowed to walk around in large barns and are not kept in cages.

In researching the company, I also came across an an eight-year-old article that offers a peek into how the company operates. While this review deals with Empire Kosher’s turkey, one interesting piece of information is that Empire Kosher’s chickens are not bred to have such large quantities of breast meat compared to other processors. That’s because, according to the article, large breasts can add extra weight that damages the chicken’s tendons and renders them unkosher when they are slaughtered. A company official said they worked to develop the breed specifically so it could be kosher.

The same article states that while farmers in the area raise the chickens, Empire Kosher monitors their housing and provides all of their feed. According to the article, over one third of the farmers who raise Empire Kosher’s chickens are Mennonites. Also, the rabbis who work at the plant live in on-site dormitories but spend the weekends at home with their families, and the assembly line does not operate on Fridays so they can get home in time for Shabbat.