Years ago, I transitioned to a rotary shaver from a foil shaver. (I’d previously experimented with disposable razors, but after countless cuts, I decided to follow the lead of my grandfather. If he — a World War II Navy combat pilot — could use an electric razor, so could I.) I found that I liked rotary shavers more than foil ones for their ability to get into tight spaces, especially along the neck and chin.

Rotary shavers, though, are a racket. The shavers themselves aren’t always expensive — you can find them for $30 — but where you really get gouged is the blades. Those little round things wear out after 12-18 months, and when you shop for replacements, you quickly discover that they aren’t cheap. There have been instances where I’ve paid as much for the replacement blades as I did for the razor.

Back in 2017, Aldi sold its first ever rotary shaver, and I had to admit I was intrigued. How would it work? Could it compete with a name brand razor. And, most importantly … would I have to overpay for replacement blades?

It ended up being a good news-bad news situation. The shaver was competent enough, but when it came to blades … well, the company didn’t sell any, and there was no way to get more, not even through the warranty process.

Two years later, I was in the Aldi center aisle when I noticed the Visage rotary shaver was back on shelves, and it looked a little different. I decided to give this new model a try, wondering if, like the old Visage razor, I’d have to live with not being able to replace the blades.

Turns out, things are different this time. 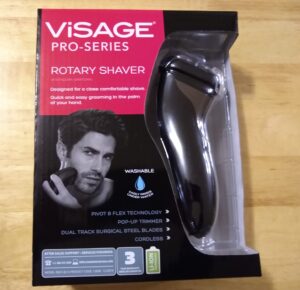 The Visage Pro-Series Rotary Shaver is an ALDI Find, which means it’s only around for a short time. In 2019, the shaver retailed for $14.99. I’ve bought rotary shavers for years, and I almost never see shavers anywhere close to this price point, not even during sales. On a rare occasion, I might see a budget shaver for $20, but even then it usually doesn’t have the features this one does. Of note, the 2017 Visage shaver was $19.99, so this is actually cheaper than the version from years past.

The razor has a 3-year warranty. The warranty is serviced by Tempo USA, a common Aldi warranty provider and the same company that serviced the old rotary shaver. More on this later.

The rotary shaver comes with the following: 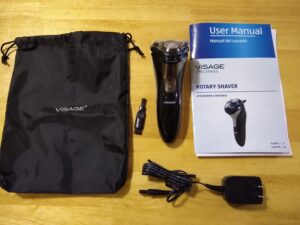 This is a budget shaver, so you figure it probably doesn’t buy your groceries or drive you to the doctor. Still, it does have a nice suite of features, even for the price. 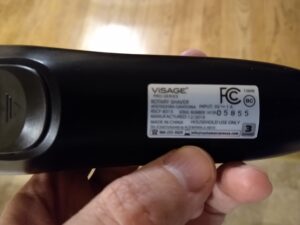 The fine print on the back of the razor. (Click to enlarge.)

For one, it’s washable. You can run the heads under water (I recommend hot water) to rinse the shavings out. I’ve had budget razors that aren’t washable and I’ve come to the conclusion that this feature is a must-have for me. The convenience of being able to rinse things out, rather than fiddle with the mess of brushing it out, is worth it.

Second, it has a pop-up trimmer. Again, I’ve had budget razors in the past that did not. It’s a useful thing to have.

Three, it operates on a universal power supply. That means you can take it overseas and use it if you need to. You’ll still need an adapter to fit plugs in other countries, but in terms of drawing the power itself, this will do it. This is a pretty common feature on shavers, but it’s still worth mentioning. 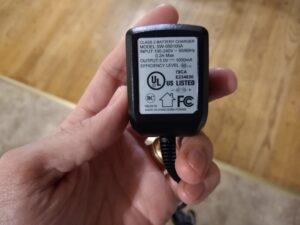 I’ve used a number of rotary shavers over the years — most of them budget models — and I currently have in my possession both a low-end Phillips shaver and the 2017 Aldi shaver. 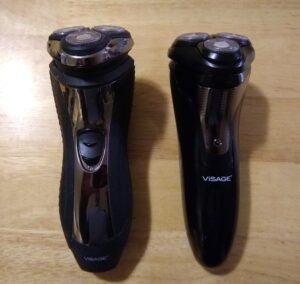 One thing that really stood out to me about the 2019 Visage is how it had a smaller form factor than the older model. This, to me, is a big plus. The old one was a bit bulky; the new one feels closer in form to the ones I’ve gotten elsewhere.

On the other hand, while the 2017 Visage had a flexible neck, the 2019 does not. I should add that both of them have a flexible blade housing — if you press in the space between the blades it bends in — but the 2017 also had a neck that moved a little. This is a feature I’ve seen in higher-end rotary shavers, and it’s a bit of a shame that the 2019 Visage doesn’t have it. Still, this is consistent with brand-name budget shavers I’ve owned, so a flexible neck isn’t something I’d expect, much less on a $15 shaver. 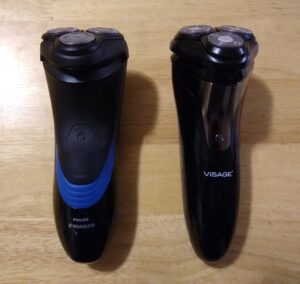 Side by side with my budget Phillips rotary shaver.

I found the 2019 Visage to be a lot like my budget Phillips in terms of form factor.

To test the razor, I first recharged it. The charger has an off-white charging light that comes on when you plug it in, and the icon changes when fully charged — a small but nifty little feature. From there, it’s just a matter of removing the cap and pushing the power button. 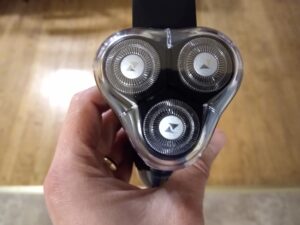 The 2017 Visage was a bit on the loud side. The 2019 Visage seems a little quieter, in keeping with other razors.

I can’t speak to everyone’s experience, but I found there was a bit of a break-in period on the razor. My first attempt didn’t go all that well: in fact, it was so mediocre I had to use my Phillips to finish things up. It left me wondering if this razor could do the job. Fortunately, subsequent shaves have gone much better. The morning I finished this post, I shaved and it gave a shave pretty comparable to my Phillips razor, which has recently replaced blades.

On the subject of replacement blades: as I mentioned earlier, the 2017 razor did not sell replacement blades, nor could you get new blades through any kind of warranty. However, this new razor is something different. In the middle of the manual, there is an order form for a few replacement parts.

You can find a printable PDF of the replacement parts by using the link below. 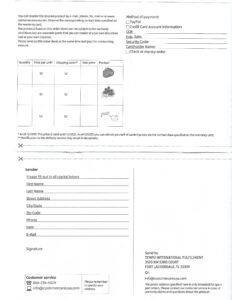 The prices listed on my order form say they are good until December of 2022, meaning this offer is good for about 3 years from the date of purchase. After that, users can contact Tempo for updated price information.

I have to say that I’m pretty impressed with what Aldi has done with the new Visage Pro-Series Rotary Shaver. With a $15 price tag, a nice feature set, and the ability to order replacement blades for just $7 shipped, I’m not sure you can find a better value for a rotary shaver anywhere. While I had some initial concerns as I broke in the blades, the shave has gotten better with each use, and it now seems to cut pretty similar to other budget rotary shavers I’ve used. If you’re a rotary shaver user, this is definitely worth a look.