French fries are an American institution, right alongside burgers and hot dogs. In fact, they often are found alongside burgers and hot dogs, the classic side item to a classic meal. Just about every grocer sells some variation on French fries, from national brands to generic store-specific labels. That includes Trader Joe’s distant cousin Aldi, which sells some pretty mean fries of its own.

Trader Joe’s has its own take on the classic fry, too. 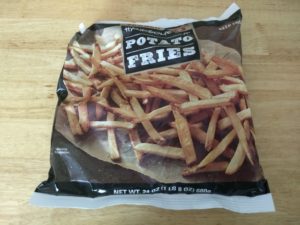 Trader Joe’s Handsome Potato Fries come in a 24-ounce frozen bag. At the time of this post, the bag ran $2.49, or just over 10 cents an ounce. While that runs higher than, say, Aldi fries, it’s cheaper than national brand fries.

The instructions come with one method, oven preparation. (It might be possible to deep fry them, too, but you’d have to experiment with that.) To bake, you first preheat the oven to 425 degrees. Then, you place the fries in a single layer on a nonstick baking sheet, baking for 14 minutes. The instructions do not call for flipping the fries, unlike some frozen French fries.

The packaging warns that, because these fries are made from potatoes and not much else, they taste a little different from a lot of other kinds of fries. They’re right … and these fries are good. I’ve made home-made fries before, which are generally less crispy but have a great potato flavor, and the TJ’s fries are just that. They’re not as crisp as some fries (something that might be different if a deep fryer was used) but the texture has a great potato feel, and the taste is excellent. They go great with ketchup, although I just added a bit of salt.

Nutritionally, these are made with just four ingredients: potatoes, oil, salt, and dextrose (corn). They do have, by nature, a fair amount of carbs, fat, and sodium, so they’re not an anytime food, but I have to admire their simplicity. 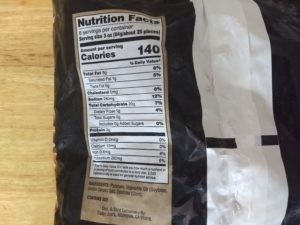 Trader Joe’s Handsome Potato Fries are a great classic in the tradition of hand-cut potato fries, with a nice taste and good potato texture. They’re also easy to make and reasonably priced. Recommended.