During a recent foray to Aldi’s distant cousin, I took note of some of the quick-serve frozen dishes there. Trader Joe’s likes to stock easy-to-prepare dishes in their chest freezers, and when I saw that chicken quesadillas were among them, I figured they were worth taking for a spin. 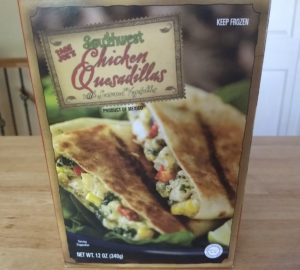 Trader Joe’s Southwest Chicken Quesadillas (“with seasoned vegetables,” the package adds), comes in a box in the freezer section. At the time of this post they ran $3.99 for a 12-oz. box. Since the box contains two quesadillas, that’s about $2 a quesadilla. It’s not restaurant prices, but it’s a bit of money, even for a prepared frozen food.

The quesadillas can be prepared in a few different ways. In all instances, the instructions note that the internal temperature should be at least 165 degrees.

One method is the microwave, with instructions specific to a 1200 watt model. This method involves wrapping the quesadilla in a paper towel, placing it on a microwave safe dish, and cooking it for 3 minutes at 50% power. Then, you flip the quesadilla, push down on the center of it (it will be somewhat hot, so a spatula works well for this), and close the microwave (presumably removing your hand first) and cooking an extra 1 minute on high. At this point, you let it rest in the microwave for 1 minute and it’s done … unless you want a crisp finish, in which case there is an additional step: placing the cooked quesadilla in a non-stick skillet with 1-2 tablespoons of vegetable oil or butter and crisping on both sides on medium heat until the outside is golden.

A second method is the stovetop. This involves either first 1) defrosting in the fridge or 2) placing in a steamer or heat-proof plate fitted inside a pot with a lid for 5 minutes on each side. Once defrosted, then you heat a non-stick skillet to medium-low with a teaspoon of butter or cooking oil, then crisp the quesadilla for 2 minutes on each side, being sure to press down on the center of the quesadilla with a spatula after flipping. Once it’s golden brown, let it rest for a minute before serving.

The final method is the oven. To bake, preheat the oven to 375 degrees, wrap the quesadilla in foil, and place on a baking sheet. Next, cook for 20 minutes, then flip and continue to cook for 15 more minutes. Once you remove it, let it rest for 2 minutes before unwrapping.

I was surprised how relatively complicated each method was, especially if you wanted an ideal product. The oven instructions are arguably the most straightforward, but they also take at least 35 minutes, which is an awfully long time. The stovetop doesn’t seem much better, especially if you have to defrost the quesadilla overnight in the fridge. We went ahead and did the microwave instructions and opted to finish the preparation process by crisping them briefly in a skillet, and while they do take a few steps, the quesadillas did turn out crisp.

In terms of taste, they’re not bad. The flavor is certainly there, with a mix of spices, and the mild-to-medium heat level gives them just a little kick. It also has cool grill lines, too, if that matters. 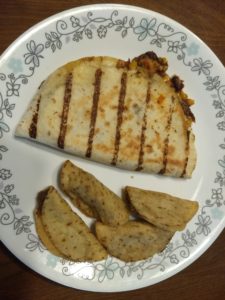 As for texture? Well, as much as the picture on the box showcases giant chunks of chicken, the actual product is more of a taco-flavored mush of chicken shreds and other ingredients. This is probably to be expected for a processed frozen food, but suffice to say that what you see on the box is not quite what you get.

Because it’s a processed food, you’d probably expect it to be high in fat and sodium. You’d be right. 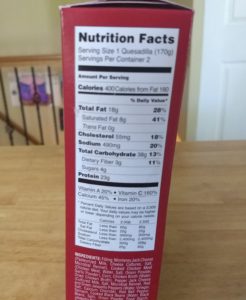 The nutrition section also warns that the product contains milk and wheat, and declares it to be a product of Mexico.

Trader Joe’s Southwest Chicken Quesadillas are a decent frozen food. The taste is good, and with proper preparation these have a nice crisp exterior. The interior is more of a mush than the picture on the box indicates, however, and from a sodium and fat perspective these aren’t healthy at all. They’re also a little bit more of a chore to prepare than I’m used to with frozen foods. At $4 for a box of two quesadillas, each one of them is a $2 proposition. For all those reasons, they’re probably not an ideal anytime food, but if you need something in a pinch these might be worth a look.