My daughters and I love macarons. From their crispy outer crusts to their soft and chewy centers, these French treats that look like little sandwich cookies come in a variety of flavors to satisfy almost any taste preference, and they are a delightful dessert.

Macarons can be challenging to make at home, though. They are composed of the outer shells and the filling, and friends who have attempted to make them have described the efforts they went to trying to bake the shells so they turn out just right: perfectly round and with a ruffled edge or “foot.”

So instead of making macarons myself, I buy them from grocery stores or bakeries.

Aldi occasionally sells macarons as a limited-time Aldi Find (Special Buy), and I like to buy a box or two to stash in my freezer. They’re a solid choice and reliably good whenever I buy them. 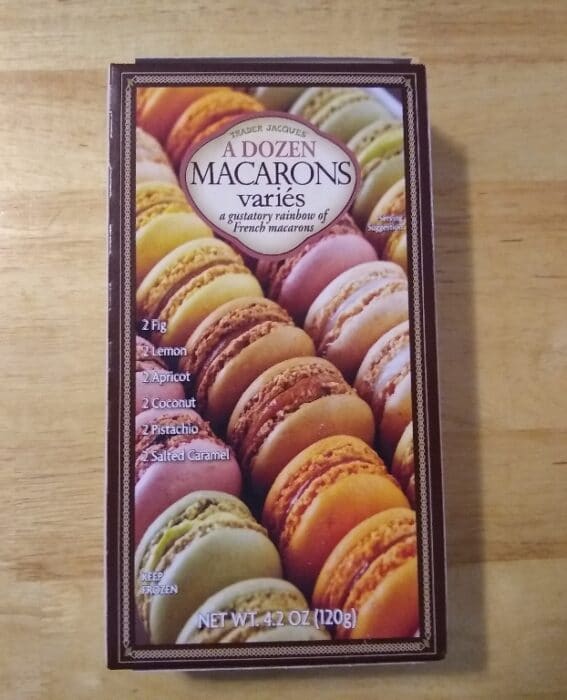 Trader Joe’s Trader Jacques’ A Dozen Macarons Variés cost $4.99 at the time of publication for a 4.2-oz. box containing 12 assorted flavors of macarons. That comes out to about 42 cents per macaron.

They are a product of France, and the box has two macarons in each of the following flavors: fig, lemon, apricot, coconut, pistachio, and salted caramel.

They should be kept frozen, and when you are ready to eat them, defrost them for about 30 minutes before serving. Once thawed, they should be stored in the refrigerator and eaten within two days.

They also have a few more processed ingredients such as glucose syrup, carrageenan, soy lecithin, xanthan gum, and natural flavors.

If you’re watching out for allergens, these contain almond, pistachio, coconut, egg, milk, wheat, and soy. They may also contain traces of peanuts and other tree nuts. 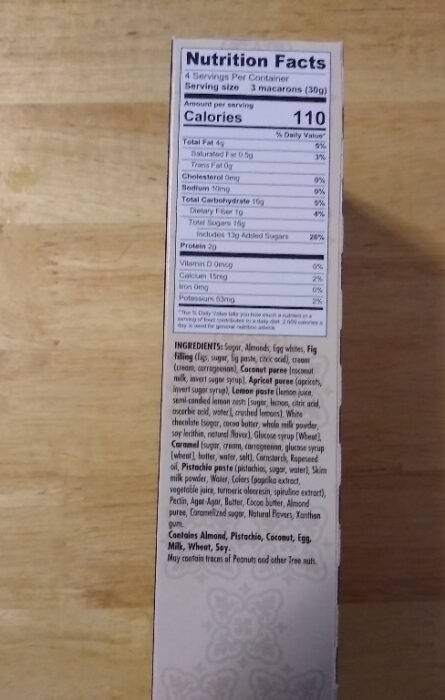 As for how these macarons taste, they are fabulous. In fact, just the day before I tried these Trader Joe’s macarons, I bought some macarons from a local bakery at $3 a piece (they were large, but pricey). I liked the Trader Joe’s macarons far better than the local bakery macarons both in terms of texture and taste (and the TJ’s ones are less expensive than the ones at the bakery I visited). 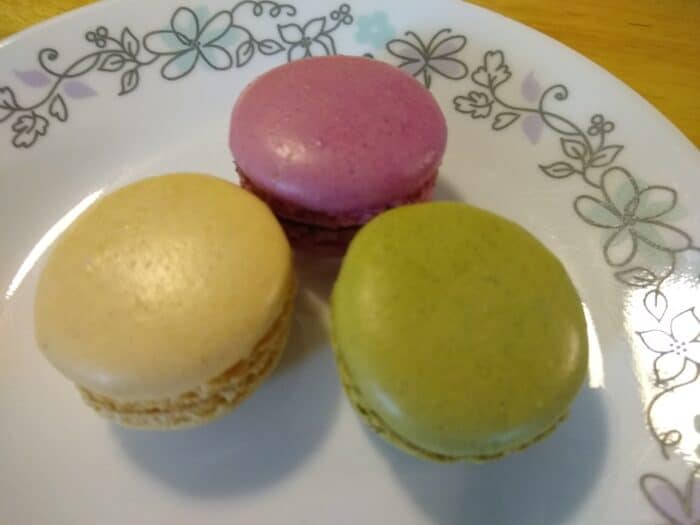 A few macarons up close: coconut, fig, and pistachio. My family ate them so quickly I could’t get a picture of the other flavors.

The TJ’s macarons were full of distinct flavor, and I could definitely tell which flavor I was eating. The lemon flavor was a person favorite of mine, and my daughters named lemon, apricot, and pistachio as their favorites. There really isn’t a bad flavor in the box, unless you aren’t a fan of fig, which was my least favorite.

The Trader Joe’s macarons were spot on with texture as well. The shells were crisp on the outside and soft on the inside, and the middle with the filling was soft and chewy. Perfection!