Cauliflower is popular, as evidenced by all the riced cauliflower, cauliflower crust pizza, and cauliflower meals on the market. Also, Chinese takeout food has long been a favorite in American cuisine. So when I saw the perfect mixture of these two things at Trader Joe’s, Aldi’s cousin store, I picked up a bag to try at home. 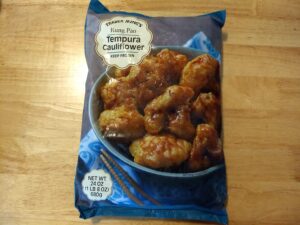 Trader Ming’s Kung Pao Tempura Cauliflower sold for $5.49 at the time of publication for a 24-oz. bag.

It’s sold frozen, and the package states that “large cauliflower florets are enrobed in a light tempura batter. They bake up crispy on the outside, tender on the inside. Toss them with the spicy kung pao sauce” for “big bang with every bite.” Trader Joe’s recommends serving the cauliflower as “an appetizer, an entree with steamed rice, or as a vegetarian side dish for a meat-centered meal.” 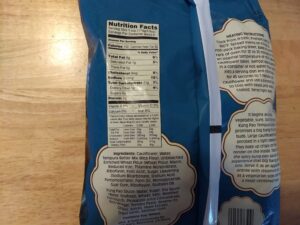 Despite the batter, it is fairly low in carbs, coming in at fewer than 10 grams of carbohydrates per serving.

The main ingredients are cauliflower, tempura batter mix, and kung pao sauce, although there are some additives such as guar gum and xanthan gum, as you might expect with a processed meal.

This meal contains soy and wheat.

The Tempura Cauliflower is prepared in a conventional oven. To cook it, preheat the oven to 450 degrees. Spread the cauliflower evenly on a lined or non-stick baking sheet. Bake on the center rack of the oven for 20 to 25 minutes or to an internal temperature of 135 degrees.

While the cauliflower bakes, defrost the sauce packet in a container of hot water. Pour the sauce into a serving dish and microwave for 45 seconds to 1 minute. Add the cauliflower and use a slotted spoon to toss with sauce until evenly coated. Serve right away.

I liked the Kung Pao Tempura Cauliflower, although it was on the spicy side, which was not surprising since it’s kung pao. The rest of my family — even some members who can handle pretty spicy food — did not care for this cauliflower dish, though.

The batter baked up crisp, complementing the soft steaming cauliflower inside. It was a nice combination of textures, and it tasted and looked similar enough to traditional meat dishes like General Tso’s chicken or orange chicken that it would certainly make a suitable meal if you’re wanting to avoid meat.

If you really wanted to, you could omit the sauce pouch included in this meal kit and use another sauce of your choice, especially one that is less spicy if you prefer, such as teriyaki.

Trader Joe’s Trader Ming’s Kung Pao Cauliflower lives up to its name and has plenty of kick. I didn’t find it overly spicy, although it was too much for the rest of my family, even the members who like spicy stuff. You could omit the included sauce pouch and substitute a milder Asian-inspired sauce like teriyaki if desired. This meal makes a good replacement for takeout entrees that are meat-based like General Tso’s chicken, or it’s a good vegetable side dish alongside the rest of your meal. The batter bakes up crisp around tender cauliflower and makes for a satisfying taste experience.