If you shop at both Aldi and Trader Joe’s, you may notice that the stores carry many similar products. This could be due in part to the fact that they are related (but not identical) businesses. It could also be because they both follow food trends and offer products they know consumers are likely to buy.

One of Trader Joe’s top sellers is its frozen Mandarin Orange Chicken. Aldi also sells a frozen Mandarin Orange Chicken under the Fusia line. Both stores also sell other Chinese-American style foods, such as fried rice and egg/spring rolls. So we here at Aldi Reviewer (who are friends in real life, too) decided to get together and have a Trader Joe’s vs. Aldi showdown — with our combined four kids as judges. Because no one is as honest about food as young children. 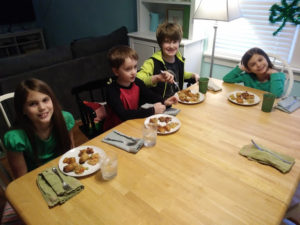 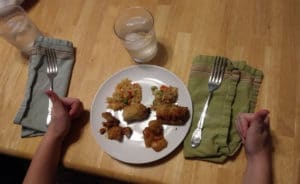 The children range in ages from 6-10 and all enjoy Chinese-American food, especially if it involves fried, sticky-sweet pieces of chicken. We tested six products in three categories: Mandarin Orange Chicken, Fried Rice, and Egg/Spring Rolls. 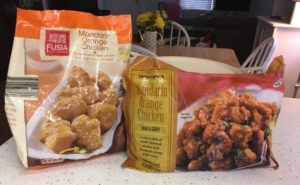 I’d never had the two side-by-side, so preparing them both at once showed how different they are. The Trader Joe’s chicken had smaller pieces with a higher ratio of breading-to-chicken. Some pieces barely had any chicken at all. We suspected that they were dark meat, too, giving it a fattier, tougher texture. The Aldi chicken, by contrast, had noticeably more chicken per piece, larger pieces all around, and you could clearly see that they were made from white meat. The children voted unanimously in favor of Aldi’s chicken, and the adults agreed. 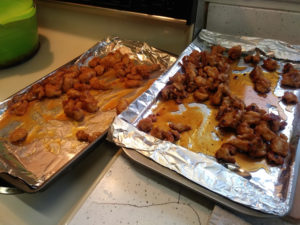 We also liked the Aldi sauce better. Both sauces are very sweet, but the Aldi sauce has just a little heat to it, too, that makes it more interesting. And although both packages retail here for $4.99, the Trader Joe’s bag held 22 ounces, and the Aldi bag held 26 ounces. Altogether, the kids and the adults all recommend Aldi’s Mandarin Orange Chicken for quality and value. 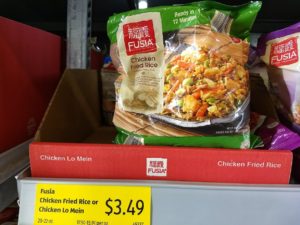 We tested Aldi’s Fusia Chicken Fried Rice against Trader Joe’s Vegetable Fried Rice. There were a lot more differences that we noticed besides the obvious fact that one of them had chicken.

First, the Aldi fried rice takes 10-15 minutes to cook, while the Trader Joe’s rice advertises “5 minutes” on the package. (I found it to be closer to 7-8 minutes, but it was still done before the Aldi version.) The biggest difference, though, had to do with sauce.

The Aldi rice comes with a sauce packet that you defrost in warm water. You add this to the mix after everything is cooked and you’re about ready to serve. This results in a wet, saucy texture with a mild teriyaki-style flavor. The Trader Joe’s rice, by contrast, has no sauce packet. Instead, the seasonings are all already in the rice and veggies themselves. This results in a drier, saltier product that more closely resembles the fried rice we’ve had in restaurants.

The other ingredients were also a little different. The Aldi rice is meant to be served as a meal or a side, so in addition to chicken, it also contained bits of scrambled eggs (which looked strange while frozen but cooked up nicely.) The Trader Joe’s mix contained no eggs but had more Asian-style vegetables, including edamame (soybeans.) 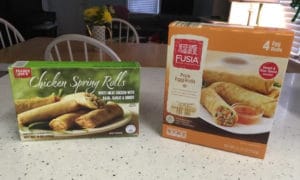 My local Aldi didn’t carry spring rolls when I shopped for this article, so I bought Fusia Pork Egg Rolls instead. (I had already bought Chicken Spring Rolls at Trader Joe’s.) Therefore, this is not a perfect comparison because some people prefer the thicker, deep-fried texture of an egg roll while others prefer a lighter, flakier spring roll texture.

If your family loves Chinese takeout but wants to save money, then Aldi or Trader Joe’s has you covered. And either one makes for an easy and fun dinner party with friends. We were pleasantly surprised that Aldi’s more humble brands won over the Trader Joe’s hipper varieties. Sorry, Trader Joe’s: I’m buying my Mandarin Orange Chicken at Aldi from now on.

Elizabeth is a content writer who specializes in scientific research and development. She’s been saving money at Aldi for years and loves the store’s organic products.
View all posts by Elizabeth →