When I was a kid, one of my favorite salad dressings was French dressing. In a world that loves Ranch, I found myself drawn to a sweeter, red dressing. Among the many dressing options out there, French and its variants are pretty far down the list in terms of popularity, somewhere south of oil and vinegar. But it’s still popular enough that most grocers stock it, Aldi included.

There are a few kinds of French dressing, each with its own distinct texture and color. Traditional French dressing is generally a pale orange and creamy, while Catalina French — also called California French, as it’s named after the Catalina Islands of California — is a bright red and somewhat less creamy. I grew up on the orange stuff, but I find them fairly similar and like them both about the same. Other people might think differently. 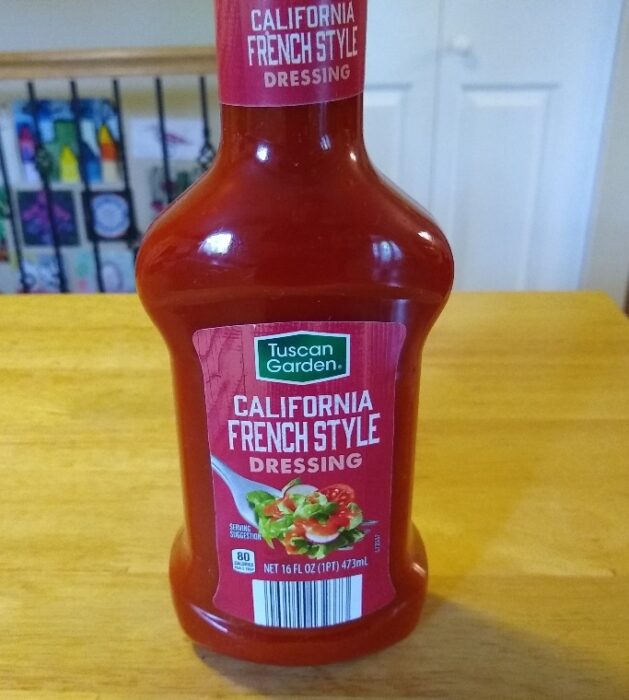 Aldi sells California French Style Dressing under its Tuscan Garden label as a Regular Buy, meaning you can find it in stores every day. At the time of this post, it cost 89 cents for a 16-ounce bottle.

Aldi’s French dressing comes in the common bottle with the plastic cap, sealed with both paper and foil. To open, you have to break the paper seal connecting the cap to the bottle, unscrew the cap, remove the foil, and then screw the cap back on. The bottle can be stored at room temperature prior to opening but should be refrigerated after opening. (You can find a best-by date printed on the bottle’s neck.)

Nutritionally, like all Aldi products, the dressing contains no artificial colors. In addition, the dressing is gluten free. Sugar is the primary ingredient, and the dressing also contains some fat and sodium. 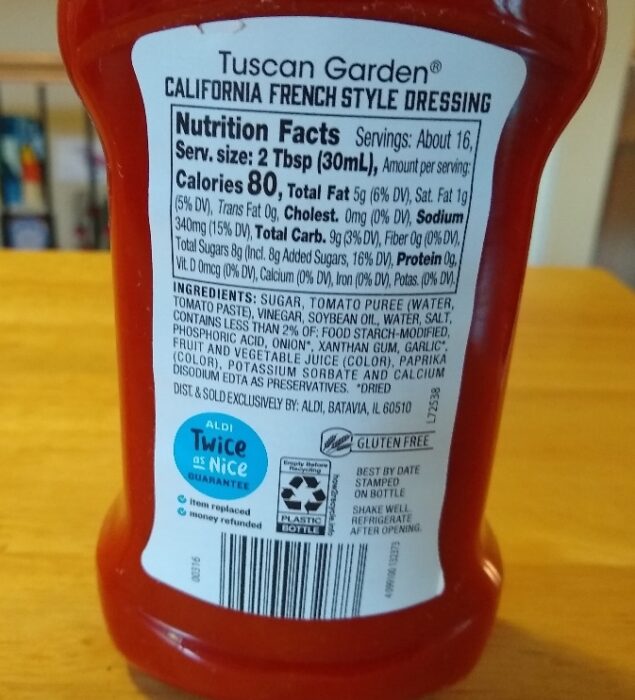 I like this dressing. It reminds me of the dressing I grew up with, with a sweet taste that complements my salad well. I didn’t detect much difference, if any, with other Catalina or California dressings I’ve had elsewhere.

If you like French dressing, or if you’re looking to experiment with a sweet dressing, this is a good one. It’s low-cost and tastes good.