In early 2018, we reviewed one of those appetizers: Appetitos Mozzarella Cheese Sticks. Here’s what we said at the time:

They’re certainly inexpensive and easy to make, but despite a decently seasoned breading, these cheese sticks are too short on the most important ingredient. The cheese factor is pretty small, which is fine if you care mostly about the breading but not as fine if you’re looking for a true fried cheese stick experience. Because of that, we can’t currently recommend them … although we can always hold out hope Aldi retools them, which it does from time to time.

Since then, we received a tip from a friend that we should give them another look. Now, normally we get said tips because a product has been tweaked and improved, but in this case the friend felt like they were a downgrade. We decided to take a look for ourselves. 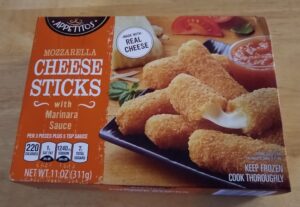 Appetitos Mozzarella Cheese Sticks are a Regular Buy, meaning you can find them in stores all the time, regardless of season. The box says it comes with 3 servings of 3, but our box only had 8. (This happened last time, too.) They’re found in the frozen section along with other everyday buys. At the time of this post, they were $1.99 for 11 ounces, or about 18 cents an ounce. That’s higher than the 13.5 cents an ounce the old sticks cost.

To bake in the oven, you preheat the oven to 450 degrees, place the sticks in a single layer on a baking sheet, bake for 4 minutes, turn, and then bake for 4 more minutes. Let stand 5 minutes before serving.

To deep fry, you fry them at 350 degrees for 2 1/4 minutes. Then you let them stand for 5 minutes before serving. (I also suggest putting them on a paper towel after deep frying.)

There are no air fryer instructions, but we did air fry a few of the sticks. We air fried them at 400 degrees for about 8 minutes, shaking them up after 4. More on this in a moment.

One other thing: you need to thaw the sauce packet, too. To do that, pour hot water in a bowl, then soak the unopened packet in the hot water for 6-8 minutes.

How They Turned Out

We baked half of our sticks precisely according to the oven, and we air fried the rest. Here’s what they looked like. 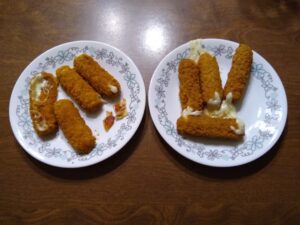 As you can tell, in both cases the cheese leaked out of the sticks during cooking. It was about equally the same for both methods. Reducing cooking time might help with this problem, so if your sticks come out like this, checking them after, say, 6 or 7 minutes might be in order.

In terms of taste, we actually liked them a little better than the old model. We thought they had a nice crispy exterior (especially when air fried) and a lot more cheese than the old sticks did. Our friend who tipped us off on these didn’t like them as much — he felt like they had an aftertaste — so this is a product where there may be some difference of opinion. The marinara, meanwhile, tasted like marinara.

Processed foods have a reputation for being high in fat and sodium, and these are indeed high in fat and sodium. The sodium for just 3 sticks, for example, is over half your daily allowance, and the fat isn’t all that great, either. By our accounting, these sticks have less fat than the old sticks but are a lot higher in sodium, so it looks like you’re exchanging one problem for another. And the nutrition label is predictably long. 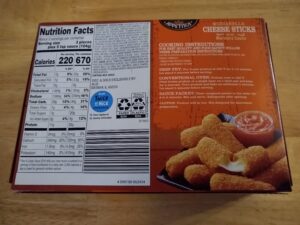 Our test of the latest (at the time of this post) Appetitos Mozzarella Cheese Sticks is a mixed bag. We like the taste (although not everyone we know agrees), but they leaked cheese during cooking. They’re also, as you would expect, not good for you. We think they might be worth trying as a novelty appetizer, but we’re not sure they’re quite ready for the prime time of a big party, at least not without some experimentation first.