A few months ago, I was intrigued by the Venus flytrap plants Aldi offered as a Special Buy. As an amateur naturalist, I couldn’t resist. I bought one, brought it home, searched online for information on how to keep the plant happy, and was soon using tweezers to feed it small ants and fruit flies. 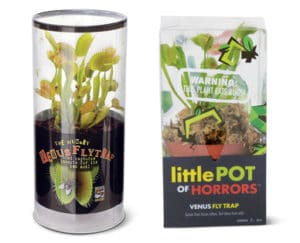 I’ve always enjoyed growing things and have a small collection of low-maintenance houseplants. My track record for keeping houseplants alive is not perfect but is probably better than average.

I’ve had my Venus flytrap for about seven months now, and while I don’t think it looks as large or as healthy as it did when I purchased it, I also readily admit I haven’t put much time or effort into caring for it (meaning I haven’t fed it bugs as consistently as I should). Despite mild neglect, it is still very much alive. I can’t speak to whether it will survive for years like some of my more easygoing plants that share space in my kitchen window, but the Venus flytrap is novel and fun, it fascinates my kids, and it provides a good science lesson.

There is plenty of information online about growing Venus flytraps. You’ll want to do some research of your own so you understand what you are doing, and I am not an expert, but here are a few basics:

You can feed your plant once or twice a week by placing a small, dead bug into one of the plant’s many traps (the traps are the parts of the plant that close to catch prey). I use ants because they are, irritatingly, often readily available in and around my house. This guy on the internet uses re-hydrated freeze-dried blood worms. You can use whatever you want, as long as it isn’t raw meat, hamburger or other human food, which will make your plant unhappy.

I usually place a small ant into a trap using tweezers, being sure to brush against the inside of the trap to stimulate it to close. Then, I encourage the trap to seal completely shut by gently rubbing both sides of the closed trap with my fingers. (It’s completely okay to touch the plant. Venus flytraps are famous for being kind of creepy, but they don’t bite or hurt people in any way!) This rubbing motion simulates a live bug moving around inside the trap and tells the plant to start the digestion process. Digestion takes a few days, and eventually the trap will reopen and the empty “shell” of the digested bug will fall out.

An important tip: Don’t feed your plant bugs that are too large. The trap won’t be able to digest the bugs and they will rot inside the traps, leading to an unhealthy plant. 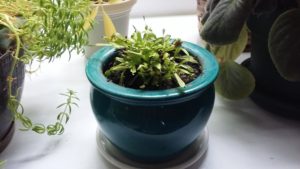 My re-potted Venus flytrap. It lives!

A few weeks ago, I re-potted my Venus flytrap for aesthetic reasons. Whenever I watered the plant in the plastic container it came in from Aldi (I had the cylinder-shaped container shown on the left in the first picture in this post), a small amount of dirt washed down into a narrow space between the bottom and sides of the container, and I couldn’t clean it out. The original container was looking messy in my kitchen window among my other tidy houseplants. I used a small, decorative pot I had on hand. The internet has mixed advice regarding whether Venus flytraps prefer a high-humidity terrarium-style type of container versus a regular open pot.

Venus flytraps seem able to tolerate some mild neglect and should last at least a few months in your home, if not longer, so don’t be scared away if you lack a green thumb. Just try to keep the soil damp and feed the plant when you can. Venus flytraps are fun to learn about, kids love them, and they make for good conversation pieces when you have company over. Recommended.