Skip to content
Home Features Aldi US is Testing Self-Checkout

Aldi US is Testing Self-Checkout

Aldi checkouts are pretty legendary. They’re fast … so fast, in fact, that some people hate how fast they are. This isn’t just anecdote, either: Aldi consistently ranks high for its checkout speed. Aldi workers are trained for speed, and they’re helped by the fact that Aldi usually puts bar codes on several sides of a package to make it easier to scan.

To date, Aldi has used an entirely employee-driven checkout process. This is different from many grocers and retailers that have, in recent years, rolled out self-checkout. Self-checkout is a polarizing subject: some shoppers like them, especially for small purchases, while others complain that they don’t work as well or are being used to phase out paid workers.

I’ve long wondered if Aldi would ever experiment with self-checkout. After all, Aldi has been willing to experiment in other areas, including grocery delivery and curbside pickup.

I don’t have to wonder any longer.

The Aldi self-checkout experiment has officially come to America. 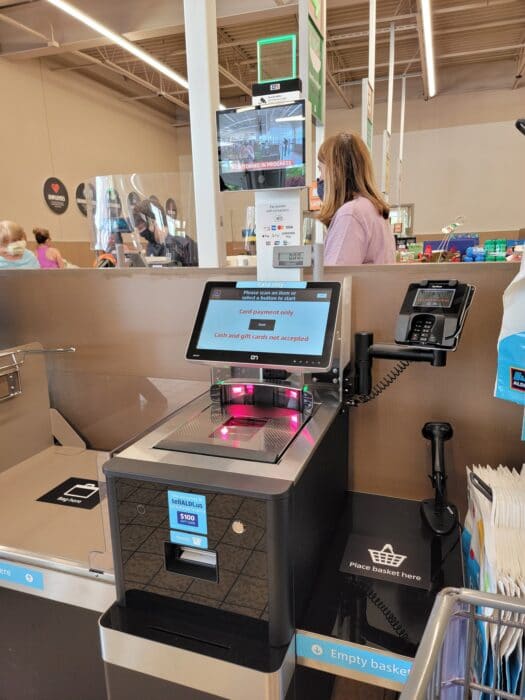 This picture comes courtesy of a shopper in northeast Ohio, just minutes from Akron and less than an hour from Cleveland. It was taken on May 19, 2021, which was, according to the shopper, the first day Aldi started using the checkout stations. The shopper told us that there were a few stations running and she was excited to see them.

“I think it could be better served and faster for very busy times,” she said, “especially when you have lines down the aisle, and only have a couple items.”

Aldi US has been pretty quiet about this rollout. I haven’t seen any public announcements by the company anywhere, which leads me to think this is something the grocer isn’t going to make a lot of fanfare about. It is also likely a pilot project at this point, to see how well they work. Aldi is a company focused on efficiency, so the grocer will likely look to see if self-checkout helps keep things moving in the exits. If it does, expect to see more of them in stores, although it could take a long time to see them throughout the United States.

This may be part of a larger international strategy by the grocer. Aldi UK has placed self-checkout in a handful of its stores over the last two years, and Aldi Australia has just launched its own self-checkout trials in the last few weeks.

Time will tell what the future holds for self-checkout lanes at Aldi. We’ll be watching with interest.