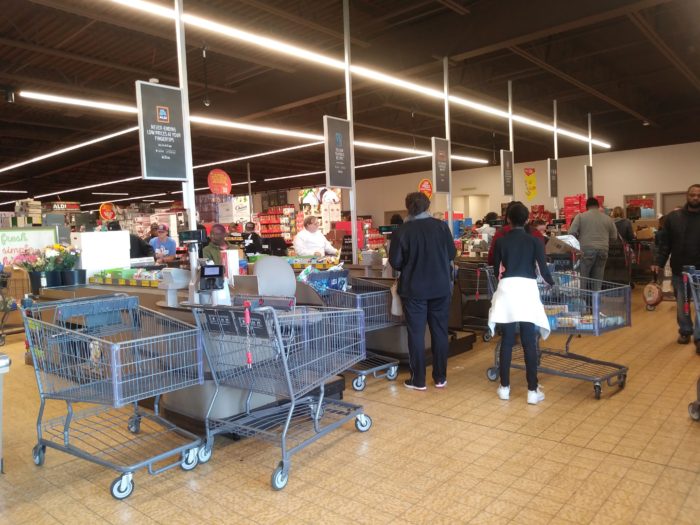 A busy checkout day at our local Aldi.

The checkout aisle is the finish line of any shopping experience, but it’s also one of the most important parts of a shopping trip … in our minds, at least. Because no matter how easy or hard it was to find everything we needed in the store, the exit can make or break the experience. I’ll be the first to admit that I’m liable to judge my entire shopping experience just by how the checkout goes. It’s not on purpose: it’s because it’s my last impression of the store, and that last impression naturally sticks with me even as I head out to the car.

Both Aldi and Trader Joe’s generally score well in the checkout department, but they get there in different ways. Here’s what we’ve observed after our many trips through both stores.

One thing that stands out to me is the different way the two stores lay things out. When you arrive at the Aldi checkout, you see a setup not unlike most grocers: a checkout lane with a moving conveyor belt for setting groceries, and plastic dividers so you can separate your groceries from the person behind you. Up ahead, the Aldi employee is stationed at the register, scanning everything through.

One distinctive for the Aldi employee is that Aldi workers sit at the cashier’s station rather than stand. This isn’t because they’re lazy — it’s a European way of doing things. Because Aldi employees otherwise do a lot of running around, this saves their feet for when they really need them.

Trader Joe’s on the other hand, is quite different. There’s no conveyor belt and no dividers. In fact, customers don’t handle their own groceries at all. (More on this in a moment.) Instead, TJ’s registers consist of a couple of spaces, one for setting groceries and one for bagging them. The Trader Joe’s employee, unlike the Aldi one, is on his or her feet, moving around.

As I said earlier, much of the Aldi process is mostly like other grocers. Customers load up the conveyor belt, and the Aldi employee scans the groceries. Where things differ is what happens next — namely, that the Aldi employee then deposits the groceries in the cart behind them. As most shoppers know, Aldi employees don’t bag groceries, so that falls on customers to do on the counters behind the registers after the transaction is complete.

Trader Joe’s on the other hand, is a pretty different experience — a more white-glove treatment, if you will. Customers don’t handle their own groceries at all. Instead, the TJ’s cashier (who, in my experience, often wears gloves) picks the groceries out of the cart, sets them on the register area, and then bags them and sets the bag back in the cart. The cashier then hands the receipt over, leaving the customer with nothing else that needs to be done except to depart.

Most Aldi employees I’ve interacted with are friendly. They tend to say hi, and they’ll sometimes make small talk, too. I’ve found them to be helpful as well, answering any questions I may have. I’ve watched other customers strike up conversations with Aldi employees, and the employees are always approachable.

Trader Joe’s cashiers, meanwhile, operate on a different social level. The store’s employees have a reputation for being trained to be sociable, and more often than not I’ve seen it. During a recent TJ’s run I had the employee ask about what my wife and I were up to, and when we answered, he asked follow-up questions and made comments with all the signs of a person who was actually engaged in the conversation. Not every TJ’s employee is that engaging, but they are perhaps the most conversational employees you’ll ever meet. Whether this is your cup of tea probably depends on how sociable you’re feeling that day.

Aldi does speed. No getting around it. Aldi employees are trained to move products through fast, with the ability to hand-code products as fast as scanning them. Aldi products are likewise built for speed, with bar codes on multiple sides so that scanning doesn’t require the cashier to turn the boxes over much. Some people actually complain about the speed, but in my experience it’s a welcome sight, especially after a long day.

Aldi’s speed doesn’t just extend to individual cashiers. Aldi flexes its employees around the store, so if lines get too long, workers stocking shelves redeploy over at the checkout lanes to reduce congestion. Many times I’ve stood in a long Aldi checkout line only to have multiple reinforcements appear from all over to divide up the customers and reduce the load.

Trader Joe’s isn’t quite as speed-based, but there’s no question that speed is part of its DNA. TJ’s workers move fast, and they bag fast. Like Aldi, TJ’s also seems to flex its workers — I’ve been in TJ’s before when cashiers appear to reduce line congestion. What’s more, I’ve been in situations where a second worker has appeared at my lane to help the first bag my groceries. (Keep in mind that this all goes on even while the TJ’s cashier is carrying on the aforementioned conversation.)

You can’t please everyone, but I can say that overall, I like both the Aldi and Trader Joe’s checkout experiences more than most other stores. No offense to the workers who work at, say, Walmart or even Target, but Aldi and TJ’s have an elevated game that I don’t see elsewhere.

And I respect the ways the two small-inventory grocers excel by doing things differently from one another. I appreciate the raw speed and efficiency of Aldi’s checkout process, while I also respect the sociability and upscale treatment that Trader Joe’s dishes out to its customers. I also appreciate how Aldi employees, while not as sociable as TJ’s employees, are still polite, while TJ’s employees, while not as blazing fast as Aldi employees, are still pretty fast.

I’m also mindful of the fact that the differences between the two also reflect the bigger way they do business. Sure, Aldi doesn’t bag groceries like Trader Joe’s does, but Aldi prices are also mostly lower, which, I think, makes the trade-off worthwhile. On the flip side, while TJ’s is more expensive than Aldi, I have still found it to be competitively priced compared to many other traditional grocers, while delivering a customer service element that is above other similarly priced stores.

In short, there’s a good reason why Aldi is one of the fastest-growing grocers in America and Trader Joe’s is one of the most profitable per square foot of any grocer in America. It may begin with the way the low-inventory stores do things in the aisles, but it also includes what happens in the checkout.