What Major Areas Don’t Have An Aldi Store? 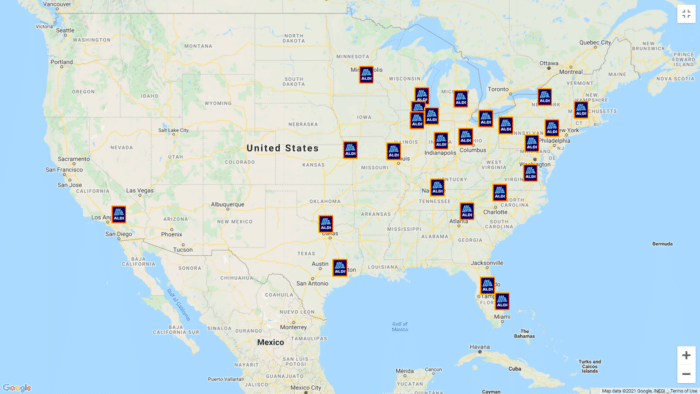 The major Aldi Divisions. Stores are usually in close orbit to these divisional headquarters. This map gives you a pretty good idea of where Aldi doesn’t have as much of a presence.

But Aldi isn’t everywhere. Not by a long shot. There are wide swaths of the United States where there is no Aldi to be found at all. This includes entire states as well as major cities. (Aldi also hasn’t yet planted roots in Canada.)

Much of the grocer’s expansion is about building inward rather than reaching out: in other words, adding stores in regions where it has a presence. That means new stores in places that already have a number of Aldi stores like Chicago and Ohio. The reason for this is that Aldi already has a distribution network in those areas, so it can add stores along existing transportation pipelines rather than having to build new ones.

At the same time, Aldi is still branching out, adding new states. This is a slower process, but also a steady one. Aldi will grow into new places if it can make money.

Here I want to run down some of the regions where Aldi currently doesn’t have a presence. Keep in mind that since Aldi is constantly growing, this list could change. For example, it wasn’t that long ago when Arizona didn’t have a single Aldi store; now Phoenix has several.

Much of the Great Plains and Pacific Northwest 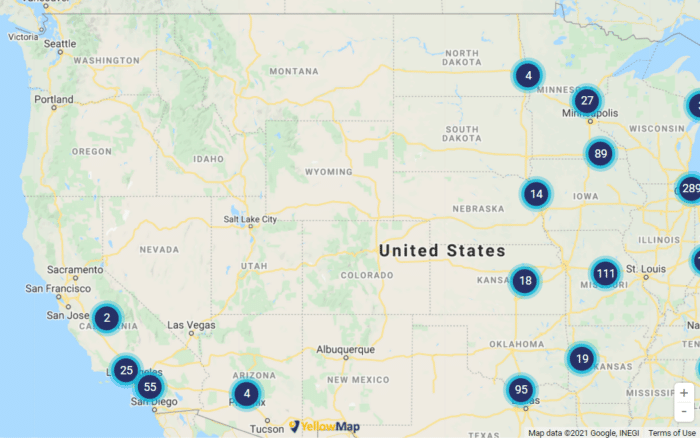 The largest Aldi desert in the U.S. is unquestionably the corridor that stretches from the Pacific Northwest down to parts of the Great Plains and even the Southwest. There are currently no Aldi stores in a block of states that includes Washington State, Idaho, Montana, Oregon, Wyoming, Nevada, Utah, Colorado, and even New Mexico. You could also throw in North Dakota, South Dakota, Nebraska, and Kansas, which only have stores in the eastern parts of their states.

Given Aldi’s current growth in the Southwest, it would seem like New Mexico would be a candidate for stores sometime in the future. Places like Seattle, though, aren’t likely to get one anytime soon.

Aldi first opened stores in the Golden State back in 2016, centered around Moreno Valley, located east of Los Angeles and north of San Diego. Since then, the grocer has slowly been inching its way north, reaching as far as Fresno. Major cities farther north like San Jose, San Francisco, and Sacramento currently remained untouched. Those regions are definitely on Aldi’s radar, though, and will probably get stores sooner rather than later.

It probably won’t surprise anyone to know that Aldi does not currently have any stores outside of the lower 48 states. That means no stores in Alaska or Hawaii. Given how expensive it is to transport food and goods to those states, I would expect that they’ll probably be the last places to get an Aldi store … if they ever get one at all.

All of Louisiana and Most of Mississippi

Curiously, all of the Pelican State and nearly all of the Magnolia State lack Aldi stores, despite being bracketed by states that do have Aldi stores such as Texas, Alabama, and Tennessee. In Mississippi, that means there are no Aldi stores in Biloxi or Jackson, while in Louisiana that means there are none in Baton Rouge, New Orleans, or anywhere else. There are a few in far north Mississippi, where the suburbs of Memphis extend across state lines, as well as a single store in northeast Mississippi and a solitary one in Tupelo, located in the middle of the state.

Aldi has indicated this will change, with dozens of stores planned along the Gulf Coast. As of this post though, not so much.

Aldi extends fairly far north into New Hampshire and even Vermont. As of right now, though, there are no Aldi stores in the country’s most northeastern state.

Aldi is in the midst of an aggressive growth plan. That means areas above listed as lacking Aldi stores could well become places that have Aldi stores. We’re already seeing states like California, Arizona, and Mississippi get a trickle of stores, and more are on the horizon.

In the meantime, if you happen to live in a place with no Aldi … I’m sorry. May you get an Aldi store soon.