Aldi has quite the selection of outdoor gear as part of its rotating ALDI Finds during the summer, especially where camping is involved. While some of it falls under the Crane label, most of it is under the Adventuridge house brand. We’ve tried out Adventuridge products large and small, from flashlights to tents.

This little product is one of them. 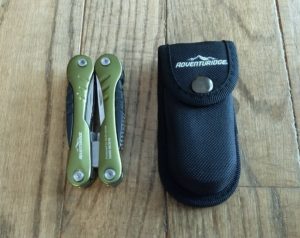 First off, a disclaimer: our experience is with the 2018 Adventuridge 15-in-1 Multitool, while in 2019 Aldi released the Adventuridge 17-in-1 Multitool. Despite the different names, though, the only difference between the two that I see is the keychain. (The other difference in tool numbers comes from the fact that, while both tools have a ruler on the scale scraper, the 15-in-1 does not list it as one of its tools.) For that reason, just about everything we think about the 15-in-1 probably applies to the 17-in-1.

Here are the tools on the 17-in-1 Multitool: 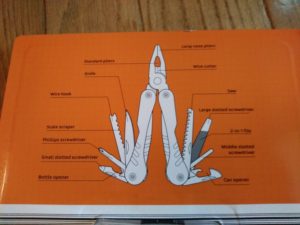 The schematic of my 15-in-1 multitool. Mine does not have the keychain, although it does have a ruler (not listed for some reason) on the scale scraper. (Click to enlarge.)

As you can see, there’s a lot here. 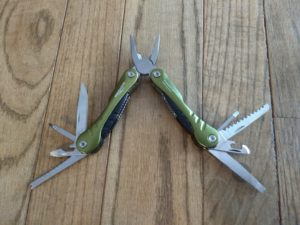 A few observations about the multitool. One, it appears to have a good build quality, with a heft to it. It doesn’t feel cheap at all, which is saying something for a $6 all-metal product.

Two, all the tools feel sturdy and work well. We’ve used many of them in the year we’ve owned the tool, and they all work as they should, whether they are for cutting, clipping, opening, or clamping.

Two, this is not a small tool. That’s both a negative and a positive. 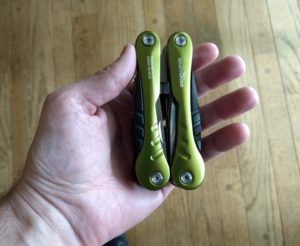 On the positive side, it’s easy to hold and use. Where it can be a chore to pull out the parts on a smaller multitool, especially if you have big fingers, it is easier to get to the tools and use them with this one.

The negative is that it’s less portable. It is small enough to fit in a pocket, but it takes up a fair amount of space in said pocket. It’s also heavy enough that I would be judicious about what I hooked it to using the keychain. If you’re looping it to, say, a belt or something, that would probably be fine, but I would not recommend looping this in with your keys.

If you need a multitool with a good build quality and a lot of options, this is definitely worth a look. It’s easy to use, has plenty of features, and it’s only $6. While it doesn’t have a warranty, I’ve used one for a year and it’s held up just fine, including during use in several camping excursions. Recommended.