EDITOR’S NOTE: Updated below with a one-year progress report as well as a 2019 price update.

Clothing and apparel are a small but steady part of Aldi’s rotating inventory. Whether it’s coats, shirts, shorts, pajamas, or even belts, Aldi tends to carry the equivalent of a wardrobe when you take the year together as a whole.

Footwear is part of the lineup, and in our experience it has improved some with time. My first experience with Aldi’s Royal Class Men’s Slippers was, to put it politely, less than ideal, but when Aldi reintroduced them a year later, they were much improved. Likewise, my early impressions with the Adventuridge Men’s Hiker Boots have been very positive. So when I tried on Aldi’s latest footwear, I was guardedly optimistic. 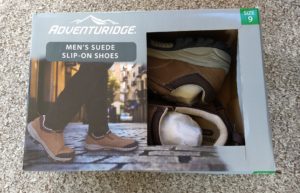 Adventuridge Men’s Suede Slip-On Shoes, an ALDI Find (Special Buy), released in the late fall, right before Thanksgiving. In 2018, the shoes retailed for $17.99. [EDITOR’S NOTE: In 2019, the shoes were a dollar more expensive, $18.99.] Not coincidentally, the shoes hit shelves the same day (and for the same price) as the Serra Ladies’ Suede Boots. 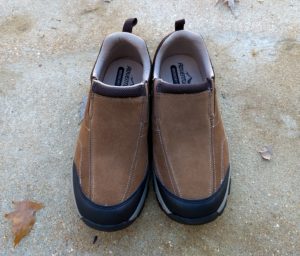 The Adventuridge shoes are available in four sizes — 9, 10, 11, and 12 — and can be found in either black or brown. The top of the shoes are genuine suede, while the outsole is “rugged” TPR and the insole contains memory foam. The shoes are, as the name suggests, slip-on shoes, with twin elastic gores to help the shoes stay on once you’ve slipped them on.

The first thing I noticed about the shoes is that they fit exactly as advertised. Not too large, not too small. They slipped on relatively easy and stayed firmly attached to my foot. They fit well both at the toe and along the sides of my foot. The shoes are also comfortable, thanks to the memory foam, and have a firm outsole that, like the Adventuridge hiking shoes, seems well-suited for places where the terrain is a bit rough.

For me, the biggest difference between name brand and lesser brand shoes often comes down to durability. I don’t know what the lifespan will be on these shoes, and that’s something I’ll be updating as time goes on. 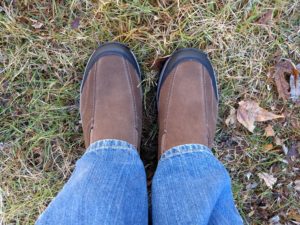 UPDATE (November 2019): After a year of occasional use, my shoes have held up pretty well. They are still intact, and the memory foam is still fairly comfortable. I know someone else whose shoes didn’t last after a few months of daily use — and he also reported that his memory foam started compressing — so your mileage may vary. Still, they’re not bad budget shoes.

The Adventuridge Men’s Suede Slip-On Shoes are comfortable, with a rugged outsole, and they fit as advertised. At only $18.99, they’re also budget shoes, so I don’t know yet what their durability is. Still, for the price they’re definitely worth a look.