EDITOR’S NOTE: Updated below with a four-year progress report.

Spring and Aldi are synonymous with camping supplies: tents, bedding, backpacks, lighting, and the occasional wearable sleeping bag. They’re all Special Buys (Aldi Finds), which means they’re here until they’re sold out, not to be seen again until next spring.

In the camping supplies department, the bedding has to be one of the grocer’s more robust segments. Want a cot? You can find it. Want a self-inflating sleeping mat and pillow? You can find both. Want an air mattress? Yep, you can find that, too. 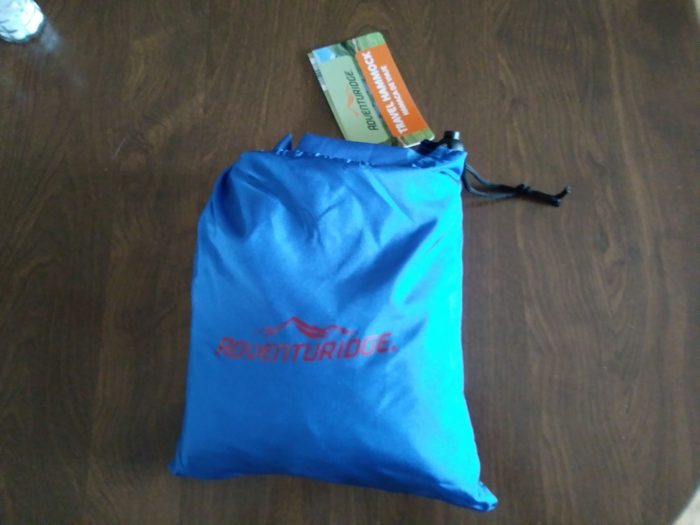 The Adventuridge Travel Hammock retails for $14.99, which is less than most other travel hammocks out there. It comes in an unassuming little bag which contains the hammock itself, two carabiners attached to the hammock, two ropes, a manual, and a warranty card. The warranty, incidentally, is for two years.

One of the first things you learn when unpacking the hammock is that the bag actually is the hammock. Much like the foldable duffle bag, the hammock bag turns into an attached storage bag when the hammock is completely unfolded, and it’s used to stuff the hammock in when packed. It’s a nifty design, and it helps to make sure you’ve got at least one thing — the bag — that you’re not going to lose.

Setup isn’t overly complicated. The two enclosed black and red ropes (“guy lines”) are wrapped around two nearby trees, looping each guy line through a pre-stitched end loop that helps to affix the guy lines to the tree. The ropes are then each attached to the hammock by way of the carabiners. Helpfully, each of the guy lines has multiple loops along the length of the guy line, so you can hook the guy line into the carabiner at whatever length you need to create a tight fit. 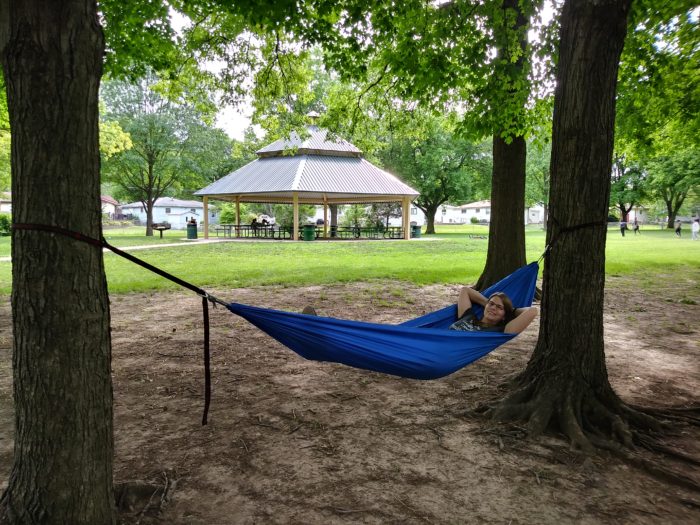 There are some limitations to the hammock. One, the guy lines are each about 8 feet long, which sounds like a lot until you realize that a good amount of that distance is used up looping around your trees. In practice, your trees have to be fairly close to each other for the hammock to be useable. The hammock itself is about 9 feet end-to-end, so in our experience you’ll want to try to find a pair of trees that are, say, 11-12 feet apart, give or take.

Once we found a pair of suitable trees, it took us maybe 10 minutes or so to set up the first time, and we found the hammock to be comfortable, although the material is not quite as thick as more expensive hammocks we’ve used in the past. As far as travel hammocks go, though, this one feels pretty good and we expect the materials to last a while.

One final note: the hammock has a weight capacity of 330 pounds, so be aware that larger users may not be able to use this.

UPDATE (June 2022): This hammock continues to hold up well after four years of occasional use. We also purchased a second one in 2021 that is very similar in design to the 2018 model and has also held up well since purchase.

It’s got some limitations on the part of being a travel hammock, but as a combination of portability, comfort, and price you’re not going to easily do better. If you’re looking for something compact that you can stretch between trees on your next camping expedition, this is worth a look. The 2-year warranty is a nice extra.