Aldi runs a significant camping lineup every spring, from tents to cookware to backpacks. Bedding is also in the lineup, including a camping cot, a self-inflating sleeping mat, and a travel hammock, all under the Adventuridge label. Each type of bedding has its pros and cons: cots are comfortable but heavy, sleeping mats are light but thin, and hammocks are compact but limited. As for airbeds, they are reasonably comfortable, light, and store quite compactly for such a large surface, but they can also puncture under the right circumstances.

My favored sleeping surface is a cot, but for most family trips I opt for an airbed. Aldi sells a few different varieties, including this queen-sized: 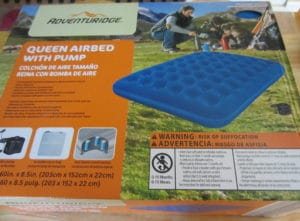 The Adventuridge Queen Airbed with Pump, which retails for $19.99 comes in a box with a queen-sized airbed, a battery-powered air pump, a patch kit, a carrying bag, and a very basic manual. The airbed is backed by a 90-day warranty and the pump has a warranty for a year. The airbed is your typical queen-sized profile, with a soft top and a more conventional rubber bottom for gripping whatever surface you’re laying it on.

The air port at one end of the airbed unscrews to a few different sizes, so there are a few different ways you can fill it. In the past we have simply used a hair dryer to fill our airbeds, but, of course, this one comes with a pump. The pump is manufactured by Bestway, which specializes in inflatable pools and other things that require air pumps. Sadly, the pump does not come with the required D-cell batteries, so you’ll need to pick up four of your own if you want to use the pump. Once you do, the batteries slide into a compartment below the pump.

The pump works reasonably fast; I’d say the airbed was nearly inflated within about five minutes. Better still, the air pump has a few sized nozzles, so you can fill the airbed most of the way with the largest nozzle, then finish the job with a one-way port on the airbed so the air doesn’t escape back out.

Our impression? We spent four nights sleeping on this airbed during a summer camping excursion, and we liked it. It’s pretty firm if you fully inflate it, and it pairs decently with Aldi’s self-inflating pillows if you need to go compact. We did have to add a bit of air after day 2, but that’s not inconsistent with our experience with other airbeds, especially large ones.

A couple of other notes. The package does come with one patch, which has simple instructions on the back. The airbed also comes with a carry bag that itself has both a drawstring to close the bag and a strap for carrying the bag. We weren’t sure how easily the airbed would fit into the bag, but it did, although 1) we’re not sure we’d put the air pump in with the airbed and 2) we’re not sure how well the strap will hold up under the weight of the bag. We also don’t know much yet about the durability of the bed, although with only a 90-day warranty, we’re crossing our fingers.

It’s your inexpensive airbed, with a pump and carrying case to boot. We don’t know about durability (especially for the bag) and we wish the warranty was longer, but for this price it’s worth a look. Just be sure to pick up some batteries if you want to use the air pump.