Come December, many retailers start stocking calendars for the coming new year. Aldi offers its own budget take on calendars. 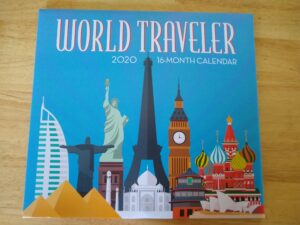 The Pembrook Premium 16-Month 2020 Wall Calendar (product code 51254) cost $3.99 at the time of publication, which is a lot less than most other calendars. It comes in several designs: sunset, puppies, Psalms, floral print, world traveler, or cats.

I opted to purchase the world traveler design, which features stylized illustrations of locations around the world, including Japan, Mexico, France, Egypt, Greece, Brazil, the U.S., India, Germany, Portugal, Italy, and England. It has a fun look to it, and I think it will be a good conversation piece, especially with my kids, because it gives an opportunity to talk and learn about international landmarks such as France’s Eiffel Tower, Egypt’s pyramids, India’s Taj Mahal, Italy’s Leaning Tower of Pisa, Brazil’s Christ the Redeemer statue, England’s Big Ben, and more. The new year kicks off with Japan’s Mt. Fuji. The illustrations and landmarks are not labeled beyond the names of the countries, so you’ll have to do your own research if you don’t know all of the landmarks; it’s a tradeoff of a budget calendar. 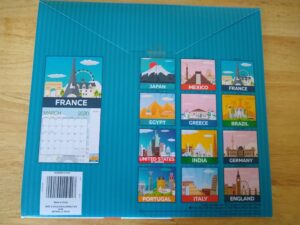 The back of the sleeve my calendar was sold in, with small images of each of the featured monthly photos. (Click to enlarge.)

The calendar’s features include:

The calendar is sold in a protective sleeve. Both the sleeve and calendar are made with thick paper that has a plastic-like feel, so at first glance this calendar seems like a durable one that will hold up well over the course of a year. I also was able to easily pen in a few appointments and events, so the embossed paper does not appear to keep you from writing important dates and memos on the calendar. 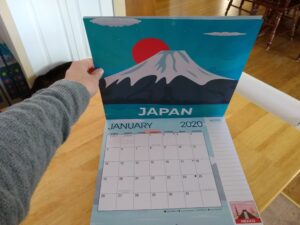 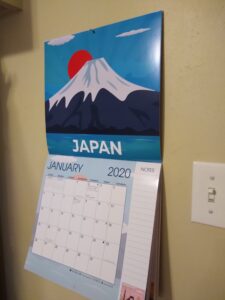 The hole on the front cover has a metal grommet that will hopefully keep the calendar from ripping (a problem I often have with other calendars that don’t have a grommet) as it hangs on its nail through the year as well. The front cover is the only place that has a grommet, though; the holes in the pages for all the months are not reinforced. 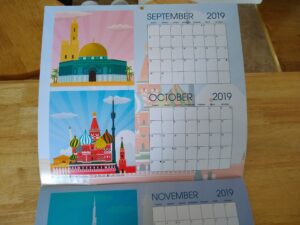 This 16-month calendar includes a page for September through December of 2019, most of which is already past. (Click to enlarge)

This is advertised as a 16-month calendar. It goes from September 2019 through December 2020, with the last four months of 2019 fit onto one opened page. Since this calendar was not sold in Aldi stores until mid-December of 2019, it’s really only a standard 12-month calendar. This appears to be common for most 16-month calendars on the market and is not exclusive to Aldi, and for $3.99, I won’t complain much. At least the extra old months have additional smaller illustrations like Russia’s Saint Basil’s Cathedral, which adds some interest.

Aldi’s Pembrook Premium 16-Month Wall Calendar comes in a variety of designs, feels durable, and features a metal grommet for reinforced hanging ability. We’ll see how it holds up over the coming year.